T Is for Thespian and Tech Crew

I sat in the middle of the theater, completely clueless as to what was about to happen.

For the past three months, I've purposely avoided discussing it.  I wanted to be surprised.  Fortunately, I have a quiet, shy boy who only talks when forced, so it wasn't difficult.

It started as most musicals do.  A full-cast song and dance.

Seventy 7th and 8th graders giving it their all to impress the sold-out crowd.

All clearly nervous, but trying their very best not to show it.  We parents can tell.

We all strain our necks, trying to pick out that one teenager for whom we are there.

We take a glance at the leads, as their voices harmonize.

We notice the couple of boys who have rhythm, owning the dance they have been taught.

The stage clears, the lights go out.

When the spotlight pops on, there, all alone, is my baby boy.

In a costume I have never seen.

In stage make-up I did not apply.

Standing behind a desk I did not decorate.

I bought the pretend microphone into which he is pretending to speak.  That's it.

He completely surprised me. 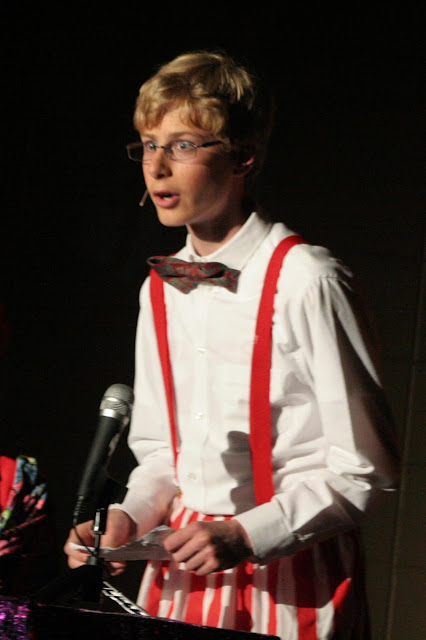 And he did it over and over again throughout the show.

It makes my heart sing to see my kids step out of their little comfortable selves and try something completely new and unexpected.

Well, folks, this was unexpected to say the least.

The music teacher at our children's school is a wonderful lady.  She actually gets all but a handful of the 580 students to stand up and sing solos in front of their classmates.  She has kids lined up wanting to be the cantor at the Wednesday all-school Masses.   And for those that cannot sing on key (like Phoenix) she will say, "This song just isn't right for your voice.  How about you do...."

And she put Phoenix in a role that involves no solo singing, but lets him shine nonetheless.

She saw something in him, and encouraged him to try.

After each of the three performances, my phone would start dinging.

"I had no idea Phoenix had it in him."

"When did Phoenix start talking?  I've never heard him speak that many words at once before."

"Phoenix was my favorite character in the entire play.  I had no idea he was such a ham."

"Tell Phoenix he did a great job!  When did he get to be so funny?"

And these were from people that know us.  People who actually have my elusive cell phone number.

As the theater emptied, I saw scads of people stop to talk with Phoenix.  Praising him.  Encouraging him.  High-fiving him.

And I saw Phoenix become more and more confident.

Buttercup, Phoenix, and I had a conversation not too long ago about how Phoenix seems to lack confidence in himself.  The way he (doesn't) talk.  The way he moves.  The way he hangs back unless someone approaches him.  He's always been like that, but this last year, with his growing 6 inches taller, it has become even more noticeable.

All in fun, we dubbed him "Awkward Giraffe".  It fit him.  He agreed.

During this week of performances, his awkward giraffishness faded.

﻿
I can't wait to see how he continues to grow and mature and become confident in himself as the years go by.  From what he showed us this week, it should be lots of fun to watch.


When the auditions took place, Buttercup was unable to audition.  She was committed to doing other things, and just had too much to do.

Three weeks ago, the music teacher approached her and said, "We only have one sound tech.  Can you be at the rest of the rehearsals and help out?"

She couldn't have been more excited.

This play has a TON of sound cues to hit.  Phones ringing, boom boxes being turned on, pianists starting their pieces, intros for her brother, not to mention all of the musical numbers.  It was a lot of work.

In the musical's program, there was a note from the music teacher.  It read, "To Buttercup and (another girl), You are the playmakers.  Thank you for doing such a great job."

I teared up numerous times this weekend.   My babies aren't babies anymore.