N is for Neglect

All six of my children have double crowns (or cowlicks for my redneck readers) on the backs of their heads.  They range in severity, but all do have them.

Giant is fortunate to have thin, straight hair that lies nicely when longer.

Star is fortunate to have relatively small crowns that don't cause too much trouble.

Buttercup is fortunate to be a girl, as she can grow her hair long and pretend she doesn't have them.

Phoenix and Turken have almost identical, thick straight hair.  Their crowns are ridiculously problematic if their hair isn't kept really short.  Which, in Phoenix's case, it rarely is.  Phoenix hasn't quite hit that low point of embarrassment in which he realizes he cannot have long hair.  He has left the house with hair practically spraying off the back of his head, but he doesn't care.  It's almost painful to watch.  Thankfully, Turken is quite happy when I cut his.

And then there's Cuckoo.  He has hit the jackpot trifecta of bad luck hair.

3.  A mother who never remembers to comb it.

I have reached a new low.

I should be ashamed of myself.

I kinda am, but the fact that I'm writing it here shows I don't feel too badly about it.

Before church on Sunday, I only saw the lad from the front while I was getting his breakfast.  Normal Cuckoo, with a touch of curly, messy bedhead.  I didn't see him again until we were getting ready to leave the house.  He puts his own jacket on by first putting the hood on, then sliding his arms into place, so I only saw him with the hood on.

We got to Mass, all in our Sunday finery, and confidently walked aaaaall the way to the 2nd pew where we always sit.  (Those with little kids, take note.  Sit up front.  I know it's scary at first, but the kids behave much better when they can see something besides the rear ends of the old people in front of them.)

We all took our jackets off, and out of the corner of my eye I saw something jump, like a spring had been unleashed.

It takes a lot for me to be embarrassed.

Obviously, being as publicly unholy as we already were, I couldn't just whip out my phone and take a photo of the debacle.  I had to wait until we got home.

Before I get to the big reveal, I must tell you that this photo was taken TWO HOURS after we first saw it.  His hair had TWO HOURS of flattening.

By flattening I mean my "Come sit on Mommy's lap so we can cuddle" then once I have him rub his head like I'm soothing him but am really trying to hold his hair down.

I was thiiiiis close to licking my fingers, but realized a little spit wouldn't work on the out of control fluff that was the back of his head.

I was thiiis close to just hocking a loogie to wet it and weigh it down at the same time.

It had TWO HOURS of gravity and hand-flattening working on it, and it still looked like this: 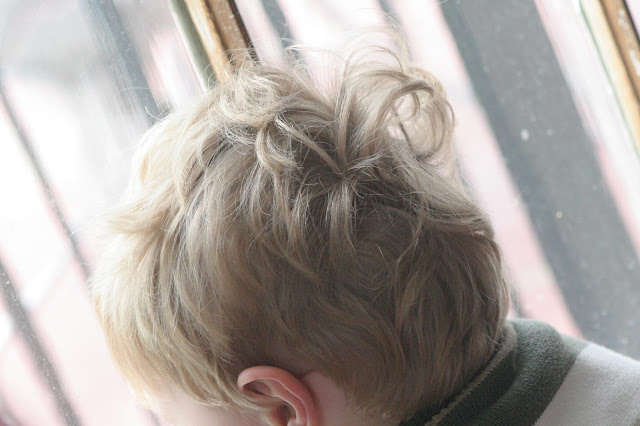 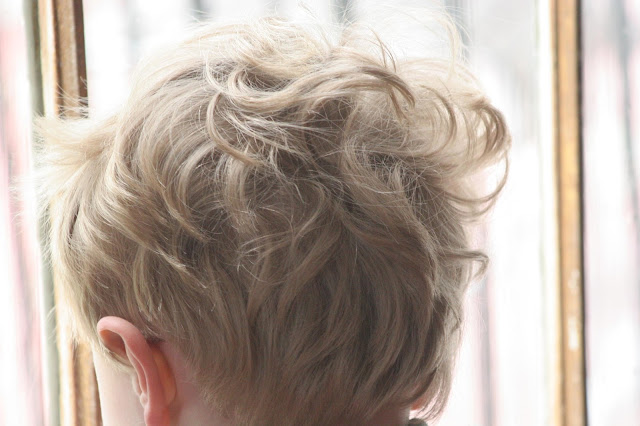 Hello.  My name is Christine, and I neglect my children.