O Is For Overcommitted and Overwhelmed

At our Family Schedule Meeting on Sunday, I told the kids to be prepared for the busiest week of the entire year.  Holy Too Much to Do, Batman!

We're busy?  Oh, how original.  Because no one else is, I'm sure.  I don't like getting into the "You think you're busy?  Listen to what I have to do..." competition that many get drawn into, including me sometimes.  Particularly when someone else starts it, gets all snotty about it, and I want to make a point.  Because I'm mature like that.

I won't go into the details about our busyness.

We'll just leave it at soccermiddleschoolmusicalboyscoutsHubby'smeetingsschoolprojectsfarmchores is a tad much.

As I've told you before, I think of awesome ideas, then forget them before I get to a computer or even pen and paper.  This is one of those times.  I had a fabulously funny segue between the above mundane and the below barely interesting, but I can't remember what it was.

We'll just have to go with a jolting change of direction.

I don't know if you know this, but it is a rule of nature that our farm gets some sort of plague every year.  Be it thousands of wolf spiders or millions of lady bug-looking beetles, something will hit us in droves.

This week, our first plague hit.  Phoenix came inside and said we had tons of bees covering the outside of our house.  Knowing the boy tends to get worked up about small things, I asked for clarification.

Well, they may be flies, but there are tons of them all over both sides of the house.

Confident they were flies, and just a handful of them, I went to take a look. 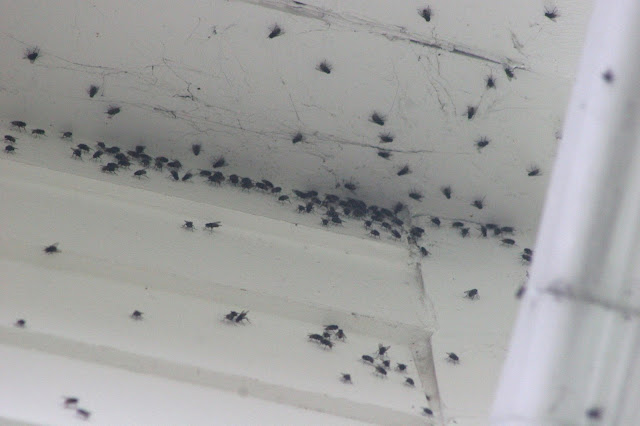 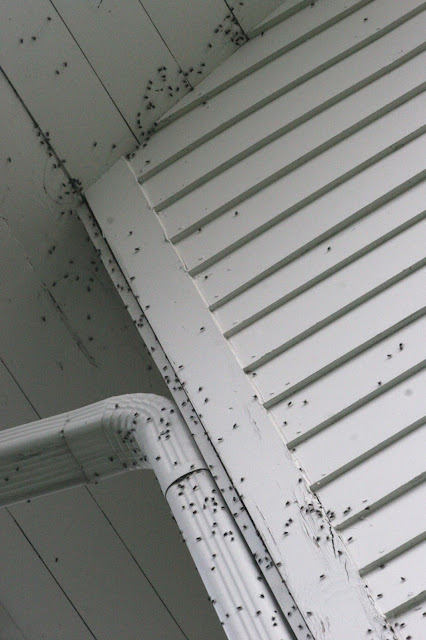 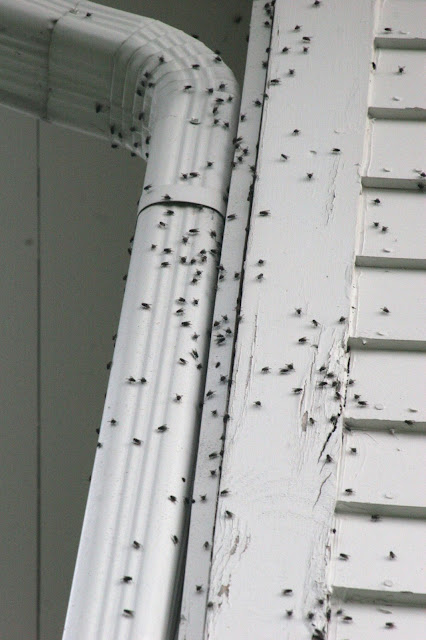 Turns out, he was mostly right.

After some investigative work (i.e. calling my mommy and daddy) I came to the conclusion that we had some sort of dead animal in the gutters.  Based on the number of flies, I would put money on the idea that a coyote somehow got on top of my house and died.

Fortunately, I never had to find out.

Before Hubby could get home and drag out the 30 foot ladder, we had a big storm.  Lots of rain must have washed away most of the remains.  The flies are almost gone.  I don't know where the animal bones are, as I haven't looked for them.

Like I said, I've been busy.  Ain't nobody got time for that.

I promise, the rest of the letter posts will be terribly witty and full of photos and fun.

Don't count on it.