My baby girl's heart is broken.

We went to her yearly check-up on Tuesday last week.  I had to pick her up from school early to get there on time, and she asked why we need to get these check-ups anyway.

I threw over my shoulder, "To see just how tall you've gotten.  And to make sure you are healthy."

We found out just how important those check-ups are.

The doctor found Buttercup's heart was skipping.  Not just once, but several times in a very short amount of time.

"It is probably nothing, but we'll get an EKG done to make sure."

36 hours after the EKG, on Friday afternoon, I got a message from the doctor on our answering machine.  She left her cell phone number.

Let's just say that it is never a good sign when the doctor leaves her cell phone number.

The EKG picked up the irregular heartbeat.  Troubling, as an EKG only measures about 30 seconds.  More troubling is the fact that it was skipping in the lower half of her heart.

Since, at the time, we didn't think Buttercup had any other symptoms, she was cleared to play in her game over the weekend.

I talked to her coach to let him know, and he said that over the last two weeks, Buttercup has been getting winded at practice.  She never balks at any drill he dishes out, but lately she has been uncharacteristically tired.

That's when I could have used an EKG.

Before we told Buttercup of the results, I asked her how she's been feeling at practices.  She said that she can't catch her breath and she doesn't know why.

Buttercup is done with soccer, gym class, recess, swimming at the birthday pool party she was invited to, playing Just Dance on the Wii, and anything else remotely strenuous until we get this all figured out.

It was a rough weekend.

Before it all sunk in, Buttercup's first response was, "Does an echocardiogram mean I'm getting a shot?"

But over the day, things began to sink in for all of us.

She realized that if we wouldn't have gone to that appointment, she likely would have been one of those kids that collapses on the soccer field after having a heart attack.

We had some crying to do.  Sitting on the side of the pool while her classmates swam and had a great time was not easy.  Especially since only three people actually knew why she was sitting out.

But we had time to laugh, in a twisted sort of way.  Like when she and Star were getting into an argument.  We heard her tell him, "Don't you be getting my heart worked up.  You'd feel terrible if something happened!"

We had time to be normal.  Luckily, we had already planned on taking Buttercup and two friends to a movie.  It ended up being several hours at our house, a movie, dinner, and straight to the pool party.  She was able to talk about things with her friends, joke around, and just be her 12 year old self for a while.

As with most things, you just go through your day to day until something very unusual happens.  And you are slapped into reality that life is fragile, things do happen, and you will have to deal with them.

We have one of the best children's hospitals in the nation just a short drive away.  Buttercup will be fine.  Whatever is actually causing this skipping will be fixed.

That doesn't mean that we aren't all scared.  Anxious to get these tests done to see how good or bad the news will be.  So we can stop crying and move on to the next step.  So we don't have to constantly be wondering if she's doing too much.

I just wanted to keep her home with me today, nice and safe on the couch.

But I just couldn't do it.  All we would be doing is thinking through the what ifs all day long.

Today will not be an easy day at school.  Word will spread like wildfire, as all news does in a close-knit Catholic school.  She's going to hate all of the attention, pitiful looks, and discussions.  Of course, she has gym class today, so that will alert everyone to the fact that she is not normal today.  Which we all know is a horrible curse in middle school.

The teachers and administrators are fantastic, though.  They will be watching like a hawk, but in a way that the kids won't see.  And they will swoop in and get her out of any situation that overwhelms her.

Two weeks ago, Buttercup got a new piano book full of songs from popular movies.  On Saturday, as I was typing an e-mail to friends about the situation, Buttercup started playing a song she has been working on ever since she got the book, well before the discovery of the skipping.

She didn't realize what song it was unitl I started sobbing.

She was playing, "My Heart Will Go On" from the Titanic movie.  And she played it beautifully. 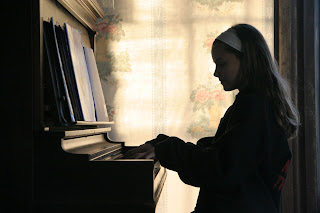 We are praying that we will find something simple, like a potassium imbalance that can be treated with some medicine.

But we know that whatever happens, God is watching over us.  He will get us through this.

And she will be fine.

Stronger, even, for having gone through it.

Then make sure you schedule their annual check-ups.