'Cause I Am Nothing But Helpful

In the age where Pintrest is all the rage, I give you the anti-Pintrest.  Here is a craft you should NOT do with your children.  Don't think that you're going to get a cute, egg-shaped, Easter decoration to hang from the ceiling.  You won't.

Don't start with these supplies. 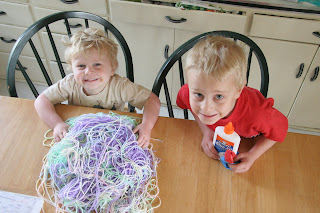 Especially the eager children.  You really don't want eager children thinking they are going to have fun making cute, egg-shaped, Easter decorations to hang from the ceiling.

Do not blow up a balloon and put it in a big coffee mug to hold it steady. 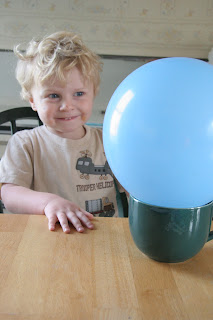 Do not water down some glue, give it to your child, and tell him to dunk some pre-cut yarn in it. 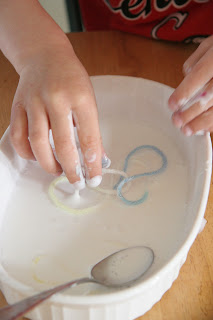 Don't have him hold the string up while he smooths out the excess glue. 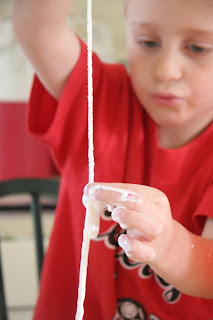 Having him put the string on the balloon is just a waste of time. 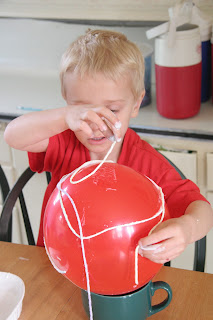 It's an even bigger waste of time when you repeat steps 3, 4, and 5 many, many times. 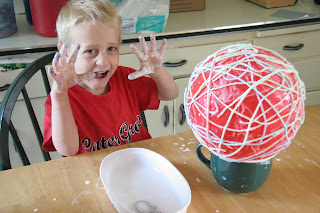 You'd think letting it dry would be a good idea.

You'd think the rest would be self-explanatory.

Most certainly do not let your four year old pop the balloon with an extremely sharp knife. 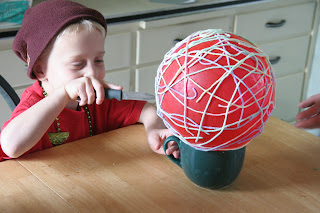 Things will not go well.  Guaranteed. 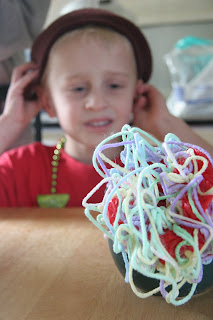 Nope, not a cute, Egg-shaped, Easter decoration to hang from the ceiling. 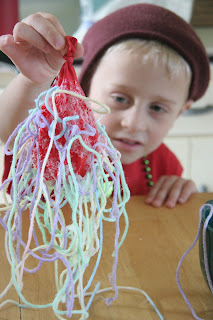 I guess the only thing I can tell you TO do is take your cues from a two year old. 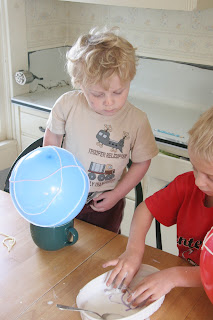 He watched me put the first string on his balloon, evaluated the situation, saw we were delusional to think it was going to work, and bailed.  He played with his cars while Turken and I carried on to shrunken-headedness.

Same yarn.  Same glue.  But instead of a balloon, we'll lay it down on wax paper and sprinkle it with glitter.