I Thought We Were Friends

I finally got to breathe a sigh of relief and stop worrying yesterday.

For ten whole nights, Buttercup was away from home.  Travelling with a friend all the way to Florida.

It's not that I don't trust the parents.  We've known them for years and have no doubts of their judgement.

As all mom's know, when your child is far out of reach, worry is going to creep in.

Worry about her safety, of course.  Accidents happen to children of the most vigilant parents.

Worry that she will be uncomfortable, as spending one night at a friend's house is very different than travelling with the whole family for ten nights.

Concern that she would get the cold her brothers were passing around before she left.

Little did I know that I was completely worrying about wrong things.

I had no idea that this was going to be the BEST VACATION EVER.  Putting all trips that our family has ever taken to complete shame.

She came home with stories of the coolest bracelets that they wore all week.  The bracelet was the key to the resort, a charge card, and a room key all in one.  Freedom was theirs.

We heard about the pier that the girls were free to go to on their own.

About the parasailing, and how the mom paid an extra $10 so the boat driver would dunk the girls twice.

We heard about the shopping, which they did because the friend had a sunburn and had to stay out of the sun.  The girls were free to go into any store they wanted, spend as much time as they wanted, and buy some of what they wanted, while the dad and dad's friend waited for them outside.

On and on and on.

And then I heard of the ultimate betrayal by our "friends".

On the way home, they made a detour through Huntsville, Alabama, to visit some relatives.

Exactly where my mom and I took the kids for spring break last year, partly to visit friends she hadn't seen in years.

Despite the fact that it was in the 50's and rainy most of the time we were there, we found lots of things to do, like horseback riding and lunch in a cave (which required us all to pile into the back of a pick-up truck taxi to go down an enormous incline to the bottom of a ravine where the restaurant in the cave was located).

One stop we made was to the NASA center.  We walked around outside and saw the shuttles and rockets that were on display. 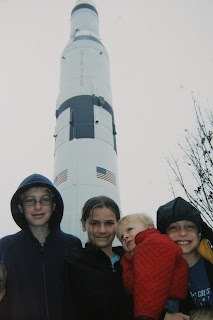 I didn't tell the kids that there was all kinds of cool stuff to do inside.  It was way expensive, and we had two little boys (ages 1 and barely 3 at the time) who wouldn't have had much fun.  Hubby and I have been doing that sort of thing forever.  We'll drive a little bit out of our way to see something that looks funny or interesting, then go on to the next thing without doing anything but take a picture.  (I know it is juvenile, but one time we went 20 minutes out of our way to see a park called "Balls Falls".  We didn't have time to go in the park, though it looked very nice.  We just needed the picture.)

So we took some photos, got in the van, and went across the street to a hands-on science center.

Bet you can guess the one place that our "friends" took the kids while they were in Huntsville.

Yeah.  They blew my cover and took them inside NASA.  Where Buttercup had the most "awesome" time doing all sorts of "awesome" things.  And came home to tell her brothers all about it.

My naive little darlings have seen the light.

I'm half afraid they are going to start pulling out the photo albums and start asking questions.

Things like, "Why is there a line of people waiting at the bottome of the St. Louis arch?"

Or "Who are the people inside of that house we are posed in front of?"

That one little act of our friends has now changed our vacations forever.

Never again will we be able to stop somewhere with no intention of going in. Eight skeptical eyes will aways be looking for clues as to better things awaiting them inside. Discussions will have to be had about why we are/are not going in one place or another. Crabbiness in at least one person will follow.  Really sucks the fun right out of impromptu funny stops.

But hey, our friends had a great vacation.  Even told us it was the best vacation for them, too.  Since Buttercup was there, everyone was on their best behavior.  Their daughter (the only in the family) had a ball, since she had a girl to hang out with for the first time ever.

So happy for them.