I don't even recognize myself anymore.

The whole redneck thing was surprise enough.  (And it's getting worse.  Anytime we pull in the driveway now, knowing that Cuckoo needs to go to the bathroom, I just pull his pants down right there in the grass and have him pee.  We don't even take the time to find a tree.)

Today I tackled a 95 pound dog.

An odd start to a day for most people, I'm sure.  For me, it was unthinkable.
When I was five years old or so, our family got our first puppy.  It was the cutest bundle of fur you ever did see.  His name was Zack.  (Every dog my dad has owned has been named Zack.  It was supposed to be my name, but it just didn't fit when I turned out to be a girl.)  Unfortunately, the puppy wasn't as fond of us as we were of him.  He bit three of us before my parents finally found a new home for him.  I was the lucky one.  He only put a gash in my hand.  He also got my sister's ear and my brother's eyebrow.

That experience made me nervous about dogs, but the dogs that lived across the street from us when we were growing up made me terrified.  They were two vicious dogs that were tied up outside the garage.  Anytime someone walked by the house, they would stretch their chains as far as they could and snarl, growl, and bark at the person.  As a first grader, instead of going to the bus stop just on the other side of them, I chose to walk the almost mile to get to the next stop.  A couple of times, these dogs got loose, and they tore across the street after us.  My mom once fought them off with a broom while we scurried into the garage.  Another time, my dad was coming home from his job as a policeman when the dogs got loose.  He actually fired his gun to keep them from attacking.

So with those two lovely first encounters with dogs, I was terrified for life.  I would be able to handle myself at someone's house if a dog was there, but if I met a strange dog on the street, I'd lose it.  Stand completely still, tears streaming down my face, praying the dog wouldn't come near me.  Awful.  This actually happened only 8 years ago.

When we bought this house, we decided that we had to have a dog.  A big dog to keep coyotes at bay.  We researched the types of dogs that would be good for us, but we didn't know that our circumstances would change.  We didn't know that we would be embracing this farm life and need a dog to protect the animals.  We simply looked for a dog that would be good to our kids and all the visitors to our home.  We found Roy through the Humane Society.  He was found walking along the river and was living at a foster home.  He was an outside dog and very friendly.  The foster owner had only good things to say about him.  So, we got the dog.  I was scared to death, but we did it anyway.  For the kids.

And this morning I tackled that 95 pound dog.  Perfect shoulder to the midsection tackle.  Got him in a headlock.  And held him for a minute or so.  All on my own.

Why, you ask, would I actually need to tackle a dog?

Because the pigs are here!

And Roy lost his ever-lovin' mind.

As Hubby and the farmer were unloading the pigs, a terrible squeeling racket was made.  I ws just arriving on the scene, camera in hand, to get some pictures of the new additions to the farm.  Roy was barking his full head off.  He seems to be getting bolder in his old age, because out of nowhere he took off and ran into the barn.

I followed, saw him getting right up into the pig's face, barking and snarling.  I didn't wait to see what he would do next.  I dashed around Hubby, who had a squeeler in his grasp, hurdled the two scared pigs already in the barn, and took that dog out.  And I did it with a camera wrapped around my neck.  Saved the day, if not my knees.

Looks like I am no longer afraid of dogs.  Who knew?

After it was all over, I was totally kicking myself for not handing the camera off to one of the kids before I jumped into the fracas.  It would have been an awesome picture.

When Hubby recounted the incident, he said that all he saw was a blur, followed by another, taller blur.  The next thing he knew, he had to save the dog from my death-grip.

Roy is safely tied up, and has been howling most of the time.  While I was out feeding and watering the pigs, I let Roy off his leash to see what he'd do.  He was digging and searching for any possible opening into that pen.  Even tried to pull a little tree out of the ground.  Basically, we have got ourselves a situation.

For now, he's tied up again.  And he'll have to stay that way unless we are outside with him. We need to make sure that pen is sealed up tight.  Then he'll be getting a shave and a new shock collar, which should solve everything.  (Cross your fingers.  We don't have a Plan B.) 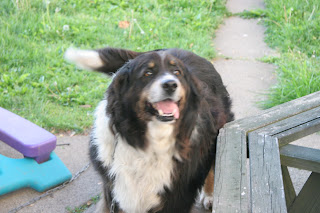 No way I'm letting him get into the pen with those pigs.


We won't be naming these hogs like we did the first year we raised hogs.  They were named Pork Chop, Applesauce, and Leftovers.  We wanted to make sure the kids knew that these pigs were going to eventually be eaten.  It worked, except for Giant thinking that applesauce came from a pig.  (That's when I realized that the kids have never seen The Brady Bunch.  A shame, really.)

Ten years ago, I never would have guessed that I would own a dog, let alone be brave enough to tackle one in a pig-crazed mind-loss.

I have always said that adventures and learning new things are wonderful.  I just hope that the next thing I have to learn doesn't come with bruises and a mouth full of dog hair.