Never before in our lives have we found ourselves in a city far from home with absolutely no reason to be there.  A wide-open, rainy day with no plan whatsoever.

Basically, a day we have always dreamed of.  A day to drive home, but stop whenever the fancy strikes.

Since we pulled out of the hotel parking lot at 11:59, the first thing to do was get some grub.  We are not fast-food people, so we drove east on I-70 until we found something.  Let me just say that there isn't alot of food that isn't fast off of I-70.

We finally came across a billboard advertising foot-high pies.

It was a little mom and pop place, where actual foot-high pies greet you at the door.  Where the decor looks just like it did on opening day many a year ago.  A place that doesn't take credit or debit cards.  A place that serves homemade meatloaf, chicken and dumplings, and fried walleye.  We feasted on it all, with a whole lemon meringue pie for dessert.

In Vandalia we found the state's oldest state capitol building.  It is where Abe Lincoln got his start in politics.  Where spitoons graced every corner.  Where original Ben Franklin stoves kept the rooms warm.    A nice, quick stop right off of the freeway.  After our token photo, 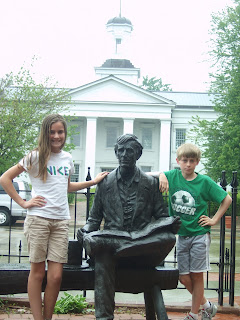 we clamored back into the vehicles for the next leg of the journey.

About 20 miles before the Indiana border we saw a sign for the Lincoln Log Cabin.  No, not a giant cabin made of Lincoln Logs (which we totally would have stopped for, too!),  but a cabin made of logs owned by Abe Lincoln's father.

We took the exit and followed signs WAY off the beaten path for about 15 miles until we came to the Lincoln Log Cabin Park.  It confirmed our strong belief that when possible, you should visit landmarks/attractions at an off time.

Saturday was an extremely off-time.

We were the only people in the entire park.

We began in the visitor's center, where we watched a little intro movie and explored the museum. 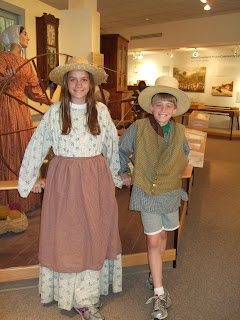 Then we went out to see the grounds.  There were actually two working farms.  On one side, Lincoln's father's farm, where his goal was to simply sustain his family.  On the other, a neighbor's farm, where his goal was to make as much money as he could.  Normally, there are interpreters all over the farms pretending it is the year 1854.  They are working the fields, tending the animals, cooking, making candles, and all else people of the time would do.

The interpreters weren't there, but we were told that we should feel free to look in the windows of the houses.

We wandered around the barn, chatted with the sheep that were in there, and were exploring around the outside of Lincoln's house when the groundskeeper of the park showed up.  He unlocked the house and gave us a mini tour.  He pulled things off of the shelves to show us, let the kids climb up to the loft, hold and work some of the tools, and basically do everything we wouldn't have been allowed to do if the interepreters were there. 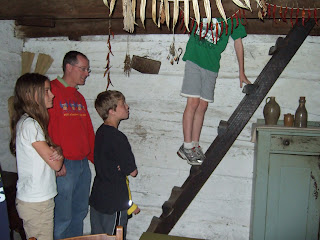 As we left the house, the heaven's opened up and the rain came down.  It poured.  Cats and dogs.  We raced to the barn, but could go no further without getting soaked.  Sure, there should be dry clothes in the van.  But after that willy-nilly, hasty packing, I had no idea where they were or what we could dig out.  So, Hubby took one for the team and ran out to get all of the umbrellas. 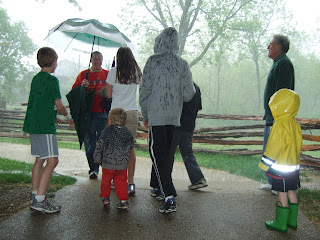 Before we could even get all of the umbrellas up, the rain stopped and the sun came out to say hello. 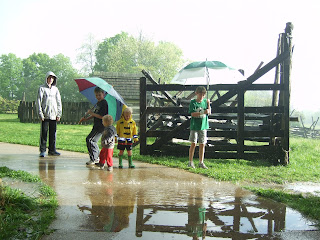 So, we went on around to the other, profitable farm.

Once again, our guide unlocked the house and let us loose in it.  It was a bigger, richer house, with many more rooms and a few amenities, like a much nicer chamber pot.  (Thankfully no one took the opportunity to try that!)

In the yard, the kids found a little frog.  Phoenix, the expert frog catcher, caught it for Turken to hold. 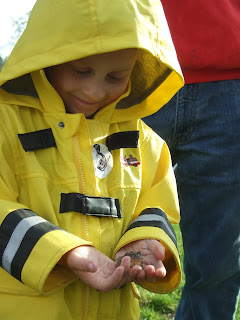 Cuckoo was all about holding it.  In theory.  The moment Phoenix tried to give it to him, though, he hollered and ran. 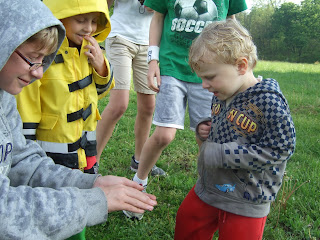 And then, the best part.  The visitor's center lady had told us that a lamb was born just the night before.  Unfortunately, it was locked up in the barn with the mama and out of sight.

Well, when you become BFFs with the groundskeeper, nothing is off limits.  Without a mention of it from us, he opened the gate and motioned us in.  He swung open the barn door, and there they were.  Just two feet in front of us. 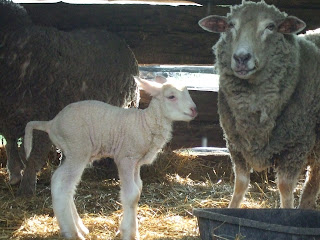 We profusely thanked our guide and headed to the cars.  Stopping long enough for a last family photo, of course. 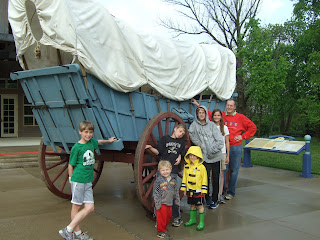 We talked to several families today about what they did after the tournament was cancelled.  Every single family simply headed straight home.  The main reason people had was that it was raining.  Can't do anything in the rain.

Some of the best experiences can be had in the rain. 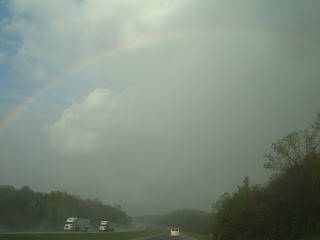 Because with rain, there is so oftentimes a rainbow.

In this case, a complete rainbow.  We could see that rainbow from one end all the way to the other.

I opened the sunroof of the car and had Buttercup reach through with the camera to randomly shoot photos, hoping to get a good one.  In the very bottom, center, you can see our van, heading right under that beautiful arch.

Beautiful day to not play soccer.

Have a lovely, surprisingly fun day!
at 6:49 PM