I Need to Step Up My Game

If my family were on Survivor, my torch would currently be getting extinguished and I'd be taking the walk of shame off the island.

Cuckoo would be winning the million dollars.

I have totally been outwitted and outplayed by my 2 year old.

Since the day he started wearing shoes at the age of 13 months, he has taken them off every time we get into the car.  Every day.  Every time.  Socks too.  If he's in an extra naughty mood, those socks and shoes will be sent flying through the car.

It is to the point that we don't even bother bringing his shoes back into the house.  We just put his shoes on when we get to wherever we are going.  It isn't a perfect strategy.  One shoe was lost when a child was being dropped off somewhere.  A veritable mountain of little socks accumulates in the van.  And if he is going to play outside, we need to run out and get his shoes out of the van, as he only owns one pair of shoes at a time.

Today, I thought I had him.  It was time to get him some new shoes.  As we were heading into the store, we came to an understanding.  He would get to keep his new shoes, only as long as he kept them on in the car.  If he took them off, I would take the shoes, and he would have to wear the old ones.

He was thrilled to find some shoes that had a football, soccer ball, and baseball on each of them.  The size and price were right, so we bought them.  (He did not wear them home, as the security tag needed to be removed by the teller.)

When it was time to get the big kids from school, he raced to put on the new shoes.  He was even more excited to find that the shoes lit up when he walked.  Joy of joys.

I reminded him that he needed to keep the shoes on while we drove to school.  He eagerly agreed.

Thirty seconds into the drive, I started getting jolted by the child sitting right behind me.

"Cuckoo, can you please stop kicking my seat?"

"I'm making my shoes light up!"

The entire 20 minute ride to school.

And we got to celebrate when we got to school that he had kept those shoes on the whole ride.

For the first several minutes of the drive home, the kicking was full-force.  See, he had to show the big kids his new, awesome shoes. 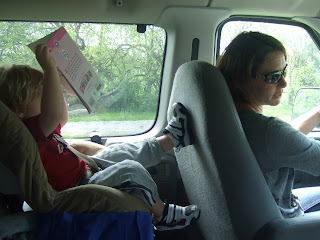 Although it was extremely difficult, I chose to ignore the kicking, believing that he would get tired of it and stop.

And have mercy, I was right.  He did stop.

But I completely underestimated him.

When we got home, this is what I found: 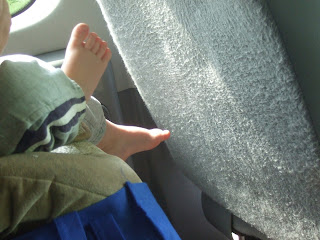 And a look that said, "Don't mess with me.  You know this is better than the kicking." 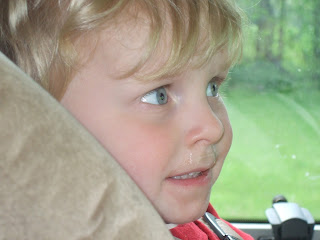