And So I Pray


For a few weeks now, one little boy has been on my mind quite a bit.  I don't know why.  Nothing has happened that I know of to make me wonder.  But there he is.  In my thoughts and prayers.

Almost 20 years ago, when I was student teaching in a third grade classroom, I worked with a troubled little boy.  At the age of eight, he already had a reputation.  No kids wanted to play with him.  No teacher wanted him in her class.  He had spent all but a handful of recesses in the principal's office.  I am the first to admit, he was beyond a handful.

He was put in the room where I was teaching, because the woman I was working under ran a tight ship.  The administration thought it would be good for him to have a lot of structure.

Within the first week, he was into all sorts of trouble.  Spitting on kids, yelling at adults, throwing things across the room, refusing to do any work.  It was a bad situation.

I noticed that one of the big places for trouble was walking in the halls.  Anytime we would walk to the restrooms or lunch or specials, he would start something with the kids around him.

So I made a new rule.  Anytime he left the room, he had to hold my hand.

At first, he fought it, and he fought it hard.  Crying, pulling away, refusing to do it.  I would just hold his wrist and walk with him.  I'd talk to him and ask questions, whether he responded or not. (I'm guessing that these days, I wouldn't have been allowed to do such a thing.)

He started asking to hold my hand, and we became friends.

Something drastic happened.  I saw it, but I wasn't sure others did until another third grader came to me and asked what had happened to this little boy.  She said that he doesn't hit or spit anymore, that he is actually fun on the playground, and he is a nice boy.  I almost cried when she said this.  I certainly let him know that people were liking the change.

Parent-teacher conference time came around.  Just before his conference, I found out that the male teacher in the building was going to be sitting in the hall outside of our room, listening in case we needed help.  I found out that this boy's mom had a boyfriend, which the little boy called "Dad".  A boyfriend that beat her, had spent time in jail, and had been known to be quite aggressive and intimidating at past conferences.

Not ideal, but I wasn't worried.  For the first time in this boy's life, his teachers were going to be singing his praises.  Not only was he doing his work, but he was taking pride in doing it well.  As I expected, his mom was thrilled, and the boyfriend behaved himself.

One day the boy came in to school and was back to his old self.  By 10:00 he had hit and spit on 4 kids and was downright defiant with the teacher and me.

After the fourth attack on a child, I pulled him into an empty room and asked him what was going on.  After a minute of telling me, "Nothing," he broke down into horrible sobs.  He couldn't talk for a good long time.  He just cried and cried.  All I could do was hug him and clean the snot of his face.  Finally he managed to tell me.  His dad was missing.  Something about a fight, police and the hospital were involved.  I found out later that his mom's boyfriend wasn't missing, but was in jail.

After our talk he was better, and a few days later he happily reported that Dad was back home.  He was back to being friendly and hard-working.
When the semester ended, so did my time in that classroom.

It physically hurt to have to leave that little boy.  I knew that once I left, things were going to go downhill.  The teacher I worked with, while being a good person, just didn't see that he needed love and positive attention, not structure.

I came back to visit the kids several times.  The last time I was there, this boy had been moved to the classroom with the male teacher.  He was back to his old ways.

I wonder what has become of him.  I still wonder if there is any way I could have done more.  I wonder why in the world I was put there to help him, when I was just going to be leaving after three months.  I became just another person to abandon him and let him down.

But I never forgot him, and I never forgot what I learned from him.  And I applied it to all other children that I taught over the years.  In every classroom, there is at least one child that needs something different.  Something outside of the box.  I did my best to help those kids.

But then I started my own family and gave up my (paid) teaching career.  And I'll never go back.  Not because I didn't love my job, but because I could never be a good mom and a good teacher at the same time.  I know my limits.

However, that doesn't mean I won't be of some use to children like that little boy from that third grade classroom.

Watching my children grow makes me so very sad.  As I write this, I am listening to Turken and Cuckoo chatting in their beds.  Quietly, until someone gets excited and blurts out, "THAT'S how you count" or some other such declaration.  There is no sound in this world that I love more than the squeaky, high-pitched talk of a toddler.

But their growing also means I'm getting closer to being in a classroom again.  And I'm so excited for it.

I'm not going to spend much time in my kids' school.  They have fabulous teachers and very involved parents.  No, I'm going to get into those rooms that really need help.  With fabulous teachers that have little boys and girls with needs that can't be written into an IEP, but not enough time or resources to help them all.

Two days ago, when I actually started writing this post, Buttercup told me that she got Bermuda for her country report.  I can't tell you how excited I am that she will be writing about the place where Hubby and I spent our first year of marriage.  I immediately started digging in our "Really Old Photos That I Will Organize Some Day in the Far Distant Future," and one of the first pictures that got pulled out was this one: 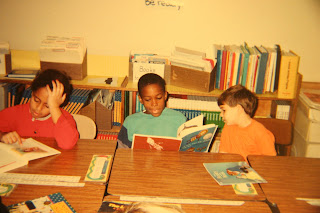 That's him there in the middle.  Reading with a classmate.  Happy and friendly and engaged.  I didn't even know I had this picture.  And I teared up when I saw it.

I don't know why he has been on my mind lately.  All I know is that I need to pray for him.

Oh I pray that I get to see him in heaven someday.