People who live the most fulfilling lives are the ones who are always rejoicing at what they have.
-- Richard Carlson

1.  I am thankful for the patience all of the poets who entered my "Ode to the Pigs" contest.  Over a week ago, I put a call out for readers to write their own poems to bid our pigs a fond farewell.  The readers delivered in a big way. I loved them all.  Finally, after all this time, the kids have voted.  It was a close race.  The first (anonymous) vote ended in a 5-way tie.  (Cuckoo abstained.)  I then asked the kids to vote for their second favorite and added the two scores of both votes together.  A clear winner was revealed.  (All but one child voted for it.)

(A little note:  My kids have had extensive training in poetry at school.  They've written poems, read poems, and studied poems. And yet.  You are going to keel over when you see which one they've chosen.)

Roses are red,
Violets are purple,
I like pancakes with maple syrple
...and a side of bacon...


It was the syrple that put her over the edge and into the winner's circle.

Kari, you have won yourself a prize!!!  Email your address to me, and I will get that prize to your door!

2.  I am thankful for pretty weeds.  I want to know who decided what is a weed and what is a flower, because I am enjoying these lovely little bits of sunshine in a season where mums are the only sanctioned flower. 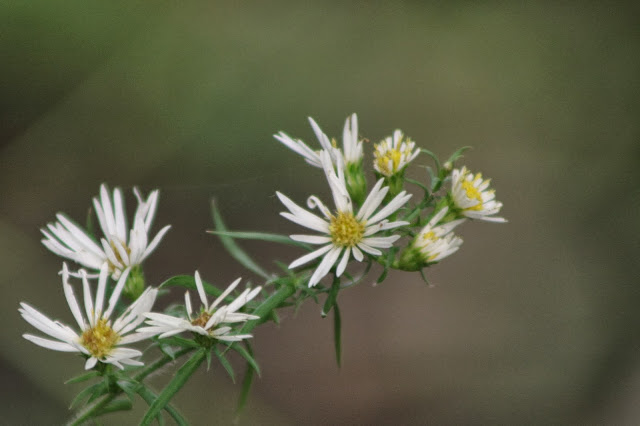 3.  I am thankful for Cuckoo's reasons for eating a variety of foods.  That boy used to be one picky, picky eater.  We did the same with him as we've done (and still do) with the other kids, which is simply offer them food.  If they eat it, good.  If not, they get nothing else to eat.  Cuckoo didn't eat many full dinners for a while there.  And then he turned two.  After his second birthday, he announced, "Big kids eat salad.  I'm a big kid, so I will eat salad, too."  He ate an entire bowl of lettuce, no dressing, and has been eating salad ever since.  Last week we had stew for dinner.  Most of the kids were not exactly enthused about eating it.  Cuckoo ate every bite we gave him.  When I was discussing the lack of enthusiasm with the big kids, he piped up, "I want to be a dad, not a mom, when I grow up, so I ate all my food.  I need to be big to be a dad, not a mom, so I need to eat it all."

The big kids have been banned from telling him of the impossibility of becoming a mom.  If it's going to get him to eat, by golly, he will be left in the dark.

4.  I am thankful for a good week with Phoenix.  It's been a rough road with our oldest this school year.  We made some changes, he took more responsibility, and we have had a pleasant week.  Thank the Lord.  Honestly.  Thank Him.  I have each and every day this week.

5.  I am thankful for crayons and coloring books.  Cuckoo and Turken love, love, love to color and draw.  Lately, even more than usual.  Each day this week, Turken spent hours on activity pages and picture drawing and picture coloring-in.  I'm very happy to see it.  Sure, their marathon coloring allows many hours of quiet time for me, but it is so very good for their fine motor skills and their little brains when they do such activities.

6.  I am thankful for the mudroom table.   That's where the coloring takes place.  Before the remodel, my kitchen, not a mudroom, looked like this:


7.  I am thankful for a night at home.  For the first time in a loooooong time, we had a night in which the entire family was home together.  We played games.  We had a real, big dinner.  We tidied up the house a bit.  We played more games.  We laughed and enjoyed the relaxing evening.  One more month...Soccer will be over in one more month.  There will be many more of these in one. more. month.

8.  I am thankful for my parents' good health.  I have several friends who have either lost a parent or are in the midst of helping their parents through a terrible illness.  My mom has beaten death three separate times (a mysterious kidney ailment when I was a teen, a complete blockage to her heart two years ago, and just a few months later, a fight against cervical cancer), and I thank God every single day to still have her here with us.  My dad was a policeman for 30 years, and in that time was shot at more than once.  His health, though, has always been good.  I don't even want to contemplate the day that this will no longer be the case.

9.  I am thankful for my new web/button designer.   I don't know if you've noticed, but I have two new social media buttons on my sidebar.  I did not make them.  Buttercup did.  Her good friend has started a fashion blog, and Buttercup is her photographer.  One day, when I went to pick Buttercup up from the friend's house, they drug me in to see what Buttercup had done on the blog.  I was shocked.  The girl taught herself how to make all sorts of things, and she has skills!  (Click on the link to see her work.  The friend's mom won't allow head shots, so Buttercup has been quite creative in her photography.) I immediately commissioned her to make some buttons for me.  Stay tuned.  As time allows, she'll be adding and changing all sorts of things for me.

10.  I am thankful for the fact that one of our chickens did not get eaten.  Buttercup went outside to feed the chickens the other day, but soon after came in with the command, "Mom!  I need you outside RIGHT NOW!"

I sauntered on out (Didn't want her to think she could order me around, but I was quite curious to see what the hubbub was about.) to see what was going on.

For those who are having pig story withdrawals, an illustration:

"How," you might ask, "did a chicken get on the roof in the first place?"

I would reply, "Very good question!"

The rest of the story...

By the time I got outside, Buttercup had already shooed it into the old chicken area where the dogs couldn't get to it.  All we had left to do was get the chicken into the impenetrable redneck fence we had built for the darling hens last month, which had since been reinforced with more netting.

Well, I took one side of the fence off the nails securing it to the coop wall, giving the chicken a way into the pen to be with her friends.  Instead of simply walking through, she flew.  Right onto the netting.

All I could do was stand there with my jaw on the ground as this chicken stood there bouncing on the net.  To her, this net was not a barrier to her escape, but instead a fantastically fun trampoline launching pad to freedom. 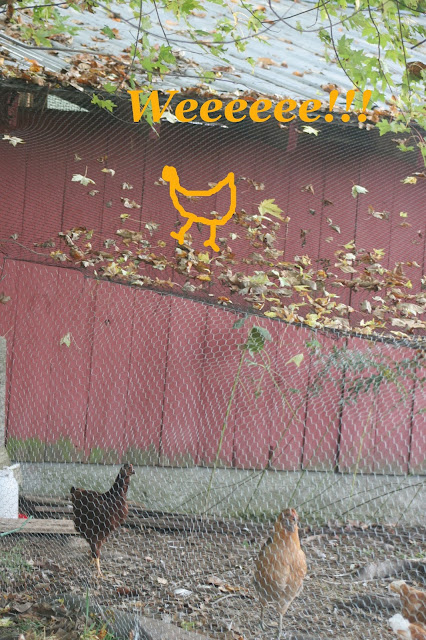 That blasted bird hopped right on up to the roof again as I stood there and watched.

I snapped out of it and started my first attempt at climbing the spindly little tree to get on the roof with her.  Fortunately, she saw me, had pity on the poor woman who couldn't even haul her left leg up off the ground, and found her way back into the pen.

Yesterday, when I went out to feed them, I heard some scratching overhead.  Sure enough, that same hen was on the roof again.  By the time I got around, she was back to bouncing on the trampoline.  I waved her over towards the holes in the net, and through it she did plop. 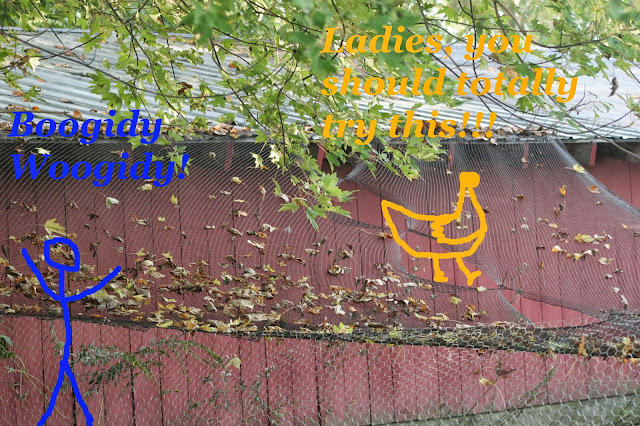 Completely secure in the fact that she was the superior creature in this little song and dance.

I am grateful that she has only done this while we are at home so far.  I am hoping and praying she doesn't hop off the roof and right into the jaws of death (aka Roy's mouth) one of these times.

And now it's your turn.  For what are you rejoicing this week?

Your hosts
A Fly on our (Chicken Coop) Wall, Considerings, Finding Ninee, Getting Literal, I can say mama, I Want Backsies, Rewritten, Steps into Parenthood, Thankful Me, The Wakefield Doctrine

Email ThisBlogThis!Share to TwitterShare to FacebookShare to Pinterest
Labels: 10 things of thankful, the farm, the kids