watched our dog give birth in the front yard.

When we adopted our dog, (a stray which had shown up at our friends' house) the vet said she couldn't tell if the dog had been fixed or not.  We never saw any indication of the dog going into heat, so we assumed she was fixed.

(You aren't surprised in the least, are you?)

Four years after adopting her, on October 29th, 2008, I noticed that Brownie seemed to look a little thick around the middle.  I just kept an eye on her to see if she would get bigger.

Two days later, on Halloween morning, Brownie didn't come when I called her.

After a bit of searching, I finally found dear Brownie in the big barn.

My mouth dropped farther open and my language got worse as I counted.

How in the name of all that is good did my dog give birth to EIGHT puppies?  And on an unrelated side note, how did I not notice she was pregnant until two days before she delivered EIGHT puppies?!?!

I brought Brownie some food and water and left her to care for her babies.

A little while later, I saw Brownie out in the yard.  She was squatting, and I thought, "Huh.  I certainly couldn't go to the bathroom that soon after delivering one baby.  How's she doing that after delivering eight?"

And then I saw her turn around and pick up the "poo" she had just deposited onto the yard. 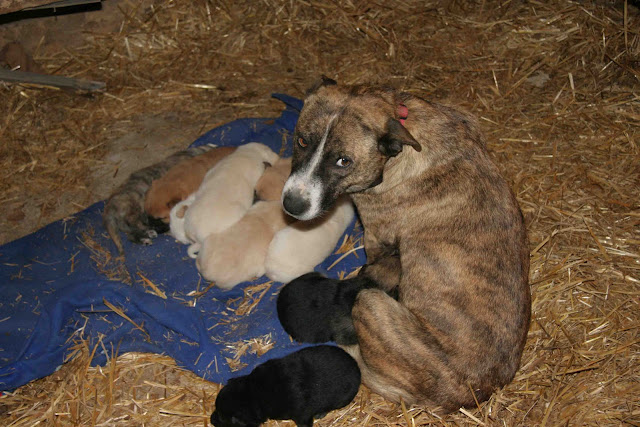 Only at my house could a dog deliver NINE puppies.

Brownie was a good mom and took fabulous care of her ridiculously large brood.

Thankfully, from the beginning, she let us hold and play with the puppies.  The kids were in heaven.


In the end, we found homes for 6 of the puppies.  One disappeared at 4 weeks of age, we thought because it was taken by a hawk or other wild animal.  Two years later, we found out that lost puppy had actually shown up on the doorstep of a house half a mile away.  The family ended up keeping him.

To find out what happened to Brownie and the two remaining puppies, you must read one of my first posts.  You will not be disappointed.  It is horrifying at first, but ends up so funny I cry every time I tell it.  (Being one of my first posts, it isn't written all that well.  Sorry about that.)

We still have one of those puppies.  Her name is Hershey, and she is as wonderful a dog as you could ever hope for.  Every year, at some point during our race to get everyone home from school, homework done, fed, dressed up, trick-or-treated, candied up, and into bed, we remember, "Oh yeah, it's Hershey's birthday today," and give her an extra pat on the head.

To see how other folks finished the sentence this week or to link up your own Halloween story, head on over to any of the following ladies' sites:

Email ThisBlogThis!Share to TwitterShare to FacebookShare to Pinterest
Labels: FTSF, the farm