I have a favor to ask all of you.

Please, please post more.  A constant stream of posts would be extremely helpful.

See, I'm trying very hard to live in a state of denial, but it's hard, when I can't live vicariously through you all.

We have what can only be called a situohmylandswhosaidweshouldraisepigsation.

We noticed on Tuesday, because we aren't quick, that one of the pigs was looking quite skinny and wasn't eating.  I googled, "why won't my pig eat?" and got an eyeful of horrible options.

I went out to the pen to make darn sure the pig was sick.  Yep, sick.  Getting worse by the minute.

I called my sister-in-law, who is a trained vet tech.  (The one with the lambs.)

Me:  My pig is sick.  I know there are a couple of possible reasons.  My thought is to treat them for the one, as it won't do it any harm, because the other will kill him no matter what I do.

Me:  You're going to tell me I need to give this pig a shot, aren't you?  You realize I've never given anyone or anything a shot before.  I'm not really a farmer.

SIL:  One of you will need to sit on the pig to hold it down.  The one giving the shot should sit on its head.

SIL:  Because you eat the pigs, you have to put the shot in a place where you won't be eating the meat, which is in his neck.  Below the ear, between his jowl and shoulder.

Me:  You have got to be kidding me.

SIL:  No, I'm not.  The pig will struggle, and when you stick it, he will really start kicking.  That's why I had you buy extra needles.  Since this is your first time, you will probably break a few off.

SIL:  Good luck.  Keep me posted.  I fully expect a blog post with pictures at the end of this.

I then called my mom.

Me:  I have to give a pig a shot in the neck.  Sitting on the pig will be important.

Me:  Oh, and I will probably have to do it multiple times, seeing as how when he flails around, I will break needles.  I can't get the image of an acupunctured pig running around the pen out of my head.

Mom: Hahahahahha! (snort)  (breathless) Stop.  I'm sorry.  Picturing this whole thing and the many ways it could go makes me laugh.  It's sad.  Poor pig.  But, hahahahahahaha!

So, when the Hubs got home, we headed to the pen.  The biggest problem was getting the other pigs to stay away from us.  Every time I knelt down next to the sick one, they were all over me. 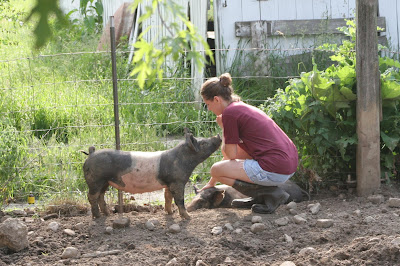 Hubby thought he could help by holding them off. 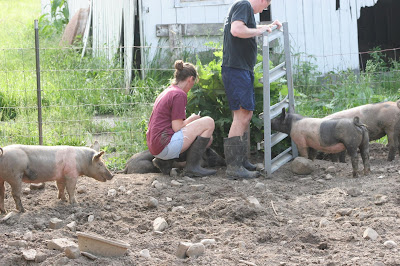 Besides the fact that he couldn't possible keep 3 pigs away, and he kept scaring the sick one, who would then get up and move, I couldn't very well sit on it's body and head at the same time.

We spent 5 minutes getting the pigs shut up in the barn.  With me.  Which means Hubby had to move the "extra precautions" in order to get me out of the barn.

THEN we were ready to take care of the sick pig.

Honestly, all that activity had worn the poor thing out.  No sitting on the pig was required.  Hubby held him, just in case, but I gave it the shot without a flinch from the pig.

If the meds were going to work, they would do so within 24 hours.

I went to bed fully expecting to have to dispose of a dead pig, and thoughts of the other pigs in my head.

Have the other's been eating?

Are they seeming a bit less peppy?

Did that one urinate or was it diarrhea?  (no joke.  I caught the sight out of the corner of my eye when with the sick pig.)

Have a better day than me!