Long, Little Takes With a Dollup of Big Announcement

Doing the FTSF and Quick Takes mash up today.

This summer I plan to...

enjoy the time with the kids as much as possible.  We will give a half-hearted attempt at keeping the yard/garden from looking like an abandoned property.

In less than three weeks, my oldest will officially be a high schooler.  Let's put that into perspective, shall we?  I only have four (FOUR!) more summers in which he is required to live with me.  And those summers won't be lazy.  High school soccer practice starts in June. (We normally have a nice, long break from sports in the summer.)  This summer he will be spending 10 days at Boy Scout Jamboree and a week at regular Scout Camp.  Not eventually enough he will be of an age which includes driving and getting a job, thus taking even more time from our usual laziness.

My internal "fun with my son" clock is a tickin'.

And next year, Buttercup will start high school.

And the year after that, Star begins high school.

And the year after that, Giant will be joining them.

There are some major perks to having children close together.  This is not one of them.

Lupus (or whatever the heck this blasted affliction is) is getting on my nerves.  It seems Lupus doesn't like mowing the lawn.  Each time I do, Lupus makes me pay in the form of exhaustion and pain.  For at least two days.  It's cramping my style.  It doesn't help that I've been relishing the warm sun for the last few days.  Sun makes it worse, so I should be under an umbrella at all of those soccer games.  I just don't these first days of spring.  I want to feel the warm sun.

I came across a very good summation of how it feels to have a condition like this.  Many people have asked me what it feels like, and if you want to know, go here.  Keep in mind that my Lupus is not as bad as hers.  I have never had a day in which I can't get out of bed.  I am not on medicine for it, except for the aspirin to fight blood clots.  However, this very well explains my days.  She calls it the Spoon Theory.

Since I brought up the yard in each take already, let's keep going with it.

I spent an hour and a half on the Dixie Chopper last night.  It was less a mowing of the grass and more a spreading of the dandelion seeds. 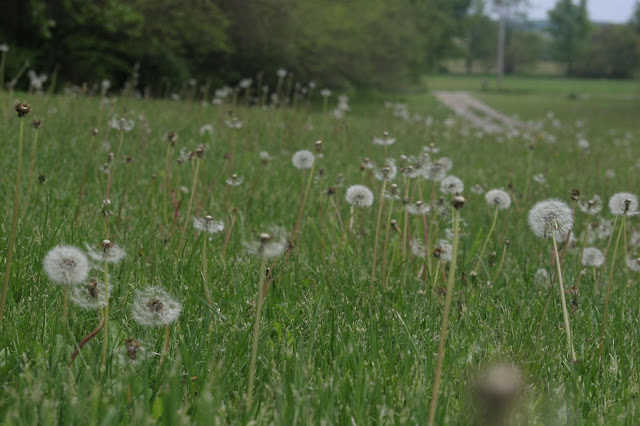 The south side of Indianapolis is under siege.  Dandelions are everywhere!!!  Before you (Dad) say that it is just our lack of lawn care causing the dandelion problem, I will tell you no one is immune!  Even people who take care of their lawns are having trouble.  One corn field nearby is not full of corn, but instead a sea of dandelion puffs.  Standing outside, you can see the seeds floating in the air, almost like a small snow flurry.  Never seen anything like it.

I'm guessing it is a direct result of the drought last summer and the non-stop rain this spring.  Lots of grass dying + weeds that would survive nuclear attack + plenty of water = lots and lots of dandelions.

Fortunately for the DNR (Dept. of Natural Resources in Indianaspeak) I am on it.  We just need more of these birds. 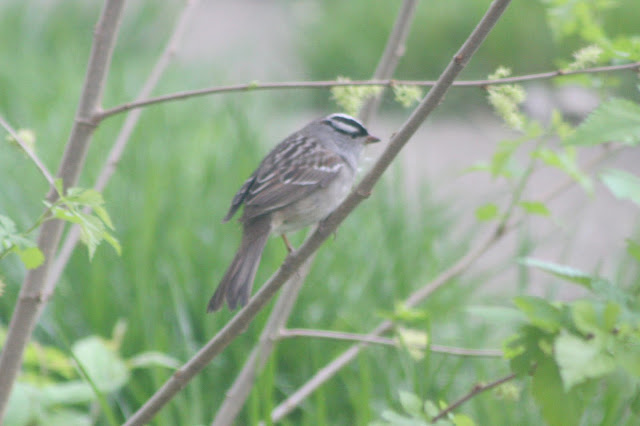 Isn't it cute?  I have no clue what kind of bird it is (anyone?  anyone?), but I actually saw it pluck seeds off one of our dandelion puffs and eat them.  I had no idea there were creatures that ate dandelion seeds!

Sure, this bird isn't like a bat, which eats millions of mosquitoes in its lifetime.  It didn't even eat half of the dandelion before it flew off, but eat them it did.  We will need lots and lots of them to solve this here dandelion problem.  Which may lead to an overabundance of birds, which I wouldn't mind, unless they're like the birds that keep nesting in the eaves of our house and pooping all over my porch and windowsills.  I don't like that.  So I guess we just need to make sure these are the kinds of birds that eat dandelions and build nests in trees as birds are meant to do before we go whole hog on the bird idea.

Oh, and we need to make sure all of those birds won't sit in trees and stare at me every time I leave the house.  I will have horrible flashbacks to Alfred Hitchcock days and be unable to leave my house and will have to seal up all chimneys, windows, and doors for fear the birds will go bonkers and attack my family and me.  Mostly I'm worried about me.

I was attacked at Epcot last year by one bird, and that wasn't any fun.  Pretty embarrassing actually.  Can't imagine I'd handle an attack by a hundred little birds very well.

Perhaps the birds are a bad idea.  Maybe we should simply embrace the dandelion.  They can be quite pretty, no?

I shall give you one guess as to what is the most exciting event in a five year old's life.

I know, I would have said kindergarten, too.  Up until today we would have been right.

Today Turken received his first, real, handwritten, delivered by his teacher, invitation to a birthday party.  And not just any birthday party, but an indoor swim park birthday party with his classmates.

The boy has lost his mind.

We read it multiple times.  We dissected the "cover art"/picture of Sonic the Hedgehog.  We discussed what a water park actually was.

He wouldn't stop carrying the invite around the house, so I told him to leave it on the counter so I would remember to talk to Dad about it (getting him to the party will take some serious planning, seeing as how it is President's Cup/State Cup weekend when the kids have tournaments all over the flippin' state)and then put it on the calendar.

After getting over the horror of the thought I might forget, he left the room.  A few seconds later he came back with a pen and the calendar.

After he oversaw the marking of the calendar, we counted.  Ten days until the party.

I have taken on the role of Volunteer Coordinator for the soccer club.  It sounds like a big job, but really it is a piece of cake.  (For anyone in charge of scheduling volunteers/meals/any other sign up, I can't speak highly enough of the site signupgenius.com.  The best invention ever.)

Anyway, I had to set up a Google account for it.

Since then I have tried to comment on a couple of blogs to which I have commented in the past.  Problem is, it won't let me comment except with a google+ account with my full name and other various things not necessary for anyone except my volunteers to know.

Today dawned bright and clear.  A gorgeous day to hang some clothes on the line to dry.  So I did.  Two loads in fact.

At 2:00, the little ones and I left to get the big kids from school.

We noticed in the distance some ugly looking clouds.

And then we saw those tell-tale streaks coming from the far-off clouds which tells you it is raining over there.

It was at that point my marbles hit the van floor.

I was a basket case, worried the rain would get to our house before I did.

All told, it takes almost an hour to get the kids and get home.  Each passing minute brought those rain clouds closer and closer.

The kids got in the car, and we tore off towards home, me fretting the entire way.

The kids, in their completely annoying way, asked, "Why are you so worried about the clothes getting wet?  We do have a dryer."

Ack.  Do these children not know me at all???

We have three recycle bins (paper, cardboard, and plastic/glass) and a compost bucket they have to empty into the huge compost pile.  I make them rake grass to put between the rows of our organic garden.  We raise organic pigs and chickens, which the kids feed and water.  Surely they have got to know by now that I am obsessed with being eco-friendly!

The thought of putting clothes which had been dry, but then got wet because I got busy and didn't take the dry clothes in when I should have, into the dryer makes my head spin.

At mile 4 from school, I could see the wet road half a mile ahead.  The kids heard me groan.

At mile 5, we were in a downpour.   The kids couldn't hear my tears over the rain.

At mile 7, the rain stopped.  The kids heard me give a hopeful yelp.

At mile 9, there were still puddles all over the road.  The kids tried to distract me.

At home, the clothes were a bit wet.

I left them outside.

And watched the sky closer than any storm chaser ever would.

At precisely 45 seconds before the next rain hit, I ran out and collected the clothes.

Half of them had to finish drying on the drying (fuseball table) rack.

No electricity was used in the drying of the clothes.

And with those two loads...

I have a huge announcement.  For the first time in the history of my children, every single sock, pair of underwear, pair of shorts, pants, shirt, and uniform is washed and dried.

I HAVE CAUGHT UP WITH THE LAUNDRY!!!!

Even the sheets have been washed in the not so distant past.

And thanks to the fact that the season premier of Wipeout was on tonight, I was able to get the big kids to fold six loads without any complaints.

After all the clothes were folded and put away, the kids headed up to bed.

Within seconds, a big kid came back down.

There, standing before me, was Giant.  He was finishing up his packing for Scout camp this weekend.

Do you know what he had the nerve to say to me?

"I don't have any Scout socks."

It took everything I had to keep from knocking his head off of his shoulders.

And with that, I bid you a fine farewell.