The Tale of a Different Sort of Ugly Duckling

Normally, I am not one to blame my parents for my flaws.  I don't think anyone should.  All parents make mistakes.  The vast majority did the best they could.  At some point, we all need to grow up.  To thank our parents for having us, raising us, and doing their best.  We need to forgive them for the mistakes they made, learn from them, and move on.

However, while organizing photos yesterday, I discovered that there are two things about which I must point a big ol' accusatory finger at my mom and dad.  These weren't mistakes. One of them was very likely willful.

It all started with my mom. 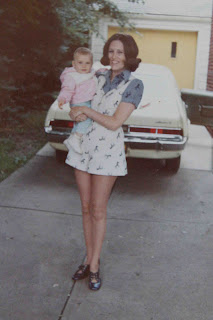 From what I'm told, for 1972, she was quite hip.  Recently, I found out that she and my dad actually owned a disco bar for a couple of years when I was young.  Certainly only hip folks did things like own discos.

I have no problem with her putting me in equally short dresses when I was a toddler.  With bloomers, it's just a good look for any two year old girl. 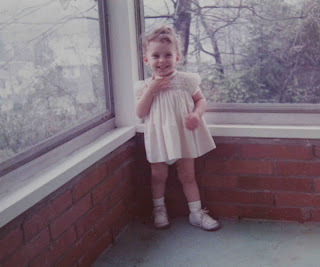 But at some point, a mother should really just stop putting her daughter in short dresses.  Little kids run, play, and swing.  Dresses just aren't practical. 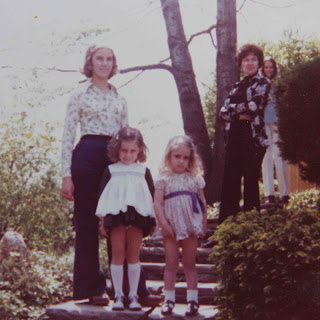 I'm the one on the left, whose underwear is actually showing.  Why my aunt and grandma, also in the photo, didn't stop my mom I'll never know.

Even my first day of kindergarten, she couldn't bring herself to dress me appropriately. 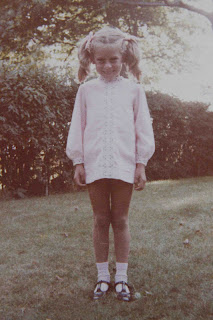 I vividly remember one day in kindergarten.   We were having our indoor recess time, and I was crawling all around with the other kids.  Out of the blue, a little boy yelled, "I can see your underwear!"  I was mortified.  And that is the day I started to rebel.

Oh, the fights my mom and I got into over dresses.  I refused to wear them, and she continued to want to make me.

The only time I didn't fight her was the day of my First Holy Communion.  I knew a dress was required attire, and at least this time she bought one that came close to finger-tip length. 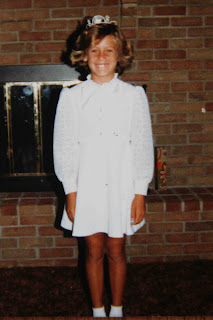 In fourth grade, she thought she was going to finally win.  It was picture day at school, and she had a dress she wanted me to wear.  I, of course, refused.  Big fight ensued, until she brought out the most hideous of pant suits.  She said I could either wear the dress or the pant suit.  I am nothing if not stubborn, so I chose the pant suit. 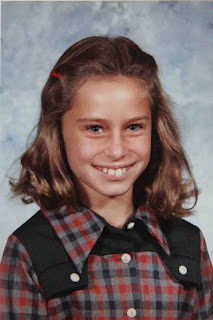 The pants were the same horrid plaid.  Yessirree, I showed her who was boss.

Every year, the FOP held a Christmas party for all policemen and their families.  Santa would show up, and each and every child would get to sit on his lap and receive a gift.  Normally a very nice, age and gender appropriate gift.

Once again, my mom insisted I wear a dress.  And this one was a doozy.  I put up the biggest stink ever, but she wouldn't back down.  This is when having divorced parents came in handy.  I put the dress on, but stuck a pant suit in my bag to take with me.  I knew my dad wouldn't care if I wore a dress or not, as long as I was dressed appropriately.  Being that my mom always made me choose between a dress or a pantsuit, I figured the pantsuit would be fine.

I wore the dress for a photo or two, so my mom would know that I wore it. 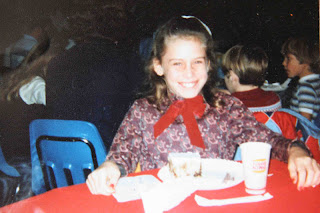 And then, before the Santa thing, I changed into my pantsuit. 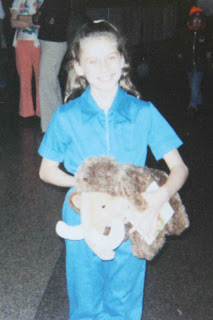 Remember I said "normally" had good gifts?  For some reason, this year they ran out of the right gifts, and I got stuck with a stuffed mastodon.  Or maybe they didn't run out.  They just assumed that a girl who wore a mechanic's outfit didn't want the girl gift they had waiting for her.

Now, I can't just blame my mom on my lack of fashion sense.  My dad contributed in his own way.  As we got older, he would buy each of us a sweatshirt for Christmas.  My brothers always got funny ones, my sister always got a name-brand, fashionable one, and I always got the ugly one.  One year it was a colorful, psychedelic looking cat sweatshirt with matching cat earrings.  The favorite, though, that still gets discussed to this day, is the dandelion sweatshirt.  As a senior in high school, I received a sweatshirt that had a dandelion on it that had gone to seed.  The seeds, as if a child had picked it and blown them into the wind, went across the top, onto my shoulder, and down one sleeve.  It was awful, but he thought it was beautiful.  To this day, he insists that it was.  (See where I get my stubborn from?)  Unfortunately, I don't have a photo of it in order to put it to a vote.

I swear, I became the joke.  I believe that people would buy clothes for me, and bets would be placed to see if I would wear it.  The things just got uglier and uglier.  But because I was a good kid, who was never able to get a sense of what was pretty and what was not, I trusted the gift-giver.  I wore everything.  (Although I only wore the dandelion sweatshirt under bigger sweatshirts when I had track practice in the snow.)  I mean, really, this had to be a joke, right? 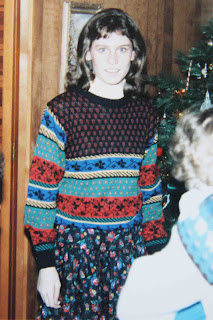 And now, for the second thing I blame on my parents.  My hair.  I have awesome hair.  Thick and curly, but not too curly.  Unfortunately, I never knew how great it was.  I hated my hair.

It started with my grandma.  She was a hairdresser her entire adult life.  Naturally, my parents had her cut our hair.  I am fine with that, up to a point.  When you are going outside the box for a different haircut, she was not the best choice.  Children were not her target market.  She did the hair of the ladies in the neighborhood, who would sit under the drier and chat with her.  For a while there, Grandma actually worked at a morgue, doing the hair of the dead.  Let's just say, she wasn't having to keep up with new and fashionable hair trends.  So one day when I was in second grade, my parents dropped me off at her house for a haircut.  I guess I told her that I wanted a short 'do, so she obliged.  And then threw a perm in to go with it. 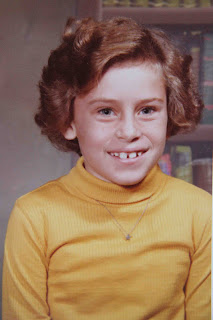 Oh, the insanity of it all.  And my, that took a good long time to grow out.

Finally, though, it did grow, and I desperately wanted a Dorothy Hamill.  I loved watching her skate, I thought she was glamorous, and for the first time in my life, I had an idea of what I wanted.  I even talked my mom into taking me to a salon to get it done, as I knew my grandma, who would surely do her best, had no idea how to cut a Dorothy Hamill.

My mom and I headed to the salon in the mall, where she left me in the hands of the stylist.  I really wish she would have stuck closer.  I don't know if the woman didn't know who Dorothy Hamill was, or if she didn't care, or if my sister had snuck her a $5 bill to get back at me.  I walked out not with a Dorothy Hamill, but a mullet.  As one of my children said when he saw it, "You looked like a dude."


He was only saying what everyone else back then was thinking.

We thought the perm in second grade was hard to grow out.  This little mishap was so much worse. 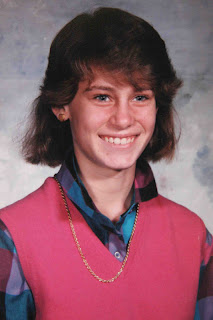 Years and years of bad photos, patiently waiting for it to grow long enough that I could fix it. 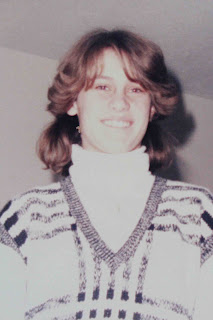 (And have you noticed the lovely attire in these mullet photos?  I was still in the "wear whatever other people buy me" phase.)

And while I'm ripping on my parents, I might as well tell you about the worst Halloween ever. My sister, who never endured these indignities, because she always wore the dresses my mom got for her, was a princess. A lovely princess. I, on the other hand, was a bum. My mom had seen an idea in a magazine that she thought was just the cutest idea ever, so I got to be the guinea pig. Not my brothers, who you would think would be the logical choice. No, it was me. She dressed me up in normal bum attire (How un-PC we all were back then.) but added a beard. The beard entailed putting Karo syrup and coffee grounds on my face. All over my chin, lips, and jaw. Oh, it was terrible. It stunk, and it itched, and it tasted foul.  I so wished I had the picture to show you, but I think my mom destroyed it.  Once we got to the point of having to get the beard off of my face, she actually felt bad.  She got rid of the photographic evidence, hoping I would forget about it.

My ex-sister-in-law once commented while looking through family photo albums, "Good grief, no wonder you didn't date until you were 16."

And when I finally did meet the guy with home I went on my first date, we were at swim team practice.  I was wearing a bathing suit and a swim cap.  He had no idea what kind of hot mess he was looking at.  By the time he saw me in all my big-haired, oddly-attired glory, it was too late.  He had already asked me out.

Luckily, his mom didn't teach him much about fashion either. 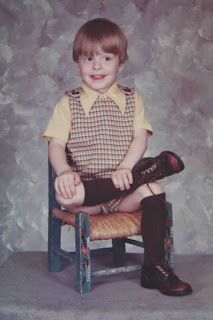 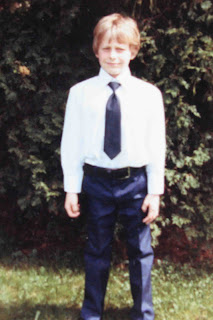 That first date turned into a lifetime together.

And we are perfect for each other.