I have finally recovered from the pig incident, and can finish my story about Phoenix's birth.  If you missed it, as it was posted on the morning before I found the pig, go here.

The pregnancy was a normal, healthy experience, but our lives were not.  In a span of two months, I quit my job,  Hubby graduated from law school and took the bar exam, we moved to a new city, and Hubby started his new job.  I was 8 months pregnant when we moved.  I had to find a new doctor, and we didn't know a single person in our new city.  The closest family member was 2 hours away.  And yet, I have to say, we came through it quite well.  At least until the baby came along.

Exactly three weeks before my due date, I got up for my usual 4:00am bathroom break.  Before I could get there, my water broke.  Big time.  All over the bathroom floor.  I just stood there for a moment, in complete shock.  This was my first baby.  First babies are NOT supposed to come three weeks early.  We hadn't packed.  We didn't have our phone list ready.  I had only met my doctor twice, for crying out loud!

But, it was very clearly happening that day, whether we were ready or not.

I had to wake Hubby.  His behavior at this point proved to be a big clue as to the amount of help I would receive throughout the years when children wake up at night.  Basically, he is of no help whatsoever.

It took me a good, long time to even wake him up.  And once I did manage to get him to open his eyes, he was completely disoriented.  He couldn't focus, and had no idea what to do.  He just kept asking, "Can I take a shower?"

In order to get him calm, I gave him a packing list and told him to get everything on it.  In hindsight, I should have just let him sleep and done everything myself.

While I was on the phone with the doctor, he managed to pack:

- six pairs of underwear for me (totally not on the list.  I was pretty sure I wouldn't be wearing underwear for at least half of my hospital stay.)

- a pair of socks and a sweatshirt for him (The only thing he remembered from our prenatal classes was that the delivery rooms are usually kept chilly for the delivering mothers.)

- a tennis ball (it was on the list from the What to Expect book, in case I had back labor.)

What he failed to pack:

- any underwear for himself

Also in hindsight, I would have eaten something before we left.  I got to the hospital, and they asked what and when I had last eaten.  That would be some fancy salad and some sort of fancy steak, as we had been at a fundraising dinner the night before.  Did you catch that it was fancy?  That is a word that means "small".  I didn't eat much at all the night before.  And here I was, at 5:30am, with nurses who would not let me eat a bite of food until after this baby was born.  Considering I had yet to have a single contraction, it was likely going to be quite some time before that happened.

At around ten, I still had no contractions, so I was put on Pitocin, aka the worst drug ever invented.  Let's just say, the contractions started something fierce, and I was crying and begging for an epidural.  Hubby didn't know what to do with me.  All he had to work with was a tennis ball and some socks.  Not exactly what I needed.

Finally, at some point, the epidural man came.   Much to Hubby's delight, they kicked him out of the room.  He took the opportunity to eat.  Selfish bugger.

The epidural was fantastic, and I was able to relax until around 3:30.  That's when the nurse checked me and said it was time to push.   "How 'bout that?" I thought.  I had no idea, as I couldn't feel a darn thing.

With each contraction, I could feel a little tightening.  No pain, but I knew when the contraction was coming.  Hubby was on my left, the nurse was on my right.  After one hour, I was completely exhausted.  I was actually falling asleep for the minute or two between contractions.  I clearly remember waking up to yet another contraction and noticing that Hubby and the nurse were talking, paying no attention to me or the monitor.  I fiercely debated in my head whether to just sleep through this contraction.  Forget the pushing, I needed sleep.

Finally, after two hours, the doctor made the call.  Little Phoenix's head was turned, and he just wasn't going to come out.  The doctor was going to pull him out with forceps.

Once the decision was made, the room hosted a flurry of activity.  Nurses getting the bed ready.  The doctor getting himself ready.  At one point, a nurse started wheeling a great big mirror in.  Hubby asked what it was for.  "To see the baby being born."  Without even consulting one another, we simultaneously said, "We don't need that."  The nurse looked surprised, but wheeled it right on out of the room.   I love that Hubby and I think so much alike.

The doctor yanked Phoenix out, which ended up being the only pain the epidural couldn't block, and handed me a child that looked like he had been in the ring with Mike Tyson.  One eye was completely swollen shut, he had a huge Nike swish under his other eye that extended all the way to above his ear, his head was ridiculously cone-shaped, and there were scrapes and bruises all over him.  He was a hot mess.

Despite his looks, he was very healthy.  At 7 lbs, 15 oz, I was very grateful that he did come so early.  Imagine how big he would have been full term.  Ouch.

Before they could even get him cleaned up and back to me, I was begging for food.  It had been 24 hours since I had eaten anything, and I don't do well without food.  The nurses were a bit surprised, though how they were I'll never know.  They are the ones who wouldn't let me eat.  Surely I'm not the first new mom to request food after a full day of labor and delivery.  Although, they weren't the only ones to be surprised by my behavior.

When my mother-in-law got to the hospital 45 minutes after Phoenix was born, Hubby was holding the baby, and I was shoveling unappetizing hospital food into my face as fast as I could.  Not exactly the nurturing, loving mother she had hoped for her first grandchild to have.  Basically, she was appalled.

Once I was fed, I became the picture of a good mom; holding, cuddling, cooing, and all.  Nursing was a problem, as his beat-up face and head caused him some serious discomfort when he was trying to eat.  But we tried.  And tried.  And tried.  Different positions.  Different lactation consultants.  Finally, I told them to leave us alone.  We'd figure it out.  And we did, eventually.  Like a month and a half later.  After lots of pain.  Lots of tears.  Lots of Hubby wandering around with a helpless look on his face.

Remember, we didn't have a camera at the hospital, so no pictures of the swollen, bruised mess that he was.  All we have are the pictures from after we came home.  After his head went back to normal, the wounds healed, and the bruises faded a bit.  Oh, and after the jaundice kicked in.  Anyone know that excessive bruising causes jaundice?  I certainly didn't.  The child spent a lot of time hanging out in front of the window, soaking up the sunshine.

Mostly, I'm simply grateful to be a mom.


Today, I'm linking up with Suzie at "The White House" for her new Mama Mondays. 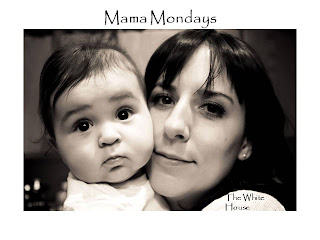 Have a lovley day!