Between the six children, we have celebrated 52 birthdays.

Fortunately, in order to put Hubby through law school, I worked for Kroger as a cake decorator.  Sure, it's not the most high end of bakery, but I learned the basics.  Certainly enough to rock out plenty of birthday cakes for my own kids. (Totally looks like all of those cakes you've seen in every grocery store across the country, doesn't it?) 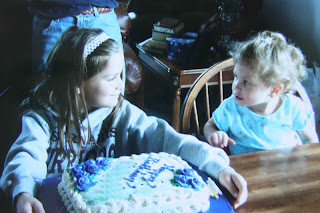 If you are one of those people who used to be my customer, I challenge you to skip the store-bought cake and decorate your own for the next birthday.  It really isn't hard.  All you need are these three basic supplies, all of which can be purchased at any hobby/craft store:

1. Decorator bags - Do not buy generic, cheap, or reusable bags. I have tried them all, and the Wilson ones are the easiest to use and, most importantly, don't pop holes in the sides. 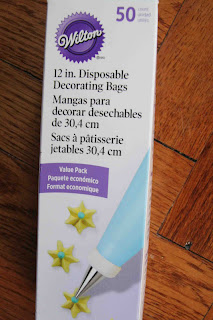 2.  Decorator tips - Buy only two tips to get you started.  With these two, you will be able to make just about any cake you want.  No roses, but plenty of ideas.  (Which I'll get to later.)  It doesn't have to be #3 and #16, just make sure you have a round and a star.  Note:  If you are going to be using more than one or two colors, buy connectors that allow you to change the tips without cutting open the bag.  They are white, wtih a screw-on piece to attach the tips. 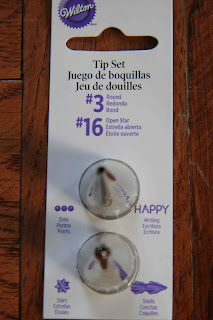 3.  Food color - The gel colors work much, much better than liquid.  You will get a much better, true color with them.  It may seem expensive to buy all of the colors you need, but you just need a little touch to color enough for the cake.  That jar of coloring will last you a looong time.

In my early years of motherhood, I would spend hours decorating cakes for the kids.   For Phoenix's second birthday, I was ridiculous.  I made individual Elmo and Tigger cakes for each guest.  Since I didn't know which one the kids would want, I made one of each for each person at the party. 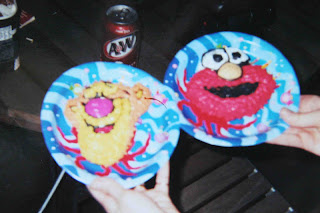 So, one option you have is to buy a mold of the cake you want, then use the star and round tips to painstakingly dot the entire cake with icing.  That is what I did for the Elmo and Tigger cakes.  They also come in large, full-size cakes. 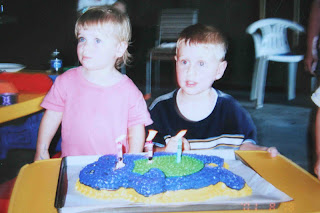 Note:  Phoenix will want me to tell you that he never did like Barney.  The only reason that he has a Barney cake is that someone gave us the mold.  For six months, he thought only of that mold, and was convinced that we needed to use it for his birthday.


If you don't want to take that much time to star the whole cake, you can simply ice the cake, then free-hand draw/decorate an image. 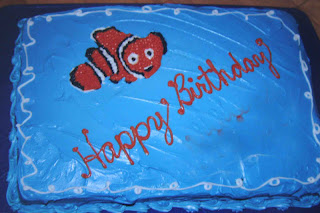 If you don't have an artistic bone in your body, I would suggest the mold cakes.   But even if you have just a little ability to draw, try this.  The kids don't care if it's perfect, just recognizable.

I rarely do these kinds of cakes anymore.  When you have six kids, who has the time?  However, the kids are still excited about their cakes.  I just make them a whole lot easier.

Props are the way to go!

Ice the cake with the colored icing, just like the Nemo cake.  But then, instead of drawing an image, add toys.

I've done a beach scene with Playmobile toys.  (The "sand" was made with crushed Nilla Wafers.) 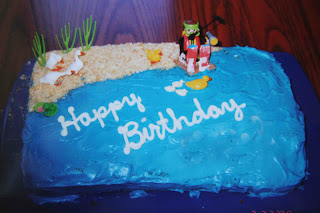 A construction scene with trucks we already owned.  (The building was made with icing and pretzels, the rocks were Whoppers.  The bulldozer was placed to look like it was shoveling the dirt pile, made with a mound of icing.) 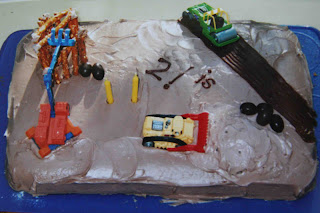 Last year, Giant wanted a soccer cake.  I made the field with green icing, lined it with a white round tip, then made flags and goals with toothpicks.  To personalize it, I cut out a photo of him and some random opponents that made it into my picures, attached them to toothpicks, and stuck them in the cake.  It was simple, but a HUGE hit.  So much so, that Star wanted me to do the same thing for his birthday.  (Too bad I don't have a photo of either of them!)

Yesterday, Cuckoo wanted his cake to be Spiderman and Lightening McQueen playing soccer.  I made the exact same cake for the third time, except instead of his own photo, I used toys.  His action figure was way too big for the cake, but fortunately, Turken has "Cars" Squinkies.  We made a soccer ball out of a marshmallow, and placed them on the cake.  He couldn't have been happier. 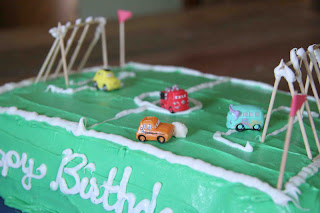 We all thought it was pretty nifty under the candlelight. 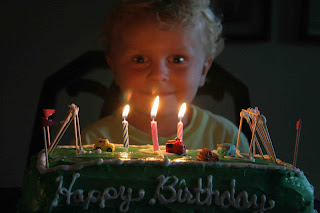 Now, if even these cakes are too much for you, I have even more ideas.

One of Star's favorite cakes took all of 5 minutes to do. 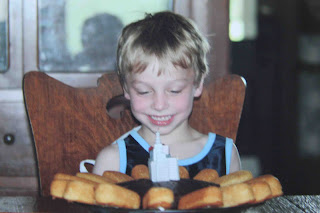 It was a sunflower, made of a single-
layer round cake iced with chocolate fudge and Twinkies all around it.  That massive thing in the middle was the Spiderman candle he picked out.

For his second birthday, Star was a sick little boy.  A fever and everything.  But we didn't want to just skip over the day.  He was way too excited for it.  So, I made a plain white cake, iced it with Cool Whip, and decorated it with strawberries. 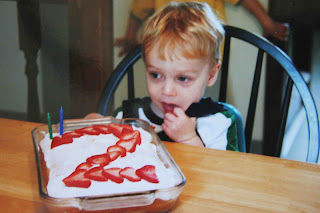 And lastly, if you really don't have time to do any decorating, let the birthday boy decorate his own.  It will not be the prettiest cake in the world, but he will be thrilled to bits to be able to do it. 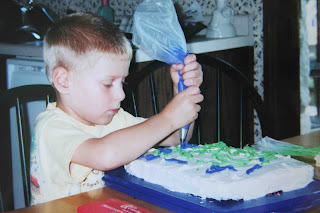 Notice how clean the top of that decorator bag is that Phoenix is holding?  A big pet peeve of mine is when people fill a decorator bag the wrong way.  It does not need to be a messy affair.  All you have to do is fold the sides way down over your hand when you fill the bag.  Only fill the bag halfway, unfold the sides, push the icing down to the tip, then spin the bag so the icing is trapped in the bag.  Simple.  And neat.

As I was going through the kids' photo albums to find all of these photos, I realized that I have been terrible about photographing their cakes.  Of the 52+ cakes, I only found about 15 photos.   And the photos I did find were terrible.  Oh, and almost every one was either a cake for Phoenix or Star.  I couldn't find a single one of Giant's.  And he had some serious cakes.  I once made an entire stadium, with icing heads in the crowd and everything, for a motorcycle race cake.  He is never going to believe that we even celebrated his birthday.

You know he is going to be holding that over my head until the day I die.

If you have any cake decorating questions, just let me know!