Everything I Need to Know I Learned From Monty Python

Any Monty Python fans out there?

I get all sorts of quotes I use in everyday situations.

One of the kids hurts himself, it's, "Merely a flesh wound."

Bad thoughts getting you down?  Just sing.

Sing with me.  You have no choice, really.  This is a song that will stick with you for days.

We've been singing it lately.

School starts in less than 12 hours.

We're trying not to cry or think negative thoughts.

We're trying hard to look for the bright side of the whole situation.

I've found that it's easier to find the bright side when I'm standing in our sunflower jungle. 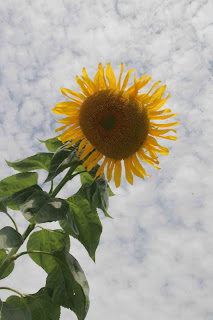 The kids find it while playing video games.

For the last three years, we have had the "Day Before School Starts Do Anything You Want Day."  It is a day that the kids don't have to get dressed, make their beds, or clean their room. And if that weren't enough, they also have unlimited screen time.  It's a huge deal, as they aren't allowed to play video games on school days, and only 30 minutes a day at most on non-school days.  As for TV, they may get to watch a sporting event on the weekend or Wipeout on Thursday night.

On this last day before school, there is a lot of this: 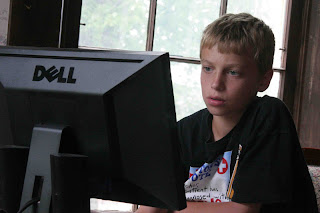 There are only two rules for the day.

1.  You must eat meals.  I found out the first year that they become very engrossed in their games.  An entire day could go by with not one bite of food passing their lips.  So, we had to make eating a rule.

2.  The animal chores must get done.  You can't let the pigs, chickens, and dogs starve just because you are on the verge of breaking some incredible record.

Normally, Phoenix doesn't get out of bed until I drag him by his little toe.  This morning, he was awake by 7:30.  Star said he woke up three times last night, mostly because he was excited about today.  My word, I don't see this much emotion for Christmas morning.

I even let the little guys in on the fun.  Turken didn't move from this position for three hours straight: 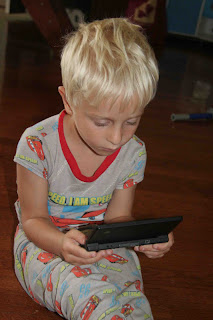 Promptly at 4:45 all electronics were turned off.  Soccer, dinner, showers, and bedtimes were calling.

Did they lose a few brain cells today?  For sure.  I don't care.  They have 180 days coming up in which they can replace them.

See, it's not just the kids who love this day.  I have found that it is the most peaceful day of our entire year.  I didn't hear one argument.  I didn't have to field any complaints.  They didn't make a giant mess.  And I got some much needed canning done.  Totally worth the loss of some brain cells.

And lest you think that I am the most awesome mom ever, I have to admit to one epic fail.  Months ago I made a doctor appointment for Star to have his yearly checkup.  Yeah, it was today.  He had to get dressed and leave the computer for two whole hours.  And he got two shots.  Kinda put a damper on the day.

Tomorrow at 6:00am the alarm will go off, and our school year will begin again, with kids in 5th, 6th, 7th, and 8th grades.  I'm guessing it's going to be a jam-packed year.

I just need to go back to singing.