Reading the paper this morning, I was saddened to see that Neil Armstrong had passed away.

I was concerned by the article on the disparity in charitable giving.

I was curious about the balloon they were using to find drug smugglers crossing from Mexico into remote Texas areas.

And I was shocked to see that dead Asians are now living in our country.

"Some patients have died of overwhelming infections, including some Asians now living in the U.S., although Browne could not estimate how many."

Without a balloon, I would imagine it's pretty hard to get an exact number.

Once I recovered from my reading of the news, the family and I got down to work.  The little boys and I had picked about 40 pounds of apples a few days ago, and those babies needed to be canned.  (the apples, not my actual babies)

Giant did most of the peeling/coring/slicing for us.  By the end, he was a complete pro. 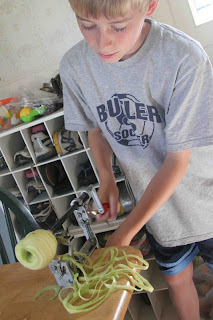 Hubby did the final trim and got the apple slices into the cold water, while I blanched them and filled the jars. 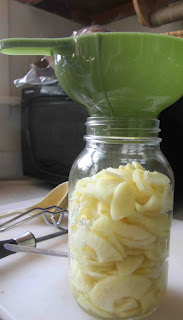 So glad I waited until the weekend to do this job.  With all of the help, it took next to no time at all. 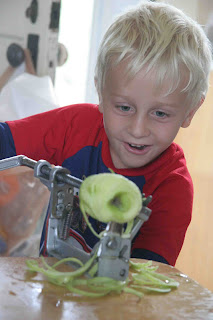 The kids' favorite part of the peeling process was when Giant pulled the rod back and popped the core off the end. The little kids giggled each time he did it... 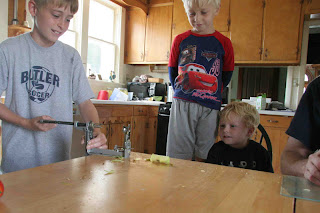 but the few times he managed to shoot it far enough to hit Hubby in the arm, Hubby performed a monstrous overreaction to being hit, which sent the kids into full-on belly laughs.

Despite the drought, it was one of the best years we've ever had with this particular tree.  And because of the drought (we think) there were virtually no bugs.  They were the most perfectly beautiful apples. 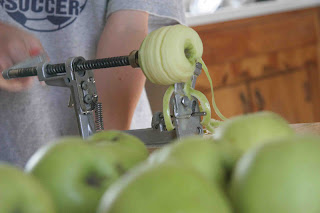 We managed to get two batches done before we had to stop to shower and get ready for church.  The showers were absolutely necessary, as canning apples is one sticky job.  That apple juice gets on everything, including arm and facial hair.

Thankfully, Star was around to scrub the kitchen floor when we were done.  As he scrubbed, with a big ol' pouty lip on his face, it totally made me think of my grandma.  She has told me more than once about her childhood days spent canning.  My great-grandma would gloat about the hundreds of jars put up for the winter, while my grandma quietly seethed, thinking of all the scrubbing she did to clean up the mess made by the produce in those hundreds of jars on the shelves.

Well, come Thanksgiving, Giant and Grandma will have something to commiserate about.

So far, we have14 happy, happy mornings waiting on our basement shelf.

And in about three weeks, we'll be getting some more bacon to go with those pancakes.

As long as we can keep these pigs alive long enough to get to the butcher.

Apparently, that post about the dead pig was a fan favorite.  It took just a few days for it to move onto the "Popular Post" list on the sidebar.

And with the popularity came a new image for me.

With this whole blogger deal, I can look at the stats of how people find my blog.

People are now finding it by plugging the words "redneck pig waterer" into Google.

I would really prefer to be found with the words "chic, fun, creative, hobby-farming".

I just need to keep thinking positively.  It could be much worse.

I could be the gal who is found when people Google "dead Asians living in the U.S."

Email ThisBlogThis!Share to TwitterShare to FacebookShare to Pinterest
Labels: my thoughts, the farm