On Eco-, Old, Losing, and Booming

It is a whole lot easier to be eco-friendly during a drought.  Running to rip damp clothes off of the zip line minutes before a nasty, wind-and rain-filled storm opens on your bare head just isn't all that fun.  And then, what to do with the damp clothes?  Do I throw them into the dryer?  No, because I'm obsessed with being as eco-friendly as possible.  I hang them on the Foosball table handles, the backs of the couches, even doorknobs.  Apparently I care more about the Earth's environment than I do about my own family's living environment.

And another random thought to start our day:  I'm old enough to be the President of the United States of America.  Now, I'm well aware that you only have to be 35 in order to be president, but no one ever would.  It's in theory only.  However, I just found out that I was at Miami University at the same time as Paul Ryan, who happens to be Romney's running mate.   The whole thing just makes me feel old and lazy.  As Hubby said when I read him the info, "Wow, really makes you think how much you didn't do with your life, huh?  And besides that, you apparently picked the wrong Poli Sci major to date in college."  It's why I love him.  He's so stinkin' supportive.

Finally, we have come to the actual post for the day.

When I play games with the kids, be it board games, card games, or sports games, I don't always let the kids win.  It is very important that kids learn how to lose.  How to deal with the emotions that come with being beat.  It is my job to teach them how to be a good sport and still have fun when you aren't winning.  But, I do let them win occasionally, because it's just as important to know how to win gracefully.  A child who runs around hollering, "I won!  You lost!" isn't any better than a child who intentionally knocks the board over in a pout of, "I lost because he cheated!"

This past weekend, all of the years of teaching them how to win and lose came in handy.  The boys had a total of seven soccer games, and we ended the day with a 0-7 record.  That's a whole lot of losing.  The boys took it in stride, knowing that it wasn't the end of the world.  Knowing that they have work to do, for sure, but not getting down on themselves about how bad their teams seemed to be.  They learned a few things, and they had fun playing a game they absolutely love.  That's a win.

And, that day of losing got them ready for this coming weekend.  We have a tournament in Cincinatti this weekend.  All four kids, four games each, in two days' time.  We went to this tournament last year, and the kids are well aware that they will probably get their soccer cleats handed to them on a platter.  It could be ugly.  (Don't ask why we're going to this particular tournament.  We're beginning to think that it is simply a character-building exercise.)  But they are still looking forward to it.  They always look forward to playing soccer.

Or maybe they just love the hotel full of their friends, where they roam the halls, swim in the pool, and party in someone's room for hours.

Either way, they are excited to go.

Me, not so much.  Staying in a hotel with six children isn't exactly my idea of a great time.  Two rooms, two king size beds, two pull-out couches, 16 soccer games to logistically figure out, two little kids to occupy and feed during the whole affair.  Makes me want to throw a bit of a tantrum, actually.  Maybe throw something and holler about things not being fair.

OK, last two random thoughts for the day.  I am completely useless in the first minute or so of any emergency. My brain just doesn't move that fast.  As I was innocently sitting on the couch, typing the paragraph about my tantrum, the dogs started going crazy outside.  They took off running, barking their full heads off, there was a loud BOOM, and the house shook a bit.  My pulse immediately went up a few hundred beats per second.  When I heard the boom and felt the house, I simply grabbed the phone and wearily headed toward the part of the house to which the dogs ran, praying the whole way that it wasn't some crazy person blowing something up to gain access to our house. Yes, that ridiculous thought actually went through my head.   Nothing simple or reasonable.

And this is where the other random thought comes in.  If a tree falls in the woods, and no one is there to hear it, does it make a sound? I'm inclined to think it does.  Specifically, a loud BOOM, accompanied by a bit of earth-shaking. 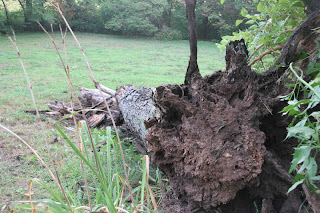 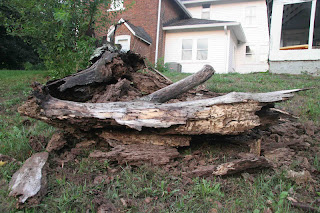 Just so you know, I'm not so obsessed with being eco-friendly that we will be cutting this tree up with hand saws.  The gasoline-powered chain saw will be getting some use in the very near future.