Making sure children have high self-esteem has been one of those buzz topics for quite a few years.  Everyone agrees that children should feel good about themselves.   A healthy self-esteem leads to many things, including confidence and a willingness to try new things.  The confusion comes with the discussion of how to help children achieve a healthy self-esteem.

Positive reinforcement in the form of praise is certainly a good way if used sparingly.  Telling a child that she did a great job every single time she colors a picture, even when she didn't put any effort into it, isn't the way to do it.  However, if a child takes her time to do her best, she deserves the accolades.  Even if that picture is covered in swipes of color outside the line, or includes a picture that doesn't look anything like the object she was trying to draw, as long as she tried hard, I'm going to tell her all of the things I like about the picture.

While this is a good start to a healthy self-esteem, the best way to achieve it is to actually try new things and succeed at them.  My kids had a whole slew of opportunities to do just that this past week.

Vacation Bible Camp was a big week for a few of the kids.  Cuckoo graduated from the nursery and was able to rotate through stations with Turken.  Last year, they were both very unhappy about leaving me during the three-hour camp.  This year, not only were they not a bit sad, they rocked out those stations.

I had many people tell me how well Cuckoo did.  The craft lady told me that she had never seen a two year old concentrate so hard on every detail of his craft.  One of the leaders told me that she and another adult couldn't take their eyes off of him during the music station.  He was about as cute as a kid can get doing all of the motions with the songs.

One station they went to was mine, the Bible Exploration room where we act out the stories.  This year, since I didn't have another adult to help me, I had the kids take the roles in the stories (and added many roles we normally wouldn't have so more kids could participate).  Turken, who is as shy as they come, volunteered and did a great job as a sheep on the day we talked about Jesus being the good shepherd.  He never would have done that last year.

At the end of each day, they were both so excited to tell (or show) Star, Giant, and me all about the activities they did.

As for Star, this was the first year that he was allowed to be a volunteer instead of a camper.  He was the student crew leader for the incoming second graders.  He wasn't exactly thrilled to be assigned to that job, as his best friend was with the preschoolers, and his other friends were in the nursery.   Second grade was too old as far as he was concerned.

Despite his disappointment, Star was a helpful leader for the kids.  He corralled, encouraged, and calmed all the live-long morning.  Even on Friday.  His birthday.  The day that we had camp, had to go pick Buttercup up from her camp, then head right back to church, where he was to help grill the hot dogs for the VBC wrap-up party.  (Talk about new experiences.  All of the older Boy Scouts were on the 10 day hike, so it was just the youngest three scouts and two dads manning the grills, making enough hot dogs for 200 people!)  Not exactly an ideal schedule for an 11th birthday, but he never complained.

We made up for it, though.  On Saturday, we went to a movie and out to his favorite restaurant.  I took an idea from my friend at Raise Them Up for one of his birthday presents.  Star didn't think he was getting a gift, as we bought a pro soccer jersey for him at the last soccer tournament.  We couldn't let him go without a gift on his actual birthday, though. 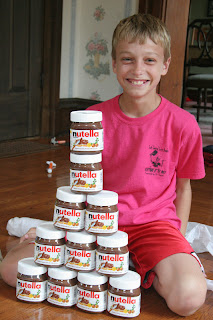 He is forever asking me to buy Nutella.  I've only purchased it twice, as it's not really healthy and it is a bit pricey.  However, for his birthday, I went ahead and got him 11 jars all for himself.  He asked if he could just keep a spoon in his room.

Giant also had the opportunity to build a little self-esteem this week.  His coaches have decided that he needs to play on a team with older kids, so on Tuesday he went to the tryouts for that team.  The older boys were not told what was in the works, so many asked him what he was doing there.  He told me that he felt a bit odd, but gave the best answer he could.  He told them that the coaches thought he needed to be challenged more, and their team is where it would happen.  He and the boys certainly handled the situation better than many of the parents did.


Buttercup's chance to gain some confidence came at CYO camp, an overnight camp filled with outdoor activities.  This is her third year going, and she always learns or tries something new.  The high ropes, 20 feet in the air, or the low rope obstacle course are the two things she's conquered in the past.  This year, they came across a fire pit that still had a few little hot coals.  She and her friend decided that they were going to get those coals going into a fire. (Don't worry, the counselor was there the whole time.)  At first it didn't look like they were going to get it.  The rest of the group was getting impatient, but Buttercup was determined.  Finally, thanks to the flip-flop they used to encourage the spark, a flame was ignited.  She has told us this story at least four times in the last two days.  She is so proud of the fact that she got an idea, stuck with it, and accomplished her goal.  A fire, for crying out loud!

And lastly, Phoenix.  He took trying new things to the extreme.  Ten days on a hiking trip with the Boy Scout troop in the Black Hills, Mount Rushmore, Jewel Cave, and several other awesome stops.  Lots of freedom, lots of new experiences.

Like rock wall climbing.  Not a man-made, wimpy thing.  A real wall of rock. 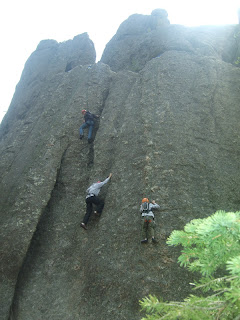 And then there was the hiking along a cliff.  I saw this photo and thanked the Lord above that I wasn't a chaperon on this particular trip.  Since having children, I have been petrified of heights.  When up high, all I can think of is the way my children's heads will look when they splat on the concrete below. 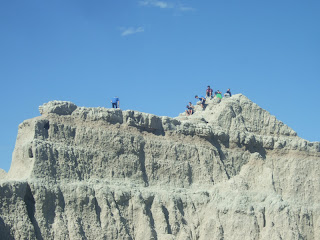 Those are boys in his troop on the top of that cliff.  Phoenix had done it earlier in the day, so he hung back to take pictures.  I told Phoenix that if I was there, I don't think I could have let him do it.  I would have been a basket case.  He told me to go to the next photo to see how high they really were. 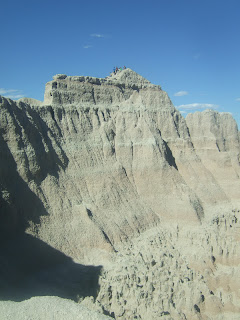 I couldn't speak, as I had thrown up in my mouth.  Sorry for the language, but all I could think was, "Oh, hell to the no!  Who let my baby DO that???"

Fortunately for him, I wasn't there, and he had a wonderful time.  And man did he gain some self-esteem.

I gave him my little point-and-shoot camera to document the experience.  I am astounded by some of the images he brough back.  I'll have to show you a few besides the ones from above. 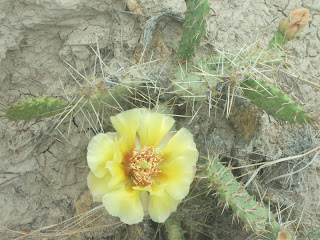 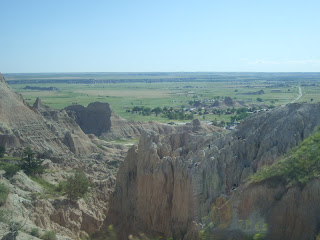 So, I will encourage my little boy to be a little sheep in a little play in my VBC room, knowing it will probably lead to me having to look the other way when that little boy wants to climb a ridiculously high cliff hours and hours away from home.

I'm just glad that they are still happy (and alive!) to come home and tell me all about the new things they've done and learned.