What Do NASA and a Wedding Dress Have in Common?

So, we've been married 18 years and one day.  And we dated for 7 years before marrying.  That's a whole lot of years, people.

At dinner last night, the kids were asking us to tell more about our dating years and our actual wedding day.  It was shocking, actually, to have them all so interested in what I was saying for an extended period of time.

It could be because they couldn't laugh hard enough about every aspect of our wedding.

Buttercup asked what I wore.  All I had to say was, "It had long sleeves." and off she went into a fit of giggles.  "Sleeves???" she sneered.  In this day and age of Say Yes to the Dress, she knows that NO ONE wears sleeves.

That's when Hubby chimed in.  "Don't forget to tell her about the hat."

I shot Hubby the you-are-going-to-pay-mister glare, then muttered, "No, more like a cowgirl hat.  A blinged-out cowgirl hat."

I then had to talk real loud-like over their guffaws to explain that the hat wasn't my fault.  When I took my mom to the shop to see the dress I had picked out, she fell in love with this blasted hat.  Being the agreeable daughter that I am, (and terribly unconcerned about fashion that I was) I agreed to the hat.  In hindsight, I'd say it was a mistake.

They begged and begged for me to get the dress out and show them, because of course I still have it.  All boxed up and preserved.  Why, I ask you, did everyone preserve their dresses back then?  It's not like I wore a classic-type dress.  It was following that horrible puffy-sleeve fad.  Not a chance in this world that my future daughter would wear it.  But, because everyone else did it, I thought I should, too.  Funny part is, the box doesn't have any window in it.  I know for sure that I will open it up someday, and my dress won't even be in it.  Some other shmuk out there will be examining the photos of her puffy-sleeved dress to see if perhaps her memory has failed and she is mistaken about what her dress actually looked like.

I didn't open the box, so the kids gave us our present that they had worked on all day.  It was a book of cards the kids had made, with some "cupons" for extra chores and good behavior for us to redeem.  I especially like the one from Star that says, "One hour of peace/quiet from me."  I guess one out of six being quiet is better than none!

Buttercup went an extra step and wrote a poem for us.

They met on swim team
he could see a gleam
in her blue eyes
as she swam by
they got married
and soon after carried
a small baby boy
full of joy
five kids later
the dad made her
stop having kids
or he would blow his lid
through thick and thin
they stayed within
each others hearts
and will not part.

Oh, she makes me smile.  I guess if paleantology doesn't work out as she wants, there's always Hallmark. 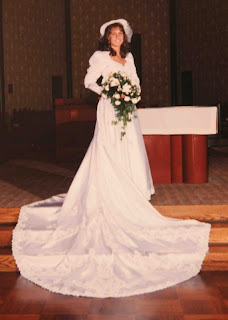 The kids did the dishes for us, and Phoenix suggested we, "do something romantic".   When I asked if he had any suggestions, all he could come up with was a movie.  Or, he could take the kids out to the van for a bit, so Hubby and I could have the house to ourselves.  I was scared to death he was going to follow that with, "Would 5 minutes be long enough?"

Instead of banishing everyone to the van, we put the little ones to bed, played Scrabble, and ended the night with an International Space Station sighting.

Yes, we saw the Space Station.  It was so completely cool.  Just as the sky was getting dark, at 9:48 to be exact, a very bright spot popped up and sped across the sky.  Up and over our heads, taking less than four minutes to get from one horizon to the other.  The kids were scattered around us, some on the barn roof, one standing right next to me.  All I could hear were the wows.  It was brighter than any star, and it was going so fast.  The fact that six people are up in that large dot, 200 miles above us, is just mind-boggling.  Not one of us could pull our eyes away until it popped back out of sight.

In the span of two hours, I went from Interesting Mom who could tell them stories about their dad, to Butt of the Joke Mom, who had the nerve to be almost fashionable on her wedding day, to Respected Mom, who deserved coupons ensuring some relaxation time, to Most Awesomest Mom who plays games and lets them do cool things like stay up late and be awed by bravery and modern technology.

No wonder my head is usually spinning.

If you want to see if/when the Space Station will be visible in your area, go here.