My word, I love staying at home with my kids.

Yes, there are days that they drive me bonkers.  But they would do that regardless of whether I worked or not.

I know that not everyone loves the job.  I wouldn't either if I just stayed at home with them all day.  So we don't stay home much.  Today we had an unexpected adventure day.  I was supposed to watch a friend's little girl all day, but they changed plans at the last minute.  I had seen an add for a kids' play place in Columbus, IN, so I decided we would go there for the day.

I had no idea how much downtown Columbus, specifically Washington Street, had to offer.  We were gone for seven hours today, without a single whine, argument, bicker, or complaint.  Over and over again I heard, "Thanks for bringing us out today," or, "Thank you for letting us spend the day here."

So, if you are ever passing through Indiana, specifically Columbus, here are some things you will find, all on the same street!

1.  We started at Kids Commons.  I had a coupon, so it only cost us $4/person to get in.  It's normally $6.  When we entered, I was a bit worried that the big kids woud be bored.  It seemed to be geared for the littlest ones.  That wasn't the case at all.  Even Star, who is famous for getting bored and complaining, loved the place.

There are three levels, each with multiple stations.  There's the Japanese house 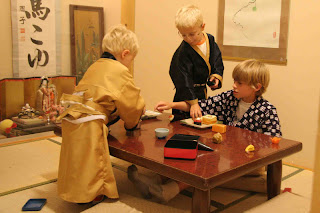 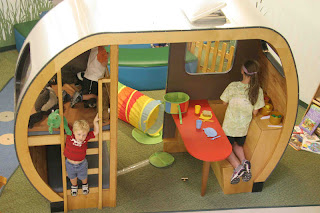 The bubble room was quite fun.  The kids practiced getting inside the bubble a couple at a time 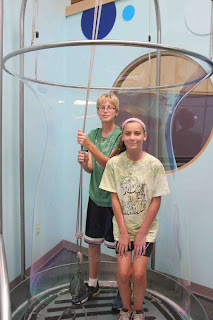 before trying to get everyone in it.

They spent a good long time at the bubble table 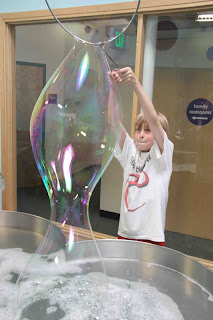 before they moved to the Explorahouse.  It was a version of a house under construction.  There were all sorts of nooks and crannies to crawl into/through.  But the highlight was the toilet.  It wasn't just any toilet.  It was a gigantic toilet that you actually got flushed down.  Through a drain/slide that came out at the bottom of the house.  Awesome.


The top floor of the Commons was devoted to excercise.  Giant biked four grueling miles, dripping with sweat and completely red in the face. 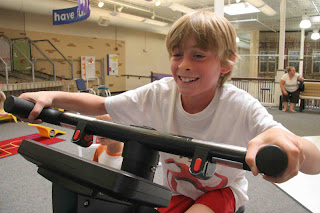 Turken spent the majority of the time playing pop-a-shot, 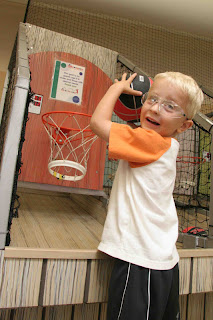 but he did take some time to build some muscles with the miniature weight-lifting equipment. 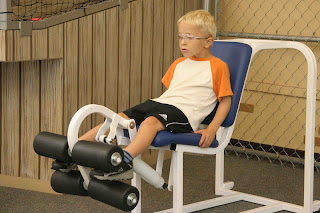 Cuckoo tried to lift some weights, too, but his short stature gave him some trouble. 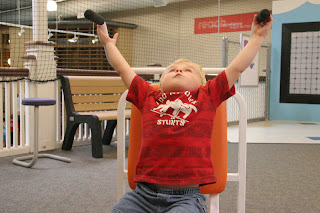 There was a nifty light wall at which you were actually supposed to throw little playground balls.  Think dogdeball without the head shots and tears. 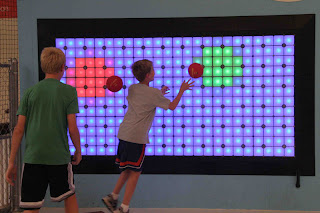 So, yeah, even the big kids had a good time.  In all, we spent about 3 hours there, and we could have done more, but we had to get to...

2.  Zakaharas (or something like that).  It is the original ice cream parlor which was opened in 1900 by three Greek brothers.  It still has the marble/onyx soda fountain, the organ that plays by itself, and the gorgeous Tiffany lamp.  We love us a good historical stop, but especially when it includes ice cream. 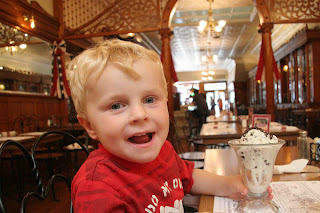 Giant wanted me to take a picture of his waffle bowl, and as I got the camera up, I caught sight of Turken in the corner.  My boy loves his ice cream.


Once our bellies were over-full, we headed across the street.  We had seen a structure in the window and wanted to check it out.

3.  The Commons is some sort of shopping/office place.  In the little food court area there is a two-story climbing structure and all sorts of other things on which to climb, slide, spin, crawl, and have general merriment. 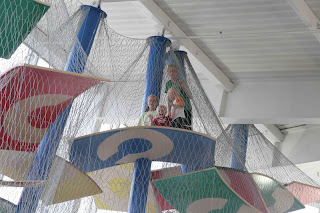 And it is completely free!  One of the funniest moments was when Buttercup helped Cuckoo on the spinning thing.  When he got off, it looked like he was OK, and started walking.  But then he started to veer to the left, stumbled, and crashed.  It was hilarious.  I was across the room laughing my head off, telling Buttercup to help him.  As he gets up to only fall down again, she doesn't lend a hand, because she has fallen on the ground in a fit of giggles.  He saw us laughing, so he he starts to wobble and fall on purpose, much to our delight.

4.  Next, we headed to a toy store named Imagination Station.  Their first store opened about 7 years ago, and I did a bunch of photography work for them.  Now they are on their second store and going strong.  They have all sorts of quality toys.  Not just the fad things you find in the chain stores.  But their brilliance comes in how they sell it.  They open and display samples of at least 1/4 of the things they sell.  The kids are encouraged to play with all of these things. I can see what my child likes/is drawn to, then buy it while the child is distracted by the fun.  Plus, they will gift-wrap it for me right then and there.  So smart.  We bought gifts for the two birthday parties my kids will be attending this weekend.

5.  And lastly, we simply walked.  The entire sidewalk is made of bricks.  Many of the bricks have been purchased and say things like, "In memory of" or, "The Smith Family."  But then there were lots of random, funny ones.  Things like, "We could have been a chimney."

Our favorite was this one: 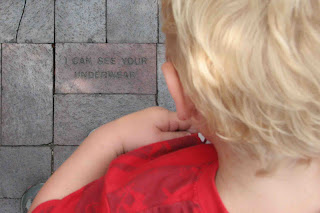 (For those that need their glasses to see this, ahem Dad, it says, "I can see your underwear."  When we read it out loud to the little boys, Cuckoo immediately did this: 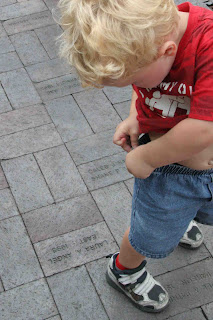 I don't know if he was making sure he was wearing underwear or if he was looking for the person/thing looking at his underwear, but it cracked us up.  Even funnier when he then went over to Turken and tried to look inside his pants.

We walked several blocks, just strolling and reading, both sides of the street. 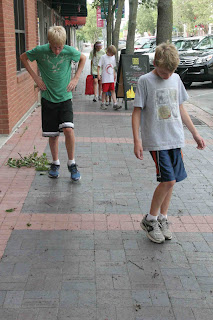 We only ended our trip because Hubby was going to be heading home from work.  I feel bad when we go on fun adventures, and he has to come home to an empty house.  It's like we're rubbing it in that he has to go to work while we go have some fun.

Just before getting into the van, I asked the kids if I could get a group photo.  Buttercup laid down in the shade, and one or two followed suit.  I told them that I could take a photo like that, but they needed to circle their heads.  All but one knew what I meant. 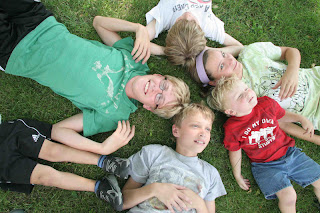 Still cracks me up.

But, I got him turned around and all was well. 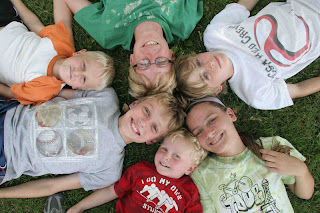 Yes, I do love being a stay-at-home mom.  I do believe my kids are just as happy.

Except on those days when I'm driving them bonkers.