Take Me Out to the Foodfest

Throughout my childhood, my dad would take me to baseball games.  We were fortunate to have a minor league team nearby and would go there several times each summer.  I don't remember my siblings coming along, but I know they must have.  I simply remember spending a fun afternoon with my dad.  We would each get a hot dog, then head over to the giant communal pumps to get our ketchup.  (Unlike most baseball fans, I am un-American.  No stadium mustard for me.)  We'd get programs and keep track of the stats.  Never for the whole game, but at least the first inning or two.  I still remember watching Albert (Joey) Belle play.  I thought it was so cool that I got to watch someone who made it to the big leagues, and cause such a stir once he got there, before anyone else in the country knew who he was.

Once or twice each summer we would take the drive up to Cleveland to see an Indians game.  Same game, only much more impressive.  Not because the players were better.  My dad always said that he liked minor league games better, as those guys were still trying hard to "make it."  It was the huge stadium and the massive number of fans, some of whom were crazy, that made the experience memorable.  They guys in the stands who dressed up, painted their bodies, played the drums, wielded Chief Wahoo flags, and created general pandemonium were just plain fun to watch.

Looking back, I can see that the fond memories aren't because of the baseball games themselves.  The games were a chance to get away from our tension-filled house.  As with many divorced and remarried families, tension and unrest was the norm.  Baseball was a reprieve.  A place to relax and spend time with the fun dad.  The dad who wasn't caught in the middle of his wife, ex-wife, and daughters.  I'm guessing it was his chance to breathe and relax, too.

It just so happens that here in Indianapolis, we have a great baseball stadium.  (What are the odds that the three baseball teams that I have cheered for in my life are all named the Indians?)  The field is situated in such a way that sitting in the stands, you have a great view of downtown. 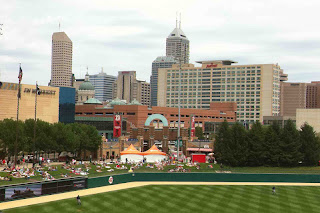 If you look closely, you can see the area behind the outfield where fans bring picnics and watch the game from the comfort of their own blankets.

We've done that one time, when the kids were little.  They don't remember it at all, because when it comes to baseball games, my kids are spoiled rotten.

Hubby's office has a suite at the stadium.  Once or twice a year, he gets the tickets and invites one or two clients and their families to join us for a game.  My children love those days.  They enjoy watching the game.  They like to wear their mitts in the hopes of catching a fly ball.  They get a kick out of playing bingo.  (The stadium has bingo cards, where the spaces have different scenarios to check off.  For example, three runs in one inning, or short stop catches a pop fly.)  But their main reason for wanting to go certainly isn't about relaxing with their dad.  It's about the food.

The suite is always stocked with drinks, hot dogs, and peanuts.  But Hubby loves him some stadium junk food and goes way overboard with the selections.  So today, for our first game of the season, we walked into the suite, where a big ol' plate of big ol' cookies and brownies begged to be eaten. 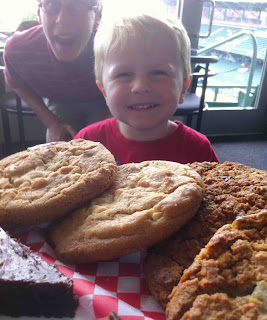 In the third inning, Hubby came through with a basket of Cracker Jack bags.  Enough for everyone to have his own. 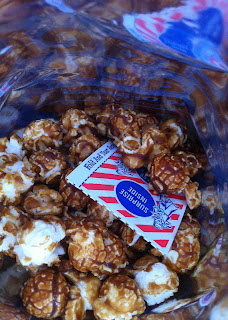 In case you are wondering, the prizes from the Cracker Jacks are getting even more lame.  Not one tattoo in the bunch.

And lastly, in the sixth inning, out came the ice cream choices.  Some got the cookies n' cream Dippin' Dots, but most of us, the real ice cream eaters, got the chocolate "malt". 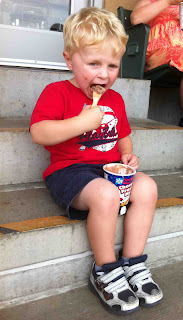 In the eighth inning, Cuckoo shockingly started complaining about a stomach ache.

In the midst of all of this eating, the kids really did watch the game.  They got their bingos.  They cheered for the few times the Indians actually got on base.  It was the first baseball game that Turken was old enough to actually pay attention, and pay attention he did.  He sat next to me for most of the game, and we discussed each and every detail of it.

At one point, Turken asked me, "Whose kids are we watching play?"  When I could talk without letting on that I was giggling inside, I told him that these were daddies, and this was their job.  We spent a good five minutes going over this, but he couldn't fathom people being paid to play baseball, just like his dad was paid to go to his office.  It made no sense to him.

At one point I said, "Aren't they lucky, getting paid to have fun every day?"  That's when Giant jumped in with a "Fun?"  I pointed out that he was planning to be a professional soccer player, where he was planning on having lots of fun.  His response, "Um, soccer is fun."

Mostly, I have to agree with him.  Baseball is a whole lot of waiting around for a few seconds of excitement.  The awe from someone throwing a ball at 95 mph and the shock of someone actually being able to hit a ball thrown at 95 mph, only lasts for so long.

But only at a baseball game can you laugh at a spectator who wasn't paying attention when a fly ball came his way, hit the wall above him, then had a direct hit in the guy's cup of beer, which then splashed all over him.

Baseball may not be the most exciting game in the world, but that doesn't mean it can't provide some serious entertainment.