Feeling Special in a Big Family 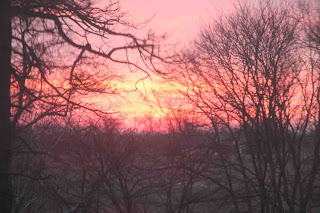 Yes, it may be cold outside, but from indoors, the view is glorious!

Some may be wondering how I got away with taking only one child on an extra trip to Disney.  How did the other kids react to that?

Hubby and I work very hard to make sure each of our kids feels special and loved by us.  I remember my siblings complaining that I, as the oldest, was the only one with a completed baby book.  All of my kids have them.  Throughout the year, we take each child on dates, so he/she has some one on one time to do something fun.  We make sure that we help each child find at least one thing that he/she does better than his/her siblings.  But there is one thing we do that the kids love the most.

With this many kids, family vacations will always include a car trip.  The cost of plane tickets would be completely prohibitive.  So, each year, one child gets to go on a plane trip with a parent for a long-weekend vacation.

When the kids were younger, we chose the destination.  The trip either coincided with Hubby's work trip or we went to visit a friend.  Now they get to choose what they want to do.

When she was seven, our daughter got to go to New York City. 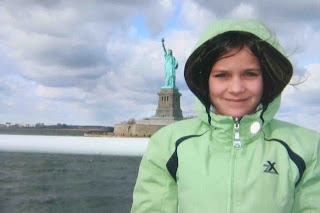 The next year our oldest chose Denver, Colorado, where he hiked and went white-water rafting. 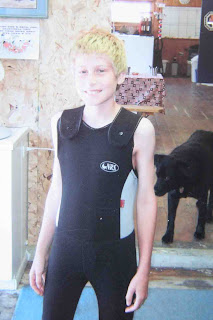 The following year, Hubby happened to win the ticket lottery to see the Colts play in the Super Bowl.  The now ten year old got to go with him. 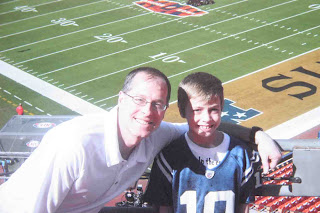 This past August, the nine year old chose to go to Glacier National Park for some horse-back riding, hiking, and fishing. 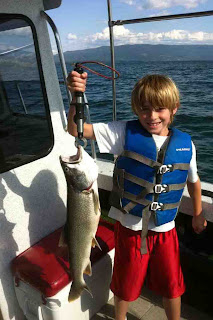 We say these trips are for the children, but they are for Hubby and me, too.  It is awesome to see how each child acts when the siblings aren't around.  When they don't have to think of what the other kids want to do.  When they don't have to wait their turn to speak their minds.  They act differently and do things we never would have expected.  When we took our daughter to New York, we let her choose a TV show to watch before bed.  She chose to watch professional wrestling in Spanish.  Never saw that coming!

I did feel a bit guilty about the nine year old getting another special trip out of order when he got to go to the soccer tournament.  I was worried about how the other kids were going to react.  Even though they never accuse us of being unfair, I was afraid that this might be a problem.

Not only did they not grumble about his extra trip, they were happy for him.  They really wanted to know which rides he chose to ride.  They were curious about the tournament, and didn't begrudge him for getting to go.

This year, the three year old is old enough to get into the rotation.  Next year, the youngest will.  If we are going to get one more trip in for the oldest before he heads off to college (Oh, have mercy.  Did I just mention my baby in the same sentence as going to college??)  we're going to have to make these trips more often.  Insead of one per year, it may have to be one every seven months.  I'm not going to complain!  I can't wait to see where they take us next.