My head is about to explode from all of the snap decisions I've made this week, but the rooms are coming along nicely.

Because I know your first thought is for the welfare of my family, we are eating well.  We've had meatball subs with frozen meatballs I left in the crock-pot for a few hours.  We had loaded baked potatoes one night.  Chicken nuggets I had made and frozen were on Wednesday.  The kids actually cheered when my co-worker gave us an electric skillet to make some french toast.  We went out Thursday, and had leftovers on Friday.  We had $5 Little Caesars pizza Saturday, and I will cook hot dogs for the second time in my life as a mom for dinner on Sunday.

The kitchen and mud room:

They are actually looking like rooms!  The insulation and drywall is up.  The lights are in.  I can finally imagine what the final look will be.

I have ordered the sink (a big farmhouse sink with a ten inch apron), faucet, paint color, range hood, mud room flooring, and the sink for the mud room.

The painters will be here Monday to get started.  The cabinets are supposed to be delivered the week of December 3.  We're getting there.

There are many this week.

1.  We knew it was only a matter of time before the previous owner's mistakes were uncovered.  Monday was the day.  All of the windows he put in the soon-to-be-mud-room-but-used-to-be-smoke-house were put in wrong.  Not only were they not level, they were leaking and rotten.  We had to replace four windows and the siding all the way around the outside of the mud room.

Can you say, "Budget buster"?


2.  Our fridge opens 150 degrees.  That means that the original design, where the fridge was up against a wall, wouldn't work.  We had a few choices, and of course the one that we consider the best choice is the most expensive.  I am happy with the look, though.  We are putting a vertical line of apothecary drawers and wine cubbies between the fridge and the wall.  Hubby and I had a long discussion about this one.  He didn't want to spend the money.  I did.  The alternative was to have a 5 inch piece of wood that just covered an open, unused space next to the fridge.  In the end, we agreed that Hubby being unhappy until we paid the bill was much better than me being unhappy for the rest of the years that we live in the house.

3.  All of these extra costs have sent Hubby over the edge.   More than once I have found him in the dumpster.  He has become a dumpster diver.  He props up a ladder, gets in the dumpster, and digs to find things to salvage, because "Those builder guys are just wasteful."   When I made fun of him he said, "Look at this.  We can use it as a fence post." 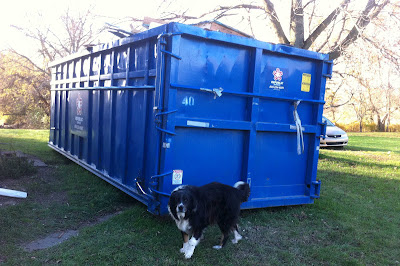 I'm all for being green and reusing materials, but these posts are huge, and he had to carry them out of there on a ladder in the dark.  Oh, and I have no idea what fence he is planning on posting.  Those "posts" will sit in our barn for years.

4.  The guys did a great job putting up a dust barrier between the kitchen and the dining room.  No dust has made it through. 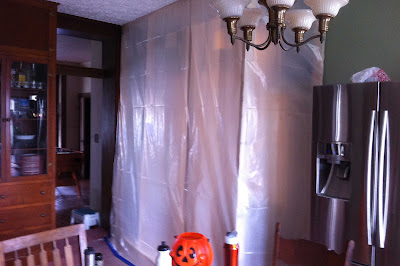 Only one problem.  See that light at the top of the photo?  The one over the dining room table where we eat all of our meals?  Especially dinner, which occurs at 6:30, which is after sunset now that we changed clocks.  Guess where the light switch for that light is?

We've had some nice, romantic lighting for our dinners lately.

5.  I'm thrilled with the plans for the new pantry.  One that is deep enough to hold some food and has a door that works.  This is where it will be going. 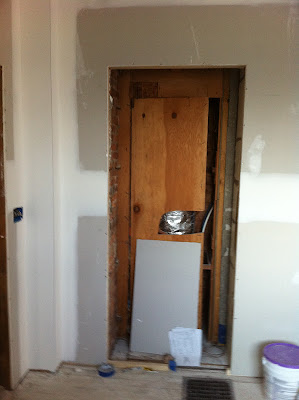 The back wall of the pantry butts up against the game closet in the "game room".  When one of the boys opened the closet to get a game out, we realized our error in the sealing of the kitchen. 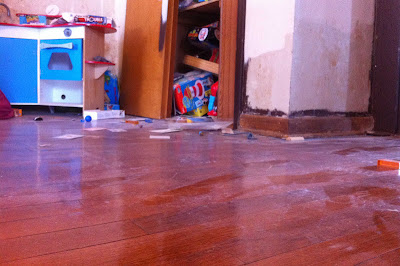 I have been avoiding the task of cleaning out the closet.  I really, really don't even want to think about how long this is going to take.  And how much sneezing will be involved.

I am now on the hunt for two pendant lights and the drawer pulls/cupboard handles.  For both, I'm looking for something to tie in with the rest of the house.  Something farmish, but Victorianish, perhaps copperish to pull out the copper-looking flecks in the counter.

I also need to think about a small table and benches/chairs for a corner of the kitchen, and some stools for the kitchen island.

I'm off to enjoy some more of this GORGEOUS weather we are experiencing here in Indiana.