Besides the fact that I have a friend who is in the Secret Service, I have another who is in the Air Force and has been to the Middle East many times as an information gatherer.  Plus, my dad was an undercover narcotics agent when I was little, then in charge of the undercover agents for about 8 years while I was growing up.

1.  Facial hair is encouraged.  Apparently criminals have facial hair and/or trust people with facial hair.  This is a photo of my dad when he was an undercover agent.  (Just a touch creepy, no?  I have to say, a beard without a mustache is just a stupid look, unless you are Amish, of course.  I'd apologize to my Amish readers, but Amish folk don't have electricity nor read blogs the last I heard.) 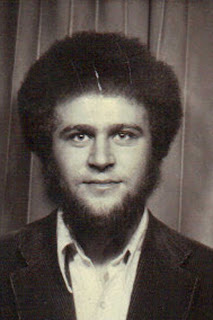 2.  Undercover agents are bold.  They have to be in such a dangerous job.  Many times they are funny with it, too.  Our Secret Service friend once offered to take a photo of some tourists.  After they handed over their camera, he spent a minute lining them up just right.  He did the countdown of 1...2...and then took off at a sprint, as if he were stealing their camera.  He ran for about 100 yards, while the tourists went crazy, before finally stopping and letting them know he was just kidding.

3.  Secret agents are just that.  Secret.  Their names will never be in the phone book.  (For my younger readers, the phone company used to have a book with everybody's phone number and address in it.)  They won't have their family info in the church directory.  It makes it a little difficult for their daughters and the boys trying to call them.

4.  It's also difficult for relatives.  My grandparents got tons of calls from people looking for my dad.  I always thought it was terrible that while we were safe and anonymous, my grandparents were out there with the wolves for any and all crazy criminals to find.

5.  One beautiful summer day, my brothers, my friend, and I went for a long walk in some woods by our house.  We ended up going much, much farther than we'd ever been before.  Farther than we should have gone, for sure.  At one point we noticed a man, but didn't pay him any mind.  At first.   When we saw him again, and then again in another spot, we were very worried that he was following us.  We took off running, but got all messed up and circled back.  We saw him one more time, but that time we saw that he was talking with another man.  My dad to be specific.  I had never been so afraid in all my life.  Not because we were actually in the vicinity of a drug dealer informant, but because I knew that if my dad saw us, we'd be dead meat.

We ran the entire way home, straight to my mom where I burst into tears and blabbed the whole story.  My mom told us that we were probably right, and there was no reason to tell my dad.  Never speak of it again.

(Dad, if you haven't heard this story before, water under the bridge, right?  I won't be grounded over Thanksgiving will I?)

6.  Children of undercover agents have exit plans.  I was always afraid that one of the guys that my dad arrested would get out and come after us.  I thought for sure that one day during an all-school mass some guy with a gun would come in looking to kidnap us.   Why it would happen at Mass, with hundreds of witnesses, I'll never know, but that's what I thought.  Since I was the oldest, my plan included crawling under the pews (We were in a future-thinking parish that didn't have kneelers to block my way.) to collect my siblings and duck out the side door.  (I was a server and knew all the secret doorways.)  I'm happy to say that I never had to follow through with that plan.  I'm sure it would have worked, though.

7.  Undercover agents have certain advantages when raising children.  We knew that if we ever got into trouble with the law, Dad would know about it within seconds.

8.  Another advantage: props.  All parents tell their children to stay away from drugs.  Just say no and all that jazz.  My dad took us to the undercover office, opened the safe, laid out the different kinds of drugs, and said, "This is what they look like.  Now you know.  If you ever touch them, I'll hurt you."  Enough said.

9.  Children of secret agents know things their peers don't.  We frequently went to the undercover office.  I felt so important to know that the building everyone thought was just an ordinary office was sometimes, after a huge bust, stuffed to the rafters with marijuana.

10.  Lastly, undercover agents know things the general public doesn't.  It drove me batty when my dad would tell me I wasn't allowed to spend the night at a friend's house for confidential reasons.  I remember one friend in particular.  She was allowed to come to our house as much as she wanted, but I couldn't go to hers.  I was told that he could tell me the reason when I was older.  I haven't talked to that friend since graduation, and I don't remember what it was her mom was doing that kept me from going to her house.

And to end, I want to thank my dad and my friends, veterans all, for all they did and sacrificed in order to do their jobs.  It is a hard calling, and they have done it greatly.