Nothing makes you feel like you are going to wet your pants more than knowing that there is no bathroom for you to use.  Such is my life all stinkin' day.  Today is the day that the plumbers and electricians are here, along with the normal crew of two, to get the old pipes and wires out and install/move the new ones.  Really wish it could have been done yesterday while I was at work and a variety of other places that had working restrooms.

It is Day 5 of the big kitchen redo.  So far, it hasn't been all that bad.  Sure, my temporary kitchen looks like this: 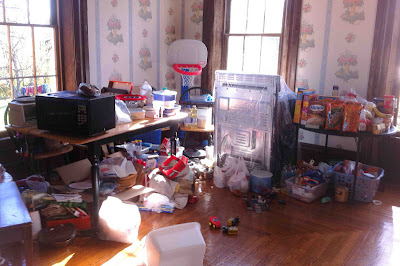 The kids have survived on milk, fruit, and cereal or bagels for breakfast each morning.  I only have one hard-boiled egg left, so I'm going to be trying out the burner on the grill this weekend.  In the five years we've had this grill, we have never used it.  Hope I don't blow us up.

The big kids buy lunch at school every day, as I've found the $2.50/day is cheaper than if they were to pack.  Plus, it means they get a good variety, unlike the little boys, who eat PB&J most days of their lives.

Dinners have been fine.  Grilled burgers Monday and white chili in the crockpot Tuesday with chicken I had cooked before the stove went away.   Wednesday, Meijer had individual frozen dinners on sale, so I let the kids each pick one for dinner.   Downside of that is that each dinner takes 8-10 minutes in the microwave, so we didn't all get to eat together.  Last night we went out, as Phoenix had soccer an hour away from home, and tonight it is chicken quesadillas, pineapple, a salad, and Halloween candy.

No one is starving, and everyone is happy to not to have to deal with dirty dishes.

I am unhappy about the amount of waste we are creating with all of the paper products we're going through.

If you haven't seen what our kitchen looked like before, go here for a tour.

At the end of Day 1, it looked like this: 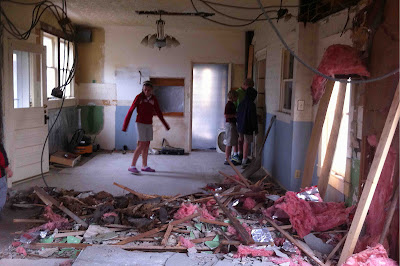 Buttercup is standing right where I used to spend 50% of my day, right next to the stove and sink.  The rubble is what is left of the wall that used to be there.  To take the photo, I stood in the old 1800's kitchen.  Back then there was a porch and yard between the house and kitchen, but when the "modern" kitchen was added to the house, they used the porch area.  The modern kitchen and the 1800s kitchen shared a wall, but we couldn't get into the 1800s kitchen without going outside.

Day 2, more major demo, but some rebuilding as well. 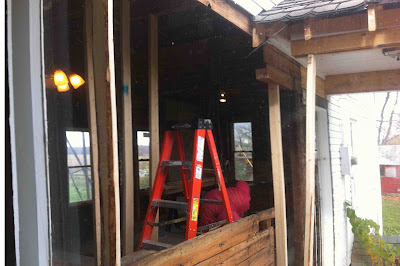 I was a touch surprised to see that I no longer had an outside wall in my kitchen.  This is where the window over the sink used to be.  We moved it over a bit to give more room to the cramped corner, so off with the wall!

This is how the room looked this morning: 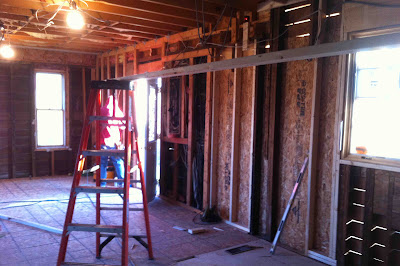 Starting from the left, the door used to be a window.  Between the now-door and the new window here on the right, two doors have been removed and changed into walls.  The wall between the kitchen and mud room is going up about two feet from the new door and is getting framed today. 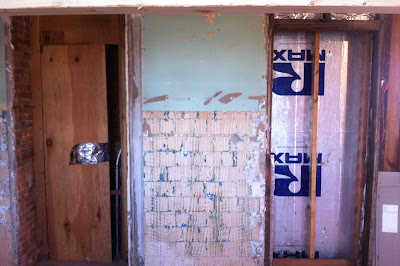 This is where (left to right) the small, broken pantry, the fridge, and the window to nowhere used to be.  They will be turned into a much bigger pantry and a "message center", both with working doors to hide any and all disorganization when company comes.

The floor of the 1800's kitchen was slanted just a touch, if you consider 3 1/2 inches from one wall to the other "just a touch".  The floor had to be ripped out in order to even everything out.

The ceiling of the 1800's kitchen was a few inches shorter than the ceiling of the "modern" kitchen.  The modern kitchen ceiling had to be dropped, and my transom cabinets had to go from 15 inches to 12.  I think.  Something like that.  Just so I don't have an open area above the cabinets, I'm happy.

Getting to know each other:

One of the demo guys was eating and working at the same time.  He put down his sandwich for a minute, and when he went back, he found Roy the Wonder Dog had eaten it.

Someone hurt himself this morning.  I don't know who, as there is an impenetrable, murky barrier between us and the kitchen.  I just know there was some ouching and grunting, and some "Are you OK?s coming from behind the barrier.  I didn't see anyone race to the hospital, so we should be good.

Work begins at 7:30 each morning, and most days I am showered and dressed before they arrive.  I worked Tuesday, Wednesday, and Thursday this week, so I needed to be.  On Monday I learned that it's just a bit creepy to take a shower directly above the room where strangers are working.  I made that mistake Monday, but not today!  I showered nice and early then put my PJs and robe right back on.

While the guys work, they have a radio playing.   Luckily, I like their taste in music.  And I like that I can frequently hear them singing along with the radio.  And even more, I like that they cannot carry a tune.  It means they won't be judging me when I bust it out with them.

They work together on projects much better than Hubby and I do.  While I have heard an occasional, "I need another 1/2 inch.  Give me a half an inch!"  I haven't heard anyone yelling at each other to, "Stop talking!  I don't see you over here on the ladder trying to fix this!"  I also haven't heard any cussing.  There is almost always cussing when Hubby and I do home improvement projects together.

I am hoping that these guys never meet Hubby.  They may end up talking and telling Hubby just how much time I waste on the computer during the day.

Pick out the kitchen sink, faucet, lights for above the island, and the cabinet/sink for the mudroom.

Considering the age of this house, and the number of things we find wrong each and every time we undertake some renovations, I am thrilled with the progress.  I don't know what the agenda is exactly, but I have been told that the drywallers will be here on Thursday.

I'm off to see just how bad the old outhouse behind the chicken coop is.  I can't hold it much longer!