Not Going to Join the National Opossum Society, but...

I tell you what, the opossum doesn't get the admiration it deserves.

Sure, it is one of the ugliest creatures ever put on this earth.  I am completely with you on this one.

And yes, it has a stupid name.  That "o" at the start makes a person sound like she is talking to a baby.  As in "Oh, possum, you are so silly."

However, they do have some very good points.

First, they are marsupials.  The only ones in North America.  Related to the kangaroo and all.   Doesn't everyone want a relative who lives in Australia to provide cheap lodging when she takes a dream vacation there?

Most importantly, though, they are brilliant.  The way they "play possum" is fascinating.  We've watched their cleverness in action many times here on the farm.  Not one time has an opossum been killed by our dogs.  Which is astounding, as our dogs kill absolutely everything else they can get their teeth on.

When the kids were heading out the door for school yesterday, they noticed an opossum right near the walkway.  The dogs were calmly lounging in the flower beds.  (Who am I kidding?  They are weed beds.  Every time I plant flowers, the dogs dig them up, so I've given up until such a time as the dogs die.)  At one point, we saw the opossum stand up and slowly creep away.

Picture someone sneaking up on another with a purpose of scaring him.  The exaggerated high knees, quietly tip-toeing across the floor.  That's what an opossum looks like.  When an opossum is creeping, it is as cute as an opossum can get.

Eventually, Hershey will realize that her prey is escaping, and will simply go grab it and bring it back.  As gently as a mama dog bringing back her baby. 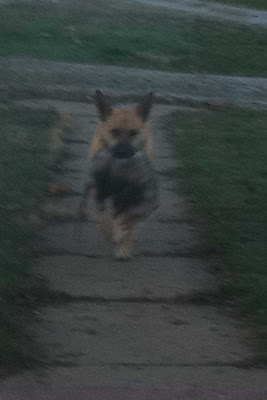 She plopped the opossum back in the front yard, then went off to play. 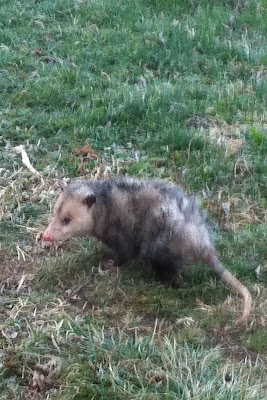 That clever little opossum waited until the coast was clear and tip-toed her way towards freedom yet again.

It actually made it to the tree line on the third attempt.  Unfortunately, Hershey tracked it down and brought it back to the yard.

Finally, the opossum got the break it was looking for.

The kitchen workers arrived, which totally distracted the dogs.  The clever opossum took full advantage and snuck out to freedom. 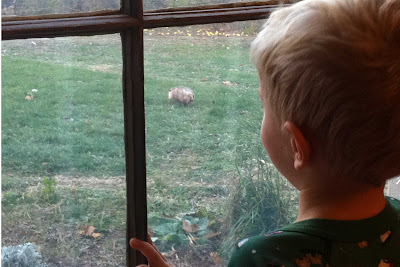 We have a lot to learn from those ugly, ill-named creatures.

Just because I can't stand them, doesn't mean we can't learn from them.

When faced with adversity, play dead.  Not forever, but until no one is looking.  Then quietly sneak away.

Someone confronts you about something you did or didn't do?  Drop to the floor and pretend you are dead.  Patiently wait for the aggressor to go through the stages of confusion, boredom, and distraction.  Once she's distracted, quietly tip-toe out of the room and into the safety of your car.

I think I will use this the next time one of the kids gets cranky and demands dinner.  I'll let you know how it goes.

But, that won't happen until I get this blasted Christmas card done.   I swear, blogging has ruined the Christmas card for me.  I am so distracted by all of the post ideas that I can't focus on the card.  It will be a good one, if I ever get it done.

And yes, I realize that of all my big post ideas that are distracting me, I chose to write a ridiculous post about an opossum.

A hint about the card.  A quote.  I can't explain going crazy or being crazy.  Crazy is just being myself.