For three years I have had to stand on the sidelines and watch fourth graders have all of the fun.

For three years I have tapped my toes, wishing with all my heart that someone would ask me to join in.

Well, today was the day.

Someone asked me to dance!

I rarely work in my kids' classrooms.  The logistics of it just make it difficult.  But there are two things that I always do.  In first grade, I always take a turn as a Fabulous Friday Reader.  And in fourth grade, I make sure that I am a part of Pioneer Day.

It is a day for the fourth graders and their teachers to dress in pioneer clothing.  (Many of the outfits have been passed down from sibling to sibling, family to family for years and years.)

It is a day for the kids to bring their lunches in pails and wax paper.

A day to make candles.  To write for a newspaper.  To see a wagon be assembled.  To make butter and eat it with some cornbread.  To play games that children of the time period would play.  And a day for the kids to dance the Virginia Reel.

With Phoenix's class three years ago, I helped in the candle-making room.

With Buttercup's class two years ago, I led the newspaper room.

Last year, with Star's class, I was in charge of a game.

And with Giant, I got to run a different game.

(But I did sneek in and get a photo of him making a candle.) 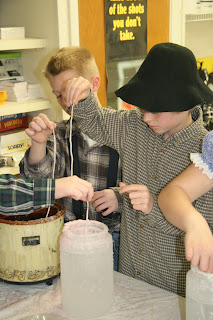 All of those jobs were fun, and I thoroughly enjoyed doing them.  But at the end of the day, I always had to sit back with all of the other parents and watch the kids dance the Virginia Reel.  The kids practicecd for weeks beforehand, so the parents weren't allowed to jump in with them.

Two weeks ago, Giant told me that they didn't have enough kids to fill out the reel.  They may have an opening for me.  I jumped on my chance.  I made him teach me, and we practiced at home.

Giant told his teacher that I would be ready if I was needed.

Today, after the games were over, the music teacher lined the kids all up in the gym.  I stood on the sidelines, trying not to look too anxious.  There are 60 fourth graders, so I was having a hard time counting to see if anyone was missing.

At one piont, a teacher asked me if I could be a boy if I had to.   Could I?  I gave birth to five of them!  I can totally pretend to be a boy.

And then the sky opened up and a voice beckoned me with, "Please go take your spot across from your son."

Woohoo!  I threw my camera at the nearest mom, told her to take some photos, and ran to my spot in line.  Giant had a grin from ear to ear.

I went the completely wrong way when we were the lead couple, and I started to swing the girls instead of the boys.  Confusion followed, kids were yelling at me, teacher was rolling her eyes.  Nothing like a little bit of chaos to really get a square dance going.

But we got back on track, and for the rest of the dance I took instruction from the sweet little girl next to me, down to the curtsey at the end.

I had my fun. I think my group had fun.  Giant didn't look too embarrassed.  All is well.

I have six years to practice before Turken is in fourth grade. 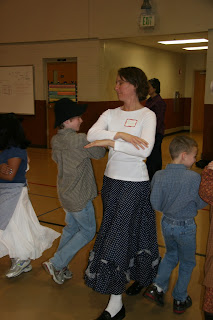 Surely the teachers will have forgotten my misstep by then.
at 1:59 PM