I have, in the past, mentioned that I'm old.  More than once.

I'm proving it daily, but for once it has a benefit.

I am now old enough to know a whole mess of people with whom I did not attend school.

We belong to a fairly large, very active parish.  Over the years, Hubby and I have participated in many, many of the activities offered.

For example, we play volleyball.  Why wouldn't you participate in something whose motto is, "Be good or be fun!" 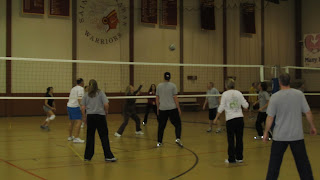 We are most certainly more fun than good, but on Saturday we were lucky(?) enough to ride the coattails of our good teammates to win the season-ending tournament.  Won the coveted T-shirt, but we played from 7:30 to 11:00 with no more than a 10 minute break.

That marathon really showed how old we all are!  Let's just say that not one person from either team skipped out onto the court for that last game!

For now, we can impress our children with all of the folks we know.

When Buttercup tells me of her fairly new good friend, and how the girl's dad died when she was little, I astound her with the news that I knew the girl's dad.  While she gawks, I tell her a bit about her friend's dad and how he died.

When she tells me of another friend who started going to their school, I can say, "I know, honey."  Her mom and I did a MOMS session together a few years ago.

Buttercup had these friends over on Friday night to celebrate her birthday, along with a third girl with whom she's been friends since first grade.  (Pause to view the fun time they had making cupcakes.)
I also surprised Giant this weekend when he asked to invite a friend over.  It was someone he had never mentioned before, but they have been playing tag at recess.  I immediately said, "Sure.  I'll call his mom."

Giant was impressed, as I knew he'd be, that I knew the boy's mother.  We met when the third grade moms got together to play Euchre every month last year.

This whole being impressed thing will end at some point, I know.

One day I will become my dad and my grandma.  I will start saying things like, "You know so and so.  She lived down the road, her dad was a salesman, she had two brothers.  Well anyway, she just got married."

And my kids will (hopefully) be nice, nodding and pretending that they know of whom I speak.

Until then, I will dazzle them with my knowledge.

When one comes home and says, "Hey Mom, can so and so come over?  I don't know where he lives, but he plays soccer,"  I can say, "Certainly.  He lives just down the road from school, his grandma watches him on Friday nights, he has brown eyes, and he loves mashed potatoes."

And he will be totally dazzled, I'm sure.