The big kids were never, ever allowed to have gum when they were little.  Thoughts of gum in hair, carpet, couches, clothes, and car seats led me to tell my kids that gum was an exotic, adult-only delicacy.  Fortunately, Phoenix is a gullible kid, so we were able to keep that ruse going until Buttercup ruined it around...maybe...age 10.  Even once they knew about it, I never bought it for them.  As a result, no one knows how to blow bubbles.  I'm pretty sure I cannot claim the title "Fun Mom" for that reason alone.

Cuckoo has been allowed to chew gum since he turned 5, and he's been asking me to teach him to blow a bubble ever since.  After a week of sessions, this as far as he's gotten.

Reminds me of the time I tried to teach my grandma how to blow a bubble.  She looked just like that.

Can't tell you how much I hate to buy eggs.  We go through at least 3 dozen a week, and those eggs not laid by my chickens aren't anywhere near as good as the ones to which we have become accustomed.  And the vegetarian-fed chicken ones I've been seeing annoy me.  Chickens aren't naturally vegetarians.  They love to eat bugs.  I know this vegetarian thing means there aren't any animal-byproducts in the food.  Chickens don't naturally eat dead animals, either. The cage-free but no sunshine bugs me, too.  I'm guessing it all just annoys me because I'm buying eggs.  I'll get over it in about 4-5 months when our chicks are full grown.

Since it seems I'm never going to get to tell the whole story, and we're weeks past the event anyway, I'll just give you the quick version of Cuckoo's birthday dinner.

5:30: As we are heading out the door to his restaurant of choice, Cuckoo tells me his stomach hurts.  I tell him he's fine, as he has been fine all day long.
6:15: We are a family of 8 squished into a booth made for 6 small people  (Think airplane seating without the personal space armrests afford.) when our food is brought to the table.
6:16: Cuckoo doesn't eat a bite and doesn't balk when siblings eat some of the chips off of his plate.
6:17: Cuckoo vomits nice and quietly and neatly and profusely onto his plate of food.
6:17:02: Buttercup draws all the attention Cuckoo was kind enough to NOT draw by screeching over and over, "I'm going to be sick!  That is so gross!  Get me out of here!"
6:17:10: Giant calmly and quietly states, "Well, I guess we won't be eating any more of his chips."

Basically, just another time in our family history where our kids make a very public display of illness.

So, I have an iPad and the big kids have old iPods.  Recently, Giant started using iMessages to text his friends.  His friends do group texts.  A LOT. Until after Giant goes to bed and even in the morning after Giant has headed off to school.  I normally wouldn't care, but I do now.  My iPad dings every single time one of them texts.  My iPad is full of messages between 12 year olds.

Even worse, any time I message my friend in Japan, Giant gets it.  I don't need my 12 year old getting texts between my friend and me.

Anyone know what to do about this?

Still mighty sad about having all my kids in school.  I ran into someone I haven't seen for a while while at the grocery store.  She said it took a minute for her to recognize me, because I didn't have any kids with me.  When I told her that they were all in school, she actually started to cry.  Of course that meant I started crying.  Right there in the middle of the baking aisle.

I bought cake, because we are celebrating our third of three birthdays in 2 weeks.  Giant's birthday is today!  I bet you can't tell how old he is today... 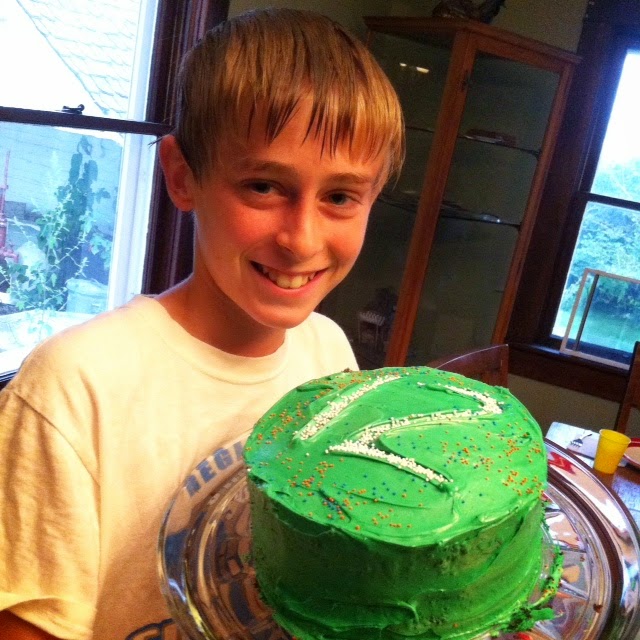 And with this, I can officially say I used to be a cake decorator.  I no longer take more than 5 minutes to add some color and sprinkles to the birthday cakes.  Lamedy lame lame.

However, in 2 weeks, I'll be spending approximately 3 days to make Bryan's beloved birthday red cake.  That makes up for all of the lameness the boys endured.

And with that, I'm done.  If you have the time, head on over to Jen's to take a gander at her (and some of the many linker uppers) 7 Quick Takes!