Twists of Many Kinds, None of Which Are Edible

The situation:  Indianapolis, specifically the south side of Indianapolis, has a large population of Burmese refugees.  Five children in Cuckoo's class are children of refugees.  Because he notices everything, Cuckoo noticed that these children's parents don't speak English.  And because he must talk everything to death, we had a long discussion about refugees.  I then put it out of my mind.

The mostly unexpected twist:  I never told Bryan about this conversation.  He took a couple of kids to McAlister's one night, and as they waited to order, Cuckoo noticed a Burmese family already seated.  Because he frequently restarts conversations completely out of the blue, he turned to Bryan and asked, "Why are brown people here?" Bryan is baffled and shocked and embarrassed and immediately started the shushing.  Cuckoo cannot be shushed.  Instead, he perked up and said, "OH!  I know! There are better houses here!"

The unexpected twist:  He lost it at 3:00 in the morning.  He came into our room to tell us.  I was only half awake and told him to leave the tooth on my dresser.  We would take care of it in the morning.  I didn't even ask him if he was bleeding.  And then, in the morning, I never even saw the tooth.  It was a busy day, and I was in a hurry to get out of the house.  I didn't get home until after he was in bed, with the tooth securely placed under his pillow.  The tooth fairy took it, so I actually never even saw that first lost tooth once it came out of his mouth.  Poor, poor 5th child.


The situation:  Last week several teachers and Bryan and I filled out assessments.  On Monday, we got word from Phoenix's doctor that she is sure he has ADD.  We had pretty much assumed it before this, and had been trying all sorts of things to help him get himself together.  Nothing worked.  So we decided to put him on the lowest dose of Vyvanse (a prescription medicine).  The plan was to start the meds on Wednesday morning.

The startling twist:  For a variety of reasons, I couldn't get the prescription picked up until right before the pharmacy closed on Tuesday.  I came into the parking lot from the back of the building, and when I pulled around the side of it, I almost ran into a car.  It was parked parallel to the building, and a police car, with lights flashing, was parked behind it.  As my eyes tried to adjust to the headlights of two cars pointed directly at me, another police car careened into the lot and pulled up next to the other police car.  I then noticed a man with his hands high in the air standing in the line of the headlights of the first police car.  I may not be the most street smart fake farmer in the world, but I knew that was no place for me to be.  I slowly backed up and nonchalantly left the lot.

Phoenix started his meds on Thursday.

The situation:  The day for the pigs to leave for the butcher arrived.  After much gnashing of teeth, eye-opening revelations, and hard work on Bryan's part, the two remaining pigs were in the barn waiting for the real farmer/pig transporter to arrive.  Loading the pigs shouldn't be too hard, so I was on my way out the door to take Star to practice then on to Phoenix's first official game as a varsity player.  I even remembered to take my camera.

The very predictable twist:  Nothing is every easy when pigs are involved.  As Star and I headed for the car, I decided to stop and take a quick photo of the tractor backed up to the barn.  You know, for a stock photo in case I ever needed it.  I snapped one... and then a second shot, since the dogs had moved into their normal, pig-loading position. 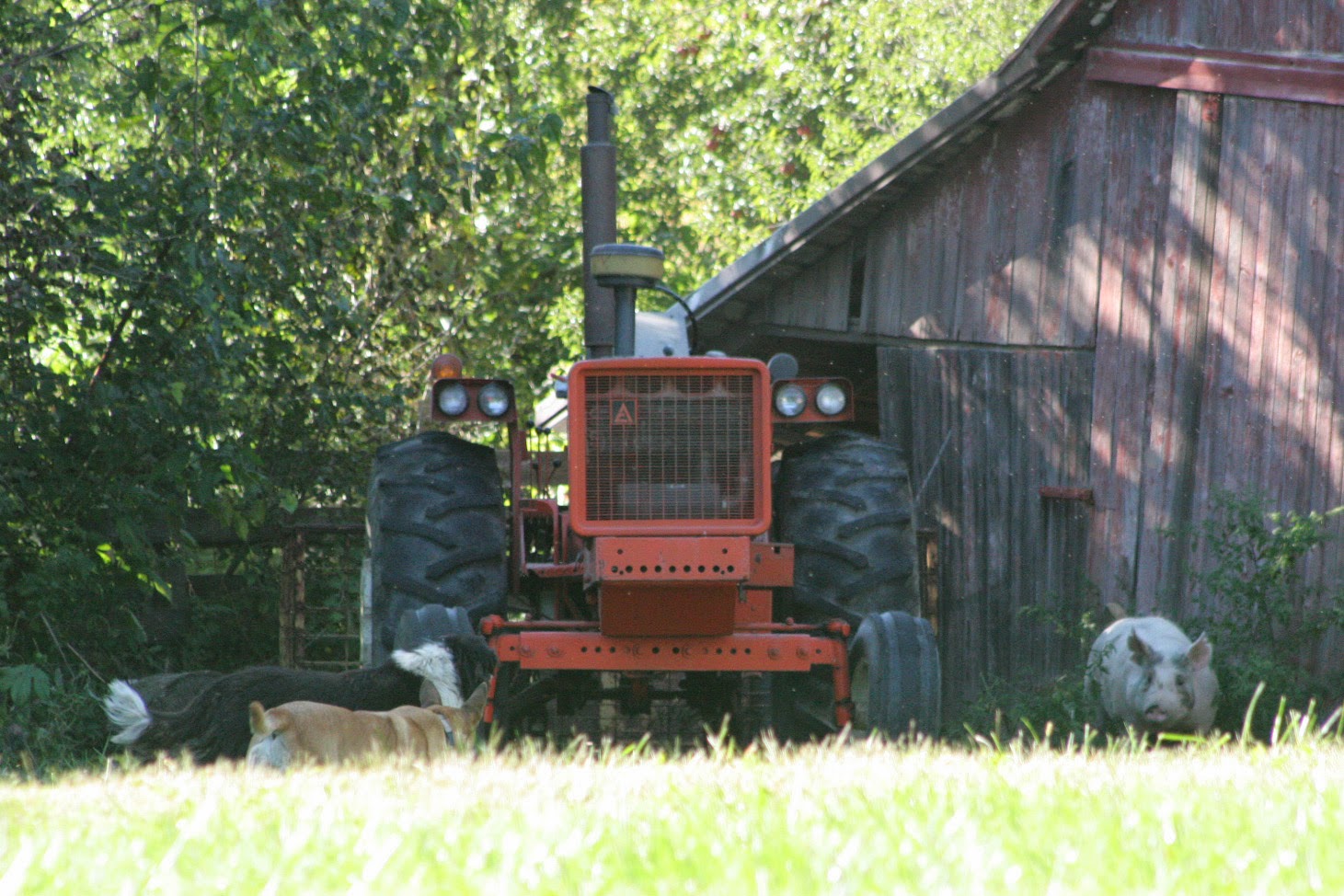 Notice anything wrong in the photos?  (In the first one, the pig's head is barely visible, just squeezing between the barn and the cage Bryan and the farmers were trying to get him into.)

I threw the camera in my car and started hobble-running down to the barn, yelling, "Ouch!  Pig's out!  Ouch!  Pig's out!"  Fortunately, the dogs stayed right on the line and kept the pig from heading out into the open yard.  I managed to get down there before it got around the corner to the backside of the barn.  It turned around and headed towards the big barn.  I knew that if it got to the other side of that barn, we'd be in gigantic trouble, so I hobble-ran around to the other side, this time only yelling, "Ouch!  Ouch!"  I got there just in time to throw a food trough in the path of the pig.  It turned him around and straight at one of the real farmers.  Between him, the dogs, and luck, they got the pig back into the barn.

I never did see Bryan during the debacle.  Pretty sure he was trapped in the barn.

The situation:  Cuckoo isn't the biggest fan of being kissed, but he does allow me to kiss him occasionally.  Each morning he gets out of bed and comes to cuddle on my lap.  I have to ask him if it is a kissing day or not before I plant one on the top of his head.

The naughty twist:  Earlier this week, before I could even ask, he said, "It will be a kissing day...if you let me watch TV.  If I can't watch TV, it will not be a kissing day."  It seems the big kids have yet to tell their little brother that it is never a good idea to give Mom an ultimatum.  That boy will never see another episode of Wild Kratts if he keeps this up.

The situation:  Loads of things have been happening around here that I want to write about.

The way that it is twist:  Because of those things, I have no time to write about them properly.