I Finally Got to See an Orangutan 30 Some Feet in the Air and Other Things for Which I'm Thankful, TToT Week 66

After the birth of each of my kids, I was back to my normal size fairly quickly without having to change the way I was already doing things.  My sister always complained that it just wasn't fair.  With each pregnancy, she would cross her fingers and wish that THIS would be the one that hung on.  The one which caused me to have to buy larger pants.  It never happened, much to her chagrin.

Well, my sister will be very happy to hear that while it wasn't a pregnancy, it was a knee that did me in.  Since May, I have gained 10 pounds.  All because I've been sitting around doing nothing.  Being unable to go up and down stairs, feed the animals, go for a walk, play with the kids, clean my house, do yardwork, weed the garden, or go to the zoo has caused my pants to get tighter and tighter.

I am happy to say the sitting around has come to an end.  My knee isn't back to normal, but I am finally able to start getting back to a normal activity level.  I've been taking care of the chickens, doing laundry, cleaning the house, making dinners, and just moving in general.  It's been exhausting, but it feels good.  I am astounded how quickly a body gets completely out of shape!

We had a normal amount of chaos this week.  Sure, the kids had us running until as late as 10:00 pm, but there were no major catastrophes.  No scheduling snafus.  No injuries.  That makes for a good week.

As I now am back to working around this little farm, I am repeatedly thrilled with all that it provides, even in its disastrous state.  I was able to make dinner last night, and more than half the ingredients in the Shepard's pie came from our own yard.  The apple and pear trees feed us while the mulberry and persimmon trees feed our chickens.  The large yard allows us to dry our clothes and sheets outside, thus avoiding even higher utility bills.  The food scraps and chicken bedding get composted to help grow the veggies in the garden.  We may be a long drive to get anywhere, but living out here has afforded us a very good life.

While we do grow and raise a lot of our own food, I still spend plenty at the grocery store each month.  I don't cut coupons, mostly because I don't have time and there aren't coupons for the things I spend the most money on.  I couldn't be happier that my store has an alternative.  Meijer has this thing called mperks.  You can clip coupons on line and they are just automatically taken off when you check out.  I use that some, but my biggest savings come from their rewards program.  In one month, I can earn up to 9 different rewards, just for buying the things I always buy.  Just this month I've earned $15 off my bill.  When I spend $90 more, I'll earn another $20 off.  It's awesome.  AND I don't have to give them my email or anything else.  Just my cell phone number.

Soccer is in full swing to say the least.  Weekends are filled with hours and hours of games.  I am so happy to be at a club which has coaches who stress learning fundamentals, having fun, and becoming better people, not just better soccer players.  On Thursday, the club had it's annual build your own soccer ball night.  Each player has to make a ball with materials from around the house and bring it to practice.  At practice, everyone, including coaches, take off their shoes and play some games barefoot with the homemade balls.  No refs.  No parents watching.  Just kids having loads of fun. Just like kids all over the world do.  Along with the homemade balls, the kids are encouraged to bring soccer balls and cleats and other soccer gear to donate.  Everything brought in is given to organizations which supply kids in undeveloped countries with soccer equipment.

Still speaking of soccer, I love to watch Phoenix play.  He is not what you would call a confident teen.  He is quiet and practically scared to death to ask adults questions.  (I once had to drag him to the librarian's desk and coach him through what he would say to her once he got there.  He just wanted to find a book.  He was 14.)  However, on a soccer field, he is a completely different person.  He was actually unanimously voted captain of the JV team by both his teammates and his coaches.  He loves the game and is very good at helping others become better players.  He's confident and a great leader.  It's astonishing, really.

And still speaking of soccer, Buttercup has finally, after three weeks, been cleared to play again.  She had her first game on Wednesday and played most of the game.  She played well and her head didn't bother her in the least.

Now that we have 2 kids in high school and 2 in middle school, we pretty much have to go to football games.  I am way more worried about going than I ever was when I was in high school.  I don't know all that many people at the high school, and I worry I'll be the dork sitting alone in the stands.  Fortunately, I have a friend who feels the same way.   We text each other beforehand to make sure the other will be there and meet up.  Makes my Friday nights a whole lot more enjoyable.

We have had a couple of days with perfect weather.  If we could have 75 and sunshine every day, I'd never be unhappy.

Cuckoo and I took full advantage of the weather on Friday by heading to the zoo.  We have been members there for 16 years.  I have been at least 100 times.  I am never bored with it.  In other zoos, I felt bad for the animals, being locked up in a little cage.  Zoos are changing, people.  I don't feel sorry for the animals at our zoo.  The zoo staff is constantly building new and better enclosures to give the animals a more natural habitat while giving visitors a close-up look at the animals.  This time, we finally were able to see the completed orangutan exhibit.  We were not disappointed.  No joke, if you are ever in the Indianapolis area, let me take you to the zoo.  Not only can you see the orangutans... 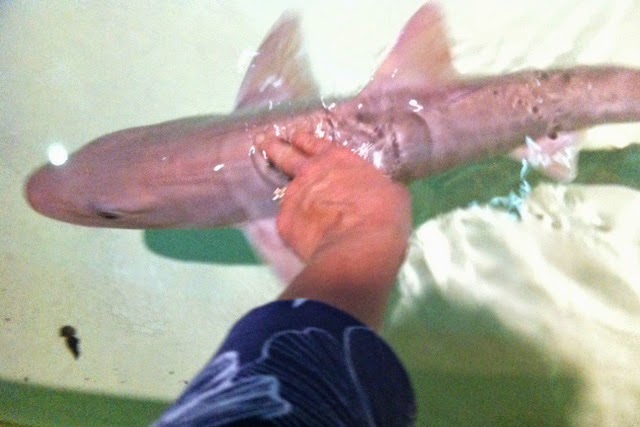 or just watch the sharks.  Whatever floats your boat. 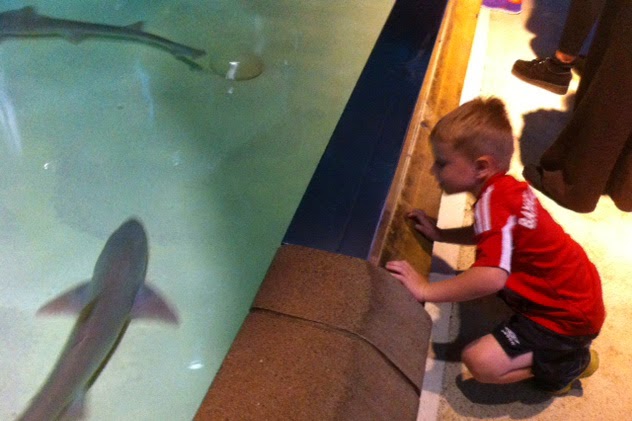 It's an awesome zoo.

After we saw the animals, we headed out to see some more of downtown.  I just love this city.  It's so pretty, there's so much to do, and it's all within walking distance.  You really, really should come spend some time here.  I'll be happy to show you around!

Don't be shy.  Let me know what you are appreciating this week!