I have never been more happy to see a Friday than I was this week.

In case you missed it, I had an emotional breakdown this week when my oldest turned 16 and my youngest started preschool.  I am completely shocked by my strong reaction, but it is what it is.  All of Tuesday, Wednesday, and Thursday, I was on the verge of tears if not already bawling.  Friday means NO PRESCHOOL! so I felt much happier and more myself with a 5 year old in the house all day.

Or out of the house all day. 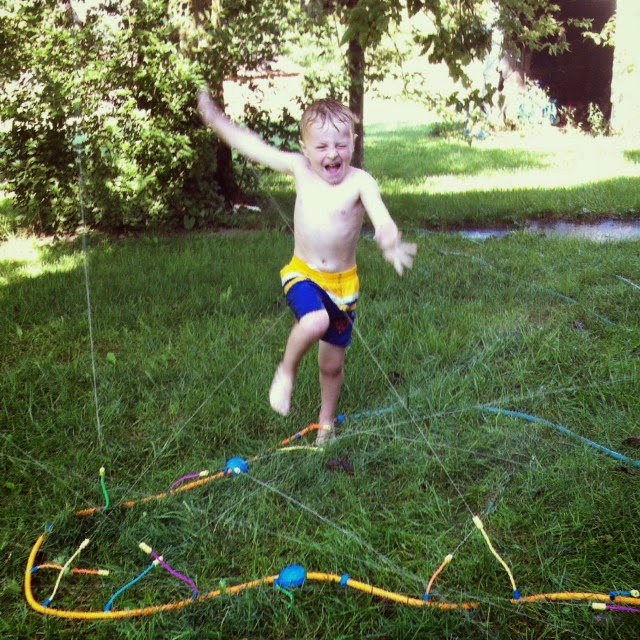 Be prepared, though, for next week.  At least this week I had appointments during his school time every day and never was home without him.  Next week will bring 9 whole hours of time I need to fill.  There will most likely be a relapse.

Despite my tears, there were plenty of things for which to be grateful.

1.  Cuckoo has had a great time in preschool.  He's surrounded by teachers who have known him since he was a baby.  Plus, he is in his element.  So many people to talk to!  (If I were to add up all the words my oldest five spoke to adults before they turned 5, it still wouldn't come close to the number Cuckoo has spoken.  Finally, FINALLY I have a social kid like me!)

2. Well, I just deleted four paragraphs of a story that I really need to make into its own post.  I'll just give you the punchline thankful for now.  My phone is fine.  I'll write the post another day.  (Along with the other 10 that are in my head because I have not yet written them.)

3.  Physical therapy is over.  Finally.  After 10 weeks (including pre- and post-surgery) of three days a week, I am beyond ready to be done.  I will still be doing exercises at home, though, as I'm not back to full range of motion.  I was told by the doctor that if I don't get my leg back to perfectly straight by the next appointment in 6 weeks, I will be getting put into a machine of torture to force it.  Yes, I will be doing my exercises.  And icing.  I've also been told that if the swelling doesn't go down, a needle will be used to suction the gunk out of my knee.  So yes, I will be applying ice to my knee several times a day.

4. Despite the scary consequences I was threatened with, my knee is healing nicely on the inside.  X-rays showed the tunnels they made during surgery have healed, and the metal buttons (The WHAT?  I didn't know I had metal in my leg until Wednesday.) holding my ACL in place haven't budged.

5. On Monday (Labor Day) we had a great visit with my brother and his family and our mom.  We ate, we laughed, we played kickball (Well, they.  I was only allowed to coach my niece who had no clue how to run bases.), we fought over brownie sundaes.  I really wish we lived closer together, but I'm glad it's not so far that we never get to see them.

6.  Star is on a new soccer team, and when we asked if it bothers him to see Instagram photos of his old team winning tournaments, he said, "No.  I'm having more fun that I did when I was on that team." We're all having more fun.  Plus, he can now once again (He had to skip last year because of the other team's rules.) be on the cross country team at school.

7.  Star and Giant had their first cross country meet and ran very well.  Cross country is my favorite sport to watch, so I'm glad they both get to (and want to) run.

8. Turken is a timid little boy in a 1st grade class full of wild and crazy boys.  It's not exactly what we'd call a perfect fit. I am so glad he has the one little boy he clicked with last year in his class again this year.  He's having a good school year.

9.  Phoenix has been struggling in school.  Last year was rough, and this year, despite some major changes in how we handle things and some real effort on his part, hasn't gone any better.  We are now working with his counselor and our pediatrician to figure out what is going on.  Thankfully, our high school is an unusual Catholic school in that it has a wonderful special needs staff and in-house services.  He will be able to use their services regardless of whether he has an official diagnosis or not.

10.  I saved the biggest thankful for last.  After a scary weekend in which Buttercup slept almost constantly and ate next to nothing, she woke up Tuesday feeling much better.  She has been symptom-free since Tuesday.  She got the all-clear from the doctor on Thursday to begin the 5 step process to get back to full, normal activity.  She's gotten through the first 2 steps without any relapse of symptoms, so we're quite hopeful that she has fully recovered.  She is crossing her fingers that she can play in her game on Wednesday.

So, did you break down when your youngest went to school?  When your oldest hit a milestone birthday?  When both IN A MERE TWO DAYS?

For what should you send up a great, big THANK YOU this week?

Pretty sure you know how this works by now.