We Avoided Puke but Not Body-Snatching, TToT Week 34

“Gratitude goes beyond the 'mine' and 'thine' and claims the truth that all of life is a pure gift. In the past I always thought of gratitude as a spontaneous response to the awareness of gifts received, but now I realize that gratitude can also be lived as a discipline. The discipline of gratitude is the explicit effort to acknowledge that all I am and have is given to me as a gift of love, a gift to be celebrated with joy.”

It hasn't been a normal week here at the coop.  Our house became a revolving door for a 24-hour illness.  Each day, one kid went down as one was getting up.  No vomiting, thank heavens, but fevers and headaches and sore throats took their toll.  I am the only one who hasn't gotten it.

To add to the oddness, the van has been having trouble starting in these cold temps.  The battery was corroding and dying and suffering greatly.  I have become quite adept at hunting down a borrowed working vehicle and hooking jumper cables to it.

Unfortunately, the snow and cold we are dealing with has become our normal.

1.  Honest people working in retail are still out there to be found.  I went to Auto Zone to get a new battery for the van, since they will install it after I purchase it.  The man came out to look at the dead battery and told me he didn't want to do it.  The battery and bolts were starting to corrode, and if they broke he wouldn't be able to fix it.  He suggested I go to the dealer or an actual mechanic to buy the battery and have it installed.  (Don't tell me it is company policy to only do easy, uncomplicated battery changes.  I'd rather be naive.)

2.  Our local Ford dealership has the ability to get me in quickly.  I called them Friday morning, asking for the very first available time, and he said, "Come in right now."  An hour after I called, the van was fixed and I was on my way to pick Turken up from kindergarten.

3.  For the first time in the 11 years I've been associated with our preschool, we are having a snow make-up day.   The mother of one of the preschoolers told her daughter about the make-up day.  After pondering it for a minute, the preschooler replied, "Well, I guess I'll wear blue eye shadow, since that's kinda like snow, and I'll wear red lipstick, because that's the color of cardinals..."

(Did you catch why that is so adorably hysterical?  A make-up day.  She's planning the make-up she's going to wear.)

4.  Wednesday was yet another day off of school thanks to the 7 or so inches of snow which fell overnight.  For this one, I was grateful.  It was Phoenix's day to be sick, and missing a day of high school is a Bad Idea.  The day off gave everyone a chance to sleep and relax and get all the germiness banished.  Plus, since I didn't have to do all the picking up and dropping off, I could stay home and wash the sheets of all the sick people in a single day.

5.  We can pay our heating bill and still have enough money for food.

6.  A lovely, helpful neighbor plowed our driveway for us on Thursday.  He couldn't get around the circle, since my van was there, but by plowing the long, straight portion of the drive, he saved COW and me lots and lots of work with the snow blower.

7.  I could go on and on about how wonderful my husband is, but I don't want to brag.  I'll just leave it at "COW is awesome."

8.  Two nights in a row we had an animal get into the chicken coop.  The only way we can figure it got in was by climbing a tree leaning on the back of the coop (You can see the tree in a couple of the redneck fence post pictures.), climbing over the roof, and prying the window out of the frame.

The first night we found the window lying on the ground on the outside of the coop.  One chicken was half-eaten inside the coop.

COW and Phoenix put chicken wire up over the windows, and we haven't lost any more chickens since.  The chicken which spent the night in the snow is back to her old self.


9.  Our tradition with the kids is to have a feast of party food while watching the Super Bowl.  When COW takes charge of the food, he heads to the store's freezer section and buys every box of crap he can find that the kids might like.  He also buys odd non-foods just for fun.  (I don't think Lizzi will ever be the same after seeing the photos of the spray cheese last year.)  I try to get less horrible choices in where I can. 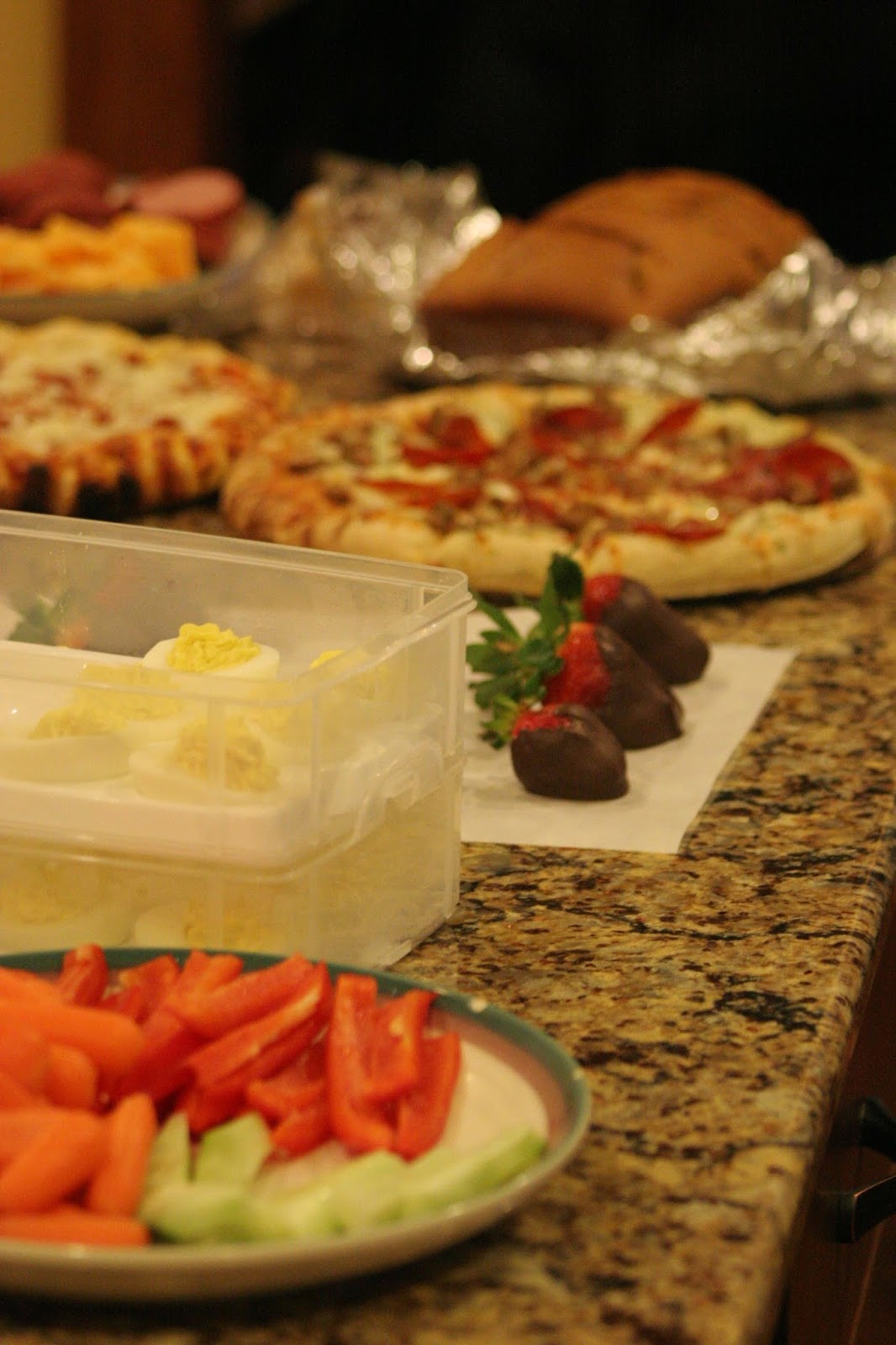 They had chicken nuggets, but they were the homemade, baked kind.  The strawberries were covered in chocolate.  The apples came with caramel dip.  The chips and queso was made with our homemade salsa.  The bags of chips were "natural" cheese puffs and veggie straws.  They all love banana bread and deviled eggs.  And because of all of these compromises, everyone was happy, and NOBODY PUKED!

10.  THE OLYMPICS HAVE BEGUN!!!!  I love, love, love watching the Olympics.  I love the stories behind the athletes.  I get teary every time they play our national anthem.  I'm in awe of the feats these athletes attempt.  (Honestly, those snowboarders are crazy!)  It's fun to be united as a country to root our athletes on.

How about those opening ceremonies???  FANTASTIC!!!  They were shooting for the biggest and best, and they delivered.  I loved the whole show.

Okie doke, it's your turn.  What gifts have you been given this week?