Extra! Extra! Read All About It! "It" Being a Bunch of Thoughts Spewing Forth

There's a group of ladies, led by Jen, who are doing 7 posts in 7 days.  When I first heard of it, my thought was, "How 'bout instead, we do ZERO posts in 7 days?"  I almost made that goal.

For reasons I shall explain later, I was given the opportunity to throw the to-do list into the "not now" pile to sit and write things down.  Prepare yourself.  I'm gonna be throwing all sorts of stuff at you today.  I thought about doing it in a clever way, with headlines and everything like a newspaper (thus the title), but, as everything else in my week, intentions don't translate into reality.

1.  Winter is the worst thing ever invented.  Our handy dandy weatherman put up a little graphic on the news last night showing how many degrees below normal it will be over the next few weeks.  I did not appreciate this.  I do not want to know that for days 6-10 it will be 23 degrees below normal.  I'm even less thrilled with the news that days 1-5 will be 18 degrees below normal.  Mostly because Phoenix's soccer team has an OUTDOOR SOCCER TOURNAMENT THIS WEEKEND!!!  Pray that no one gets frostbitten, would ya?

Aaaaaaand even better awful news is the big storm heading our way.  Mere hours after Phoenix finishes his last game, snow or ice will begin to fall from the sky, either blanketing our world with 8 inches of snow or pelting us with ice.  It will all depend on how many degrees below normal we happen to be Sunday night.

2.  Cuckoo puked on me this morning.  A cold is flying through the kids, and Cuckoo woke up 2 hours early with a stuffy nose.  He crawled on my lap just in time for the coughing to begin.  As is his habit, the coughing led to an upchuck of mucus.  All over my robe.  I feel I must repeat that.  HE THREW UP ALL OVER MY ROBE!!!!  My robe.  Which is worn for my every waking moment.  My robe.  The only thing allowing me to stay thawed out enough to fulfill my daily duties.  (Don't try to make me feel better by saying, "At least it wasn't in church!"  It won't make me feel better.)  I have to admit, the thought went through my head about whether I could just wipe the puke off with a towel, pretend it never happened, and continue to wear my robe.  The only reason I took it off is because I didn't want to tarnish the perfect June Cleaver image COW has of me if he came home to find me smelling like the compost bucket the kids never remember to rinse out.
So, the robe is in the washing machine while I huddle under a few blankets.  Since I can't move from my cocoon, Cuckoo is watching Wild Kratts, and I can regale you with all of this drivel.

3.  Star keeps offering me up to take one for the team.  He told his science teacher he would do not one, but both regional science fairs.  That was bad enough, but then he told the teacher in charge of his Imagine team (a group of kids who will present their idea to a board in March on how to help solve world hunger) that we could grow the seeds at our house.  Our house.  Which has trouble getting above 60 degrees this winter.  All day long, I'm moving the blasted flats around the house, trying to maximize their time in the sun.  I guess I should just be thankful that we have sun to begin with.

4.  How about some good news?  Phoenix made the high school volleyball team!!  He has never played volleyball before this year, and the only time was in PE class.  During the volleyball rotation, the teacher brought seniors who play volleyball down to play with the freshman.  A couple of them asked Phoenix if he was going to try out.  How could Phoenix not try out after being invited by upperclassmen?

During the open gyms before tryouts, it came to light that Phoenix has something no one else in the school has.

After years of messy handwriting, trouble with scissors and myriad other tasks, his left-handedness is coming in very handy.

Seems a lefty on a volleyball court is like an 8 ft giant on a basketball court.

Now, to learn the technical steps before their first scrimmage on Tuesday...

5.  In a span of one week, we will go from zero to 2 soccer refs in our house.  Phoenix took the class last weekend, and Buttercup will do so this weekend.  In Indiana, kids as young as 12 are allowed to ref, but we don't let our kids do it that early.  One, they don't know the game well enough to be confident enough to be in charge.  Two, soccer parents are crazy.  It's well-known that soccer parents are the worst type of parents.  Yes, there are some wonderful parents, but there are a huge number of crazy people who like to scream and yell.  We aren't about to put our 12 year old in that situation.  (I've had a post on this topic rolling around in my head for a while.  Once soccer starts, I'll probably write it.)

Reffing is a great job for teens to have.  During a tournament weekend, a kid can make almost $300.  The schedule fits their lifestyle, and they learn all sorts of helpful skills.  I'm mostly excited for them.

He wrote back, "I called but no one answered".

I immediately gave Star the evil eye and asked, "Did the phone ring while I was outside?"

He forgot that he doesn't have any phone numbers memorized, so he wouldn't recognize the number even if it was his dad calling.

Our follow-up lesson included instructions to Star to always answer the phone if I'm home and unable to answer it myself.  Aaaand Phoenix was praised for remembering to call, but reminded that in the future, he is to CONTINUE CALLING AND TEXTING UNTIL HE ACTUALLY REACHES SOMEONE!!!

7.  You know that minivan which shows up in all photos I take on the side of the house? 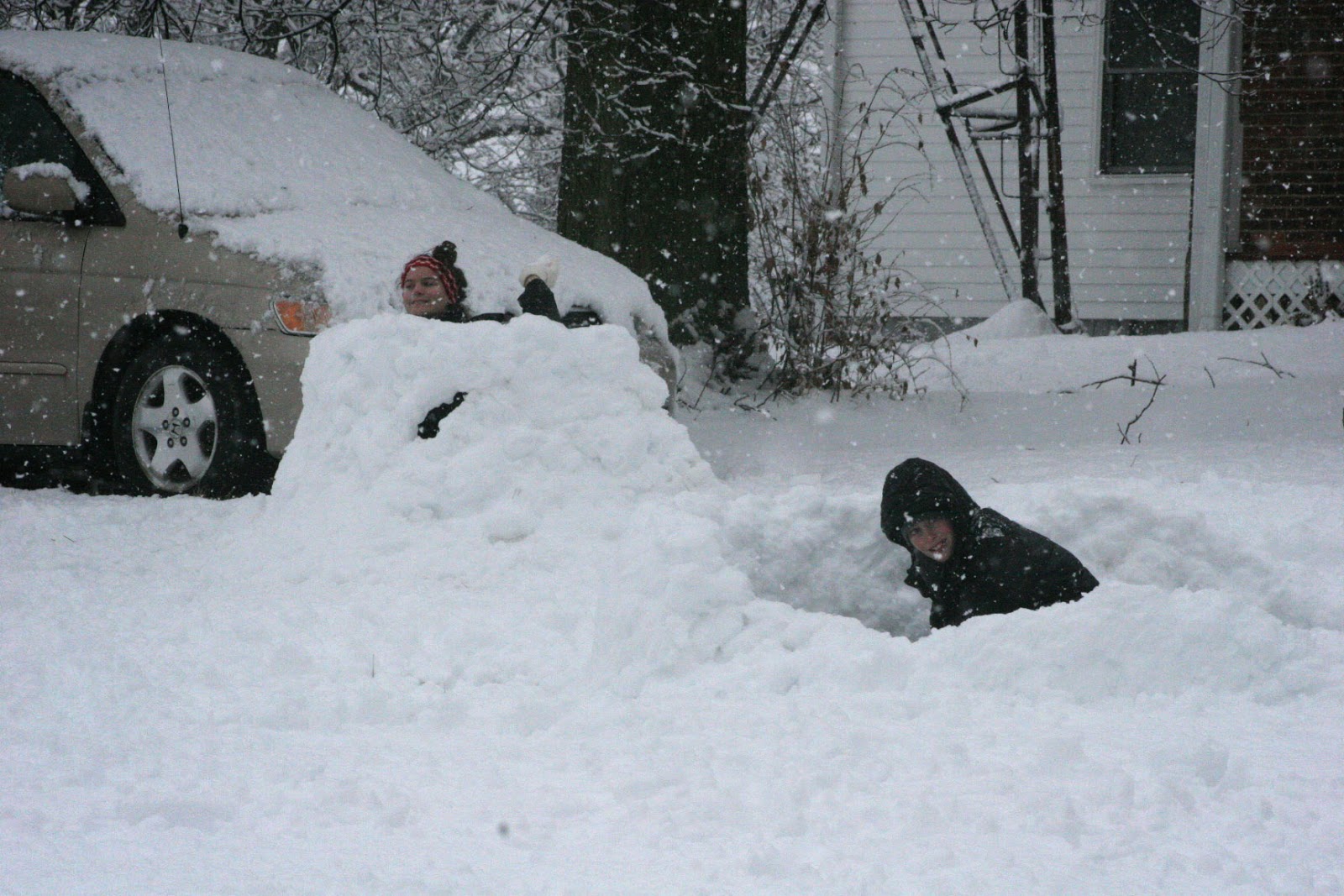 As of Friday, it will be gone.  My brother has 4 kids now, so he is looking for a minivan.  I happen to have a minivan which has had all of 10 miles put on it in the last 4 years.  I'll be a little less redneck, and he'll have a vehicle to fit his family.  Win-win.

Now to get the "I think a mouse family used the van for a home" smell out of it before Friday...

8.  Don't fear, we'll still be redneck.  Actually, Cuckoo is making me think we're closer to Honey Boo Boo than I thought.  Lately, he's found a new way to amuse himself.  Every once in while, he will press his rear end up to me and let it rip.  As in...there's no way to say this delicately...fart on me.  I never know it's coming.  The little boys love my robe as much as I do, so all day long I have kids pressing themselves into my legs (or back if I'm sitting down to play a game with someone else).  It doesn't register what he's doing until I hear and feel the reverberations.  This used to be accompanied with giggles galore from him, and admonishments from me of, "EW!  That's gross!"  A game, if you will.  Now, it's become just something to endure until he finds a new annoying way to amuse himself.  Press up against me, toot, walk away with nary a word or snicker.

9.  COW and I are planning a trip for our 20th anniversary this summer.  I was talking with a friend about how nervous I am about COW and I being on the same flight.  I actually told her I'd be more comfortable if COW and I were on separate flights, or if our entire family were on the plane together.

Yup.  I'd rather my children die in a fiery crash with me than grow up without COW and me.

I'm not just a little disturbed by this revelation.

Well, Wild Kratts is over, as is Curious George.  Cat in the Hat will be over before I get a shower if I don't get moving.

Thank you for sticking around and reading this mess of a post.  I haven't  the time for editing today, but I knew if I didn't put up a post, a few people (Dianne and Dad) may start thinking something was wrong.

Oh, wait.  Dianne and Dad are in Florida, living the warm high life.

I don't mean to imply Dianne and Dad know each other.  They don't.  Although, that would be funny if they ran into each other, started a conversation, and my dad said, "I have a daughter who writes a blog." and Dianne replied, "My favorite blog is A Fly on Our Chicken Coop Wall" and they had a whole conversation about us.

I shall see you again over the weekend for a 10 Things of Thankful post.