The Storm Cancelled Halloween, So Here's Some Highlights of Our Week

I'm linking up with Jen and the many other folks doing some quick takes.  I'm so predictable.

We had our big home soccer tournament last weekend.  11 games in 3 days, plus 4 volunteer shifts.  During one of the games Phoenix went to get something from the concession stand.  He came back with this: 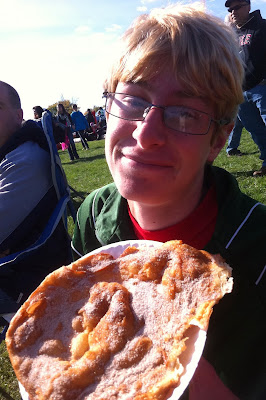 I immediately thought of Lizzi and our conversation last week about the US's obsession with all things fried.  There you go, Lizzi.  (And everyone else unfamiliar with fair food)  Behold the elephant ear.

He ate the entire thing.

In Star's last game of the tournament, he was playing an undefeated team for the championship trophy.  At halftime, we were up 1-0.  The other team wasn't really happy about it.  As the second half progressed, the opposing coach, parents and players got more and more vocal, and not in a good way.  The center ref was passing yellow cards out left and right, because kids were actually yelling things like "Are you blind?!?"  The attitudes went south, and the parents even started cheering when a player received yet another yellow card.

Our families and players were surprisingly calm and didn't say a word.  Until...

One opposing player was getting more and more upset, and at one point he purposely kicked the ball out of bounds (which players normally do in a regular game).  The problem is, he was only a couple of feet from the sidelines and he kicked it as hard as he could.  The ball hit a spectator right on the side of her face.

The refs stopped the game to check on the woman and talk with the boy.  No card was passed out, but the parents were mad.  One person actually yelled, "Oh, now we're not allowed to use any force when kicking the ball?"

One of our parents couldn't take it anymore.  He yelled back, "Hey!  He just hit an old lady in the head for no reason!"

One of the refs came over and told everyone to calm down and take a seat.

It was a horrible situation.  One of the worst I've ever seen on a soccer field.  Yet only one thought stuck in my head.

I leaned over to my friend standing next to me and said, "Wow, that poor woman probably isn't happy that he just called her old."

Cuckoo is convinced that Santa lives, not at the North Pole, but at COW's office.

Last Christmas time I dropped the five oldest kids off at his office so he could take them to a Christmas show.  Cuckoo and I went on a date of our own.  The next morning, the kids were talking about seeing Santa and sitting on his lap.  Ergo, Santa must live at COW's office.

Tuesday Cuckoo had a date with COW, so I dropped him off at the office.  COW actually had to take Cuckoo on a search for Santa, looking in every office they passed.  In one office, they found a man (one of the partners of the firm) in a white shirt and red tie.  COW immediately dubbed him "Elf" and told Cuckoo to tell the elf what he wanted for Christmas.

With a smirk, COW pulled rank and told "Elf", "Well, he wants your lamp.  Hand it over."

Everyone in the office is laughing about it, and I will not be surprised if Cuckoo receives that very lamp on Christmas morning.

For their date, COW and Cuckoo went to the opening Pacer's game.  (That's basketball for all you non-fans.)  Before the game even started, Cuckoo saw the cheerleaders.  I got a text from COW.

They got home well past his bedtime, but he had to tell me all about his evening.  At one point, COW prompted him to tell me about the cheerleaders.  Watch, and then I'll translate.  (Yes, that is me in the pink robe.  When it's cold, I wear two pairs of socks, PJ pants, a short-sleeved shirt, a long-sleeved shirt, and my robe.)

Cuckoo, embarrassed, whispered in my ear:  They were naked.
Me:  They were naked?
C:  No, it just looked like they all were.  They had underwear on.  And that thing you wear.
Me: *laugh*
C pulling at my shirt to show me:  That thing your wear under your shirt.
To the cheerleaders and all other women who go out in public so scantily clad, I'm begging you.  Put some clothes on.  Even a 4 year old knows that what you are wearing is inappropriate, and he is embarrassed for you.
************* 5 ***********

On Thursday (Yes, Halloween), we finally had time to pick out pumpkins to carve.  The wind was at a steady 35mph, everything was wet from earlier rains, and there was a bit of spitting rain as we looked for someplace to buy pumpkins.

The farmers' stands were all closed, thanks to the weather.  Grocery stores had already taken their pumpkin displays down.  We parked at our last grocery store option, and I told Buttercup to go scout it out before we all got out of the car.  (She is most trustworthy in such situations.)

She got back in the van and said, "Well, I saw one boy carrying a pumpkin out, so they must be there somewhere.  I didn't see them."

I told everyone we were going in when Buttercup continued.  "This is going to be just like those people who wait until Christmas Eve to get their trees and come home with the tiniest, spindly tree because that's all that's left."

As I laughed at her analogy (because I was afraid she was right) she then said, "Why don't we go there?" and pointed across the street.

We drive this road approximately 500 times each week, yet I completely forgot about the place across the street.  It is a freakin' farm with a corn maze, hay bales, and gobs of pumpkins.  AND an indoor place to pay.  They were totally open.

So, we got back in the van and went across the street to buy some pumpkins.

We chose, we paid, we loaded into the van.

I realized we didn't get any photos.

Four kids were good sports and got out to re-enacted some pumpkin choosing. 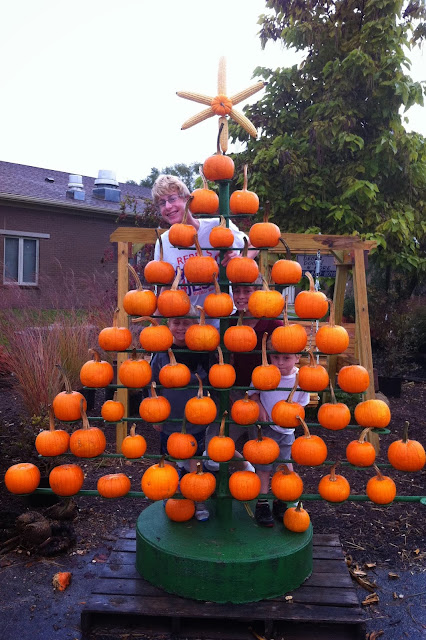 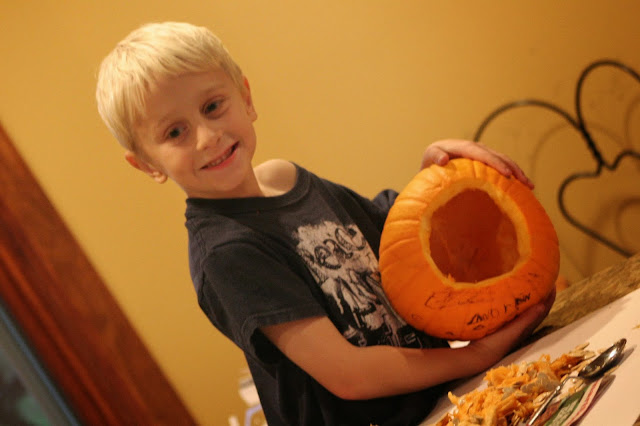 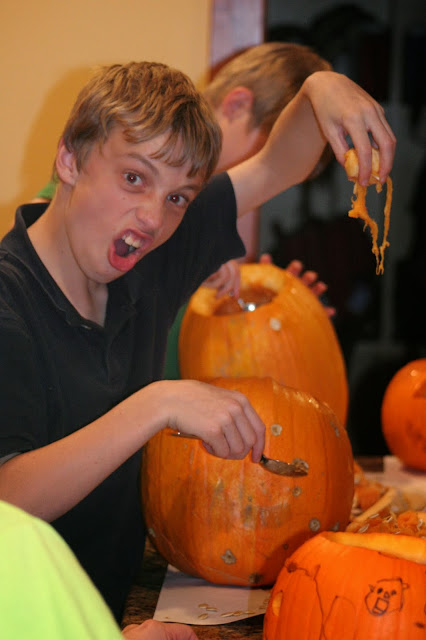 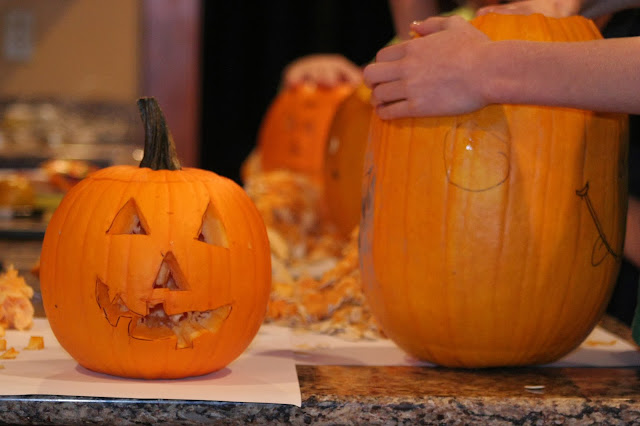 I've bored you enough.  Hopefully I'll see you this weekend at the TToT hop!