Joining Jen for some quick takes.

Normally in October, the leaves fall and cover up all the detritus around the yard we want to ignore for several months.  It's a lovely deal we have going.

This year, though, the falling leaves actually uncovered something we did not want to see, 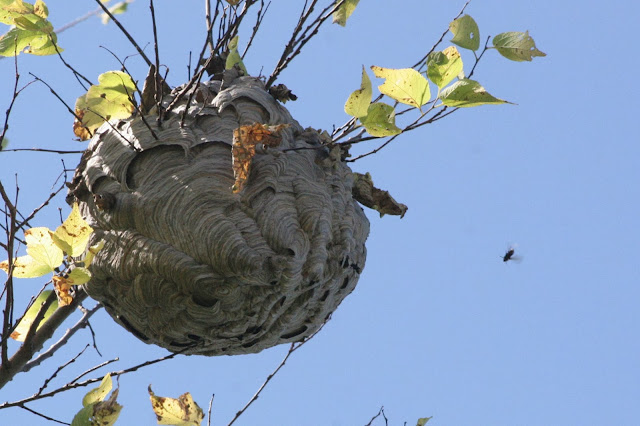 especially not 100 yards from my front door.  The sight of a constant steam of bees flying in and out of that hive wasn't exactly appreciated, either.

With the kids' voices (discussing a possible reenactment of The Hunger Games trackerjack scene) still in my head, I googled "how to move a bee hive".  Know that I had no intention of moving it myself.  I simply wanted to know how to, and more importantly who could, move it.  I may do a lot of things around here, but moving a bee hive is not one of them.

In my 5 minutes of research, I learned that this is not, in fact, a bee hive, but a "paper wasp nest".

I thought a beehive in my front yard was bad.  I was wrong.  Wasp is much worse.  Unlike bees, wasps can sting over and over again.  Plus, there's no such thing as a "waspkeeper" to come and take my nest away.  I'm stuck with it, unless I want to climb up and spray the entire thing with wasp killer.  Yes, I can hear you, Dear Reader, egging me on to do it, because wouldn't that make an awesome post!?!?  Yes.  Yes it would.  While I do love you and appreciate your support of my blog, I do not love you that much.

For one brief second I did consider killing the wasps, but I came to my senses.  We have unknowingly lived with this thing since spring (so says my research) without getting stung.  Plus, the colony won't be here much longer anyway.  I'm told (through my research) every one of those wasps, minus the queen, will die come winter.  Miss Queen Wasp will be taking a long winter's nap, then start a new nest somewhere else come spring.

Until that happens, you will find us playing in the back yard.

We're in the throes of phonics and spelling these days.  Not because I chose it.  If it were up to me, I'd wait until Cuckoo's and Turken's speech was a bit better.  I don't get to choose, though.  They want to learn. Consequently, we have conversations like this all day long:

Turken:  No, you make the sound wif your froat, not your teef.

Me:  Hey, anyone want to play Dominoes?

Did you all notice my new photo avatar thing-a-ma-bob?  Buttercup took it for me.

After 8 months or so, I finally had a few moments to get myself a haircut.

The hairdresser and I had a nice, long talk.

Me:  I want my hair, when dry, to hit at my chin.  Not jaw.  Chin.
Her:  Like a bob?
Me:  That length, but with layers.  Lots of layers.
Her:  Long layers?
Me:  No, the top layer should be pretty short.  I don't want to be able to put my hair in a ponytail.
Her:  (measuring with her comb)  Five inches?
Me:  Yes.
Her:  Bangs?
Me:  Yes, that sweep to the side and land at the bottom of my eye.
Her:  I appreciate people who know their hair and what looks best on them.  It's much better than me telling you, since I just met you and your hair.

We were on the same page.  Same wavelength.  Talking the same language.  Simpatico, even.

Until she betrayed me.

And gave me a curly mullet.

Because, clearly, I have done something horribly unforgiveable to Fate, and she believes in revenge.

A mom, a grandma, a toddler, and a small baby were at the same park as us last week.  (As I reread that, I see it totally sounds like I should have ended that with a "walks into a bar" joke.) The grandma was in charge of staying with the baby in the stroller, while the mom followed her toddler all over the playground.  When I say she followed him, I mean she literally followed him.  Through the tunnels, down the slides, up the steps.  She even followed him down the climbing mountain thing, but instead of just following him, she held his hand while she tried to maneuver her way down.  It was quite precarious.  The poor boy was dangling by one arm, trying desperately to get his feet down on the little steps, while she slowly teetered down.

She did not do this once, but several times.

Why do I tell you this?

Because it drove me crazy!!!  It was a week ago, and I am still thinking about her.

I soooo wanted to stop her and tell her to keep her feet on the ground.  Instead of following him on the playground, where she can't move nearly as fast as he can, (because the tunnels were made for kids) and wouldn't be able to stop him if he did get too close to an opening, she should stay off of the playground and firmly planted in the mulch below.  Be at the opening, where there is the slight chance of him falling, so she can catch him.  And when he gets to the wall, teach him how to climb down.

I so often see parents who simply don't give their kids enough credit.  I have worked with kids for 30 years, and by and large, two year olds are capable of learning plenty of things.  They want to learn new things.  They want to be big kids.  We should encourage it, not squash it. I'm not saying parents should send their toddlers off to explore while the parents sit on the bench.  I'm saying parents should try to teach their young kids how to do things, then stand nearby.  Parents should be in position to actually help the kids, not stumble over them as they try to keep the kids safe. Kids are safer when they are taught how to maneuver, not when their parents maneuver for them.

(After that, you probably won't be surprised to hear that I am against the general use of baby gates on stairs.)

I'm thinking she may have punched me if I said all this to her.  Or perhaps she would have written her own blog post/facebook status update about the witch know-it-all at the playground.

And for a little blog business...

If I comment on your blog, and you see a bracket at the beginning of my comment, ignore it.  I seem to have a stuck button on my keyboard, and every time I start typing, it puts a bracket.  Every once in a while, it will stay stuck and keep typing, like thiiiiiiiiiiiiiiiiiiiiiiiiiiiiiis, except the bracket and not a letter, until I yell "NOOO!!! and punch the "back" key to beat the bracket back.
Problem is, I cannot find this particular bracket on my keyboard to unstick it.  All I can figure is it's one of those mysterious keys on the top of the keyboard.  You know, the F keys with clip art on top.  Does anyone actually know why those keys come with our keyboards?

Anyway, sorry for the random brackets.  I'm tired of going back and deleting them, so you're just going to have to live with them.

} (Look!  There's one of the crazy brackets I just told you about!)

A remake of the movie "Carrie" is coming out this weekend.

I don't know about you, but that movie has a special place in my heart.

Yes, I realize it is a terrible horror flick, but it is the movie COW and I saw on our first date.  Neither of us had a driver's license yet, so we went on a double date with COW's good friend and the friend's girlfriend.  The date started at a pizza place, where, in the restroom, the girlfriend told me COW's friend was a jerk, and she was going to be breaking up with him.  The date only got better when we then went to the friend's house to watch a movie.  His parents weren't home, so I had to lie to my dad during my check-in call.  "Sure, Dad, they're here.  Popping us some popcorn as I talk!"  Everyone took his seat for the movie.  Jerk Friend sat in the recliner, Jerk's girlfriend sat in a rocking chair, which left the couch for COW and me.  The movie started, (I had never heard of it.) and the first scene is of a girl who got her period for the first time being bullied by a bunch of mean girls in the locker room.  As the movie went on, Jerk's girlfriend angrily rocked in that rocking chair, and by the end, the chair had skootched practically all the way out of the room.

Remarkable, really, that we ever went on a second date.

And 26 years, 6 kids later, the movie is back.  I wonder where Jerk and his girlfriend are and if they will be seeing the movie.

Speaking of 'versaries, Wednesday was exactly the three year anniversary of my first blog post.  I wrote for about 6 months, didn't really enjoy it, so gave it up for Lent.  Then two years ago, I jumped back in.  I changed my attitude and expectations, and haven't looked back.

I've seen that lots of people do something special on their "blogiversary", like a big giveaway.  I just did my first "giveaway" a few weeks ago, so I don't see that happening.  Sometimes bloggers do a big "about me" post.  I've been trying to come up with an idea for a new "about" page for weeks, but can't come up with a doggone thing.  So that "about me" post is out.

I guess all you get is a "Hey!  It's my blogiversary!"

There are lots more (and better) quick takes over at Conversion Diary.  I'm sure Jen would be thrilled if you went and took a look.