Linking with the ladies again today (Kate and Jen).

Our FTSF sentence this week is...

I wasn't really myself when I...

My brother is going to love that I am finally admitting to this.

I wasn't really myself when I was learning how to drive a manual transmission.  (Is that the scientific name for stick-shift?)

I was living with my mom for one college summer break, and the only vehicle for me to use to get to work was her old pick-up.  In order to drive it, I needed to learn how to drive stick.

My mom took me out, and I had the basics down.  We spent a good long time working on hills, as I was quite nervous about them.  In the end, I was passable, and there were no hills on my way to work.

One day, my brother (five years younger than me) was with me when I stopped at the grocery store.  Driving out of the parking lot, we got stopped at the light.  The light was at the top of a short yet very steep hill.  As we sat there, I got nervous.

At first, it wasn't too bad.  No one was behind me, so if I rolled back before getting my feet to do what they needed to do in order to get us going forward, no big deal.

But then someone pulled up behind us.  He pulled up so close I could no longer see the front of the guy's car.

I kindly asked my brother to get out of the car and ask the driver to back up a bit.

I not-so-kindly told my brother that he really, really needed to get out and ask the guy behind us to back up.

Not just a little.

My heart was pounding, I was so scared I would be unable to get the car moving forward before I rolled back right into that stupid car behind me.  I don't know why I was so worked up about it, but I was.

Oh, was I worked up.

I cussed up a blue streak, pulling out the F and the D and every other cuss word I ever heard and flung them at my brother to convince him to get his butt out of the car and tell the guy to BACK UP!

After giving me a look that showed me I had lost my mind completely and utterly, he refused again.

I had never been so mad at another human being.

The light turned green, and in my fury, I hit the pedals with such force, we went bolting forward, practically knocking my truck into the car in front of us.

I yelled at my brother the entire way home.

He chastised me for expecting him to talk to the guy, but mostly he chastised me for cussing.  By this time, he had become Mormon and reformed his ways.  He was completely offended by my use of such foul language.

It was the one and only time I have ever said the words that came out of my mouth that day.

It was the one and only time I have ever panicked to such a degree.

My brother will never let me live it down.  As a matter of fact, he just brought it up at our August 10th 4th of July party.

Fortunately, our family came up with a signal this year.  Anytime someone started telling a story we had heard one too many times, someone could raise her hand to make the person stop telling the story.  I totally raised my hand the second he brought up the pick-up truck.

As COW was heading to bed, something on our pink chair caught his eye.


He got a little closer, than jumped back, saying, "I think there is a bat in the chair."

Me:  "You mean the glove sitting on the chair?"  (Now that I see this photo, it's clearly not a glove.  I have no idea what it is.)

What happened next pleased me beyond reason.  While I stood there taking photos, COW actually took care of the bat all by himself.  If you don't know why that pleased me so much, you may want to read about the time I discovered COW is petrified of bats.  (It was early on in my blog, so the writing is not the high quality you have come to expect from me.  (Ha! (But really, the writing is bad.)))

On Monday, the worst two years of Phoenix's life began.  He is now the unhappy wearer of a full set of braces.  After my own nightmarish orthodontist, I put the day off as long as possible.  Probably should have thought it through, though.  Getting braces on a Monday of the second week of school at the start of his first soccer season in high school probably wasn't the best idea I've ever had.

He's not exactly happy with me.

But he'll still cheese for a photo for me.  Such a good boy... 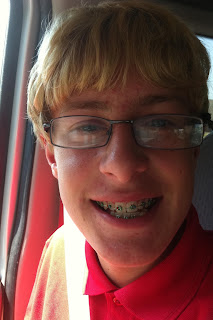 ************** 4 ***********
Warning: Proud, gushing mom moment.
Speaking of Phoenix playing soccer, I told you on Saturday about the high school soccer tryout debacle in which he was cut, then a whole week later asked to be on the team.  This week, they have had two games, each game being 90 minutes.  Phoenix is the only player who has not spent one single minute on the bench.  I couldn't be more happy for him.

They refuse to go out, even when I tempt them with fruit.

So, we have resorted to shooing.  No pen of mine is going to go unused!

The first day, I cornered them in the room by the door, then moved in.  Chickens went flying, squawking their full heads off.  But, since there are 30 of them, a few had no choice but to go outside.

I brought in some help and scared even more out.

Since then, Cuckoo and I have gone out each morning for the shooing of the chickens.  It's to the point where some have even figured the routine out.  As soon as they see us, they head for the door.   Today, we managed to get all but 4 outside.

Of course, within 10 minutes of our leaving, they head back inside.

They are just lucky I have things to do.  Otherwise, I'd be planted right there next to the door, making them stay outside and enjoy the sunshine and the bug eating and the perfectly safe zone COW and I created for them.

I have a new favorite phrase.  COW was telling me of a co-worker's sister-in-law who has moved in with his family.  Apparently, she has no job and no inclination to find one.  In the explanation, he called her a "never-do-good".

I immediately stopped him.  "Did you just say never-do-good?"

Yes, yes he did.  Bless his heart.

In this house, we will forevermore call "a person who is ineffectual, unsuccessful, or completely lacking in merit" a never-do-good.

Which means once a year.  Does anyone ever even say "ne'er-do-well" anymore?

The birthday boy, in photos: