He's Not the Worst Cook in America

For the five years before Hubby and I walked down the aisle to proclaim, "I do!" we lived in separate states. We went to different colleges, and he was a year ahead of me, so our actual time together was limited. We didn't really know too much about each other's habits and ways of living.  But, both being the oldest children of divorced parents, we went into marriage very logical-like.  On our honeymoon we actually discussed the chore breakdown for our household.  The rules started the first day we got home.  A few of those rules have lasted all of these 18 years, and one has been used every day of our married lives.

When one person cooks dinner, the other one cleans the dishes.

When I married Hubby, the man thought that 3 pounds of ham was a complete meal.  I knew that if I wanted to eat like a normal human being, I would have to be the one to cook, and he had to be the one to clean the dishes.  This arrangement has worked out well for us all of these years.

When I left to take Buttercup to a volleyball game, I told Hubby to take whatever he wanted out of the freezer for dinner.  I would make it after the game.  When I got home, he had pork tenderloin chops thawing and a plan for how to make them.

Me:  Where did you learn how to make pork chops?
H (after some denials and diversions): allrecipes.com
Me:  Are you making the entire meal or just the pork?
H:  If you feel you need potatoes, I wouldn't object.  Or if you have a hankerin' for a green veggie, be my guest.

I give you Hubby's exact method for making breaded pork tenderloin.  The crossed out directions are the ones he did first, then amended later.

1.  Use a tenderizer hammer thing to pound out your pork tenderloin.  Make sure you put the tenderloin on a large, plastic cutting board. 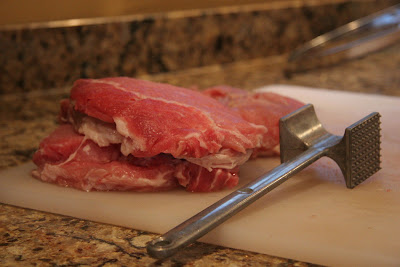 Buttercup (who was standing nearby): Dad!  You just splashed me with pork blood!

1a.  Make sure you cover the pork with plastic before you pound it.

Me:  Honey, is there a reason you need to put the pork on the cutting board?
H:  I don't want to break the counter.
Me:  First of all, the counter is stone, you won't hurt it, and second of all, do you actually miss the pork when you swing at it?

1. Wrap your pork chop in plastic wrap and pound it out with a tenderizer hammer thing.

3.  Put eggs and milk in one shallow pan, bread crumbs and seasoning in another.

4.  Pour every drop of oil you have into a big pan and heat it up.

Me:  Honey, are you supposed to be deep-frying the pork?
H:  I am supposed to brown it in oil.  How do I know when the oil is hot enough?
Me:  Let's go back to the amount of oil.  Deep-frying isn't usually a good thing to do in a 12-in. frying pan.  Are you sure you have the right amount of oil?
H (checking his phone):   Um, no.  I didn't see that part in the ingredients.  I'm supposed to use one tablespoon.  How in the world does that work?  Now what?
Me:  Let the oil cool and then pour it out.
H:  But I need the pan!
Me:  How 'bout you put the oil in something to cool?  And back to your other question, you are simply browning it.   The oil is only supposed to coat the bottom of the pan. 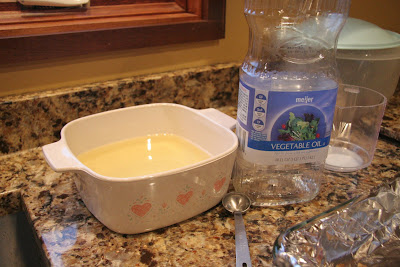 4.  Read the list of ingredients and all directions before you begin.

5.  Once your one tablespoon of oil is hot, dip a chop in the egg, dredge it in the bread crumbs, then place it in the pan to brown. 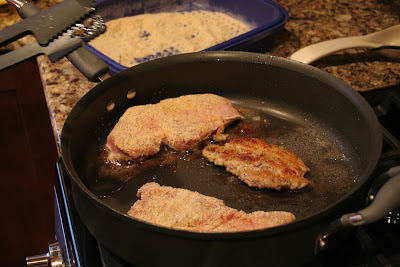 6.  Check the chops often to make sure the chops are browning, not burning.

Me:  Honey, quit touching them.  They won't brown correctly if you keep fussing with them.
H:  Then how will I know if they're brown?
Me:  It will take more than 25 seconds.  Give them at least 2 minutes.
H:  Should I cover them?
Me:  Does the recipe say to cover them?
H:  No.
Me:  Then don't cover them.

6.  Flip the chops after a few minutes (when the first side is brown).  Once they are browned completely, take them out and put them...

in a pan or two lined with foil.

7.  If you forget to do the egg/bread crumb thing, pretend that you did it on purpose in case someone doesn't like breading. 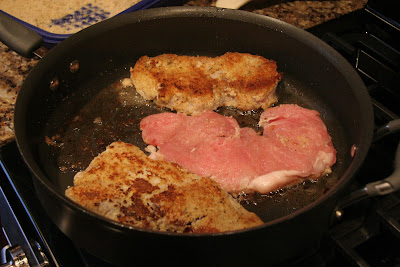 2.  On the oven, set the temperature to 350, then PUSH START to get it to actually heat up.

8.  Once all of the pork is done and in the foil-lined 9x13 pan, mix the leftover egg and bread crumbs.  Fry them up.  This, according to my recipe, is called extra breading.  I call it scrambled eggs with a little bit of filler. 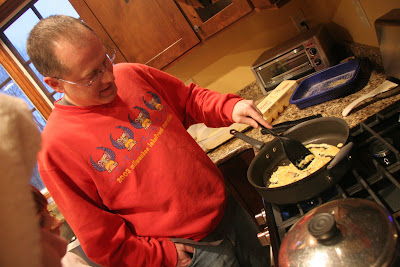 9.  Throw the eggs on top of the pork chops, 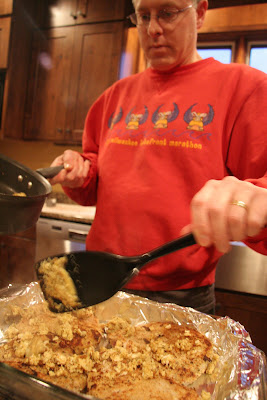 then cover the whole thing with foil.

10.  While the pork is baking, do something with that oil you didn't need. 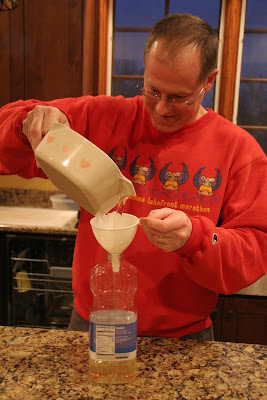 9.  When the pork reaches the proper temperature, remove from oven and enjoy. 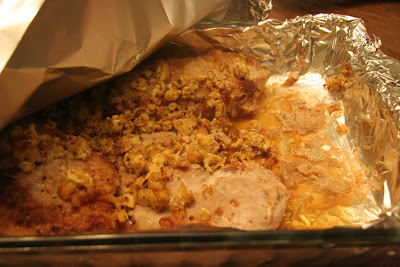 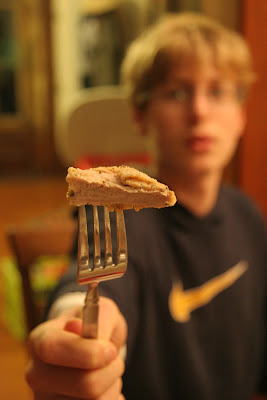 We enjoyed.  The chops he pounded thin enough were delicious.  There were a few that were too thick and not quite right.

As I am writing this, Buttercup is making some cookies to take to school tomorrow.  She just came into the room and said, "The recipe says I need one and three fourths eggs.  How do I do that?"

Probably not a good time to pull out the "ask your father" card.