Joining Jen again with some takes that are quick.  For real this time.

At dinner the other evening, the sound of passing gas broke through the chatting.  Cuckoo sheepishly raised two fingers and said, "I tooted."

One of the big kids must not have heard and asked, "What?"

Cuckoo held up three fingers and said, "I threeted."

Cuckoo is now a full-fledged, card-carrying member of the He-Man Woman Haters Club.

I took the kids to a wonderfully historic ice cream parlor today.

(Just curious, did I use that hashtag correctly?  I've never tweeted in my life, but I want to give folks the illusion that I'm cool.)

This next take happened more than a week ago, before the foot injury, but I kept forgetting to write it down.

Me to Hubby: I know you won't believe me, but I've actually had the urge to go for a run a couple of times lately.

Hubby's response: A run to the bathroom? I do that several times a day. It's called getting old.

People who do landscaping for a living should have a gorgeous yard.  Folks who paint houses should have a house free of peeling paint.  It's just good marketing.   Clearly, this guy didn't get the memo. 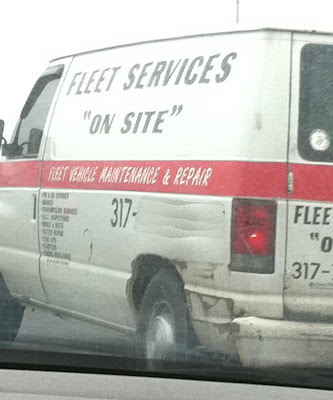 Unfortunately, we were going 60 mph on a freeway, Buttercup was taking the photo, and we were two lanes away from the van.  I reeeeeeally wished she would have gotten the back of the van in the frame.  This take would have been a whole lot funnier.

We are in period of transition.  Three pizzas aren't enough to feed our family, but four are too many.  We got four last time (each a different kind), so there were some leftovers, which we consolidated into two boxes.  I saw Hubby writing on the boxes, and I said to him, "Aren't you smart, labeling the boxes?"

He spoke not a word.

The next day, I found this in the fridge: 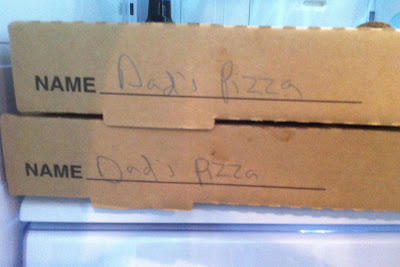 On his headstone, it will read, "He was helpful."

On Saturday, Buttercup, her friend, and I got to spend many long hours at the regional science fair.

I hate science fair projects, for many, many reasons we won't go into now.  Let's just say, I'd rather pluck every single hair off of my entire body (I've given birth to five boys, which filled me with lots of testosterone.  There is a lot of hair growing in lots of odd places. (That probably went too far into TMI, didn't it?  (I needed to make a point.  You'll live.))) than spend many hours at a science fair.

The girls didn't seem to appreciate my generosity in agreeing to take them.  Their body language seemed to be saying, "I do not want to be here."   The feeling was confirmed when they said, "Do we really have to stay here?"

If I am spending many hours doing something I don't want to do for my child, my child better be thrilled with whatever it is we are doing. 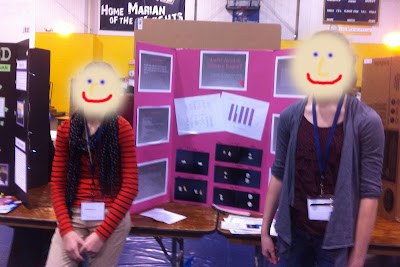 (Buttercup may be kinda, sorta, probably mortified when she sees this.  Her friend will be cracking up.)