I went to write my post, and quick takes were going through my head.  I went with it.  Pretend it's Friday.

For those of you who do not have the opportunity to live with growing boys, here is a little glimpse into the life:

At dinner the other night, one of the boys let loose with a loud burp, then continued to shovel food into his face.  When he looked up, he saw that I was giving him the look that shouts, "Really?"

He responded (with a mouthful of food), "What?"

I said, "Next time, keep your mouth closed and say excuse me."

Then I silently prayed that none of them caught it.

A full 30 seconds later, Phoenix, with a gleam in his eyes, opened his mouth nice and wide to give a boisterous burp.  He immediately clamped his mouth shut to say, "Excuse me."

Of course he caught it.  He always catches my misspeaks.

If you have not seen this adorable child yet, watch the video.

We now have a new phrase in our house.  Every time someone doesn't like what another has done, he yells, "Not cool, Robert Frost!"

The definition of irony:

Yesterday, Buttercup was wanting to download something on the computer, and was unhappy that I was making her do her homework and chores first.  These words actually came out of my mouth:

Probably would have packed a bigger punch if I wasn't sitting on the couch reading a blog while clothes were waiting to be folded and a kitchen floor was waiting to be scrubbed.

Fun Dip should be banned from Valentine's Day. 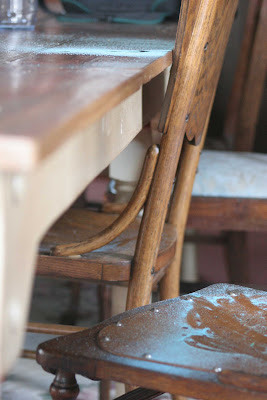 Buttercup had a late-ish volleyball game, so on the way home I asked her to call Dad and ask him to put some water on to make pasta for dinner.  He did, and when the boys asked what we were having, he told them, "pasta".

When I got home to a boiling pot of water, I went to the pantry and discovered that we didn't actually have any pasta to make.

Plan B:  grab some pre-cooked ground meat from the freezer, a couple of jars of our homegrown, canned tomatoes, and a can of chili beans and make some quick chili.  Throw together some grilled cheese, cut up some apples, and dinner was served.

Some of our children are not big fans of chili, but were determined to eat it, knowing the kids' PE teacher had given us a big bowl of Death by Chocolate for dessert.  As Cuckoo choked down his third bite, he said, in a menacing, well-enunciated way, "Why. didn't. you. make. pasta?" 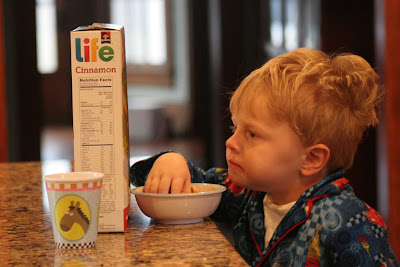 Almost looks like he can actually read.  He can't.  But he has to have the RED box to "read" when he eats his cereal.

Cuckoo may not be able to read, but the boy can draw.  He's into drawing snow men lately. 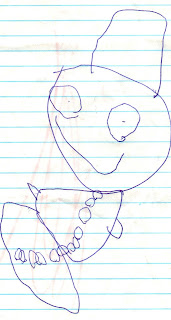 Have a lovely day, even if it is raining all the live-long day.