Monday Listicles - Is It the Thought That Counts?

Gotta tell ya, I didn't think there were worse things than political ads before an election.  But there are.  (Every kiss begins with) Kay and (He went to) Jared commercials before Valentine's Day are just gag me with a spoon bad.

Fortunately, we have a wicked fun Monday Listicle this week to take our minds off of them.

Ten OH, NO YOU DIDN'T gifts

The first five will be gifts that, thankfully, Hubby has avoided.  (Mostly because he learned from the mistakes of my relatives.)  The second five are things actually done by my dear, dear husband.  By the end, you will be shocked that I am still married to him.

10.  The expensive, predictable gift.  I've said it before and I'll say it again.  Don't buy roses on Valentine's Day.   Just don't do it.  Roses in June are lovely.  Roses on Feb. 14, when they cost 5 times their normal price, irritate me.  And it's not even original.

9.  Stuffed animals.  Once a girl passes the age of 5, just don't do it.  Hubby has not made this mistake, but my dad did.  When I turned 10, he gave me a stuffed bear and a stuffed carrot.  Kid you not. 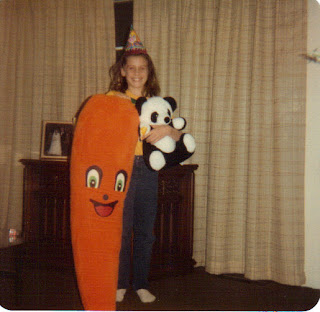 8.  Coupons.  You know, those handmade ones that say things like "I'll do the dishes" or "a foot massage".  It's cute when my kids give them to me, especially when they say things like "peace and quiet from me for one hour".   Regardless of who gives them, I'm never going to redeem them.  It's really a non-gift.

I'm just saying, you darn well be doing dishes and giving foot massages without me having to cash in a coupon to make you do it.

7.   Clothes with animals or cartoon characters on them.  This goes along with #7.  When I was 17, my dad gave me a purple sweatshirt with a shiny cat on it.  Came with matching shiny cat earrings, too.  I am not a child.  My bosom may be small, but cute cuddly kittens do not belong on it.  (A note to the three men who read this:  Even if your wife/girlfriend would like a shirt like that, don't get it.  Save her from herself.)

6.  A Chia pet.  My youngest brother gave me one once, because he buys things he really wants for himself, then gives them to people.  Usually with the statement, "If you don't want it, I'll take it."  He's a bit immature that way.  Even the funny Chia pets that look like people with an afro should not be given.  (Unless you are at a party in which gag gifts are exchanged.  Then it is completely acceptable.)

Really, I'm not wanting any sort of plant.  I will forget to water it until it is drooping from dehydration.  So I water it and watch it come back to life.  And then I don't water it.  It starts to droop.  Eventually I will get very tired of this plant dance we have going on and just toss it into the compost.  No need to do that to either me or the harmless, innocent plant.

Do I sound a touch ungrateful yet?  Just wait.  It's time for the gifts my husband has actually given.

Before I throw him under the proverbial bus, I must show you how good he can be.  The potential he has failed to live up to.

Too bad for him, the first gift my husband ever bought for me set the bar way too high. We were 16 years old. He went to three different jewelry stores in town to find a necklace that matched my eyes. He finally found the one he wanted; a gorgeous blue topaz pendant on a gold chain. Undeterred by the fact that it cost more money than he had, he went to the salesperson. My dear boyfriend emptied his (Velcro) wallet onto the counter, told the man that this was every dime he had, and could he please have that necklace. The salesperson took pity on him and let him have it.

Now that you adore my husband, I can get to the list.

5.  One year he mistakenly put off his Christmas shopping.  At 8:00 on Christmas Eve he went to Meijer (What do you get when you cross a Wal-Mart and a Target?  Meijer.) and purchased all of my gifts and stocking items.  I got a Farmer's Almanac for Christmas.   Clearly he forgot that I'm not a real farmer, but simply play one on TV.

4.  One year, when we had four young, young children, he got me/us a package of dance lessons.   He had the beginning of a good thought, seeing as how we had taken dance lessons before we had kids (as in, I was very pregnant with Phoenix) and had lots of fun.  The only problem was, he didn't think farther.  Who, I ask, was going to get a sitter lined up for each and every dance lesson?  Who, I ask, was going to get the kids fed and all ready for that babysitter?  That would be me.   It was just such a pain in the neck to actually get to the lessons, so we only used three of the seven allotted to us.  (Fortunately, he used this experience to learn something.  The next time he got me lessons, it was for a photography/darkroom class I got to attend all on my own while he stayed home with the kids.)

3.    For my 30th birthday, he gave me what woulda, coulda been the perfect gift; plane tickets to NYC with the sole purpose of seeing as many Broadway shows as we could fit into three days.  Awesome idea. Except we had children.  Children aged 2,1, and 5 months.  Children I had never left before except when I was in the hospital to deliver one of them.

While Hubby did think far enough ahead to schedule a person to watch the kids, it was his mother.  After her stints at watching them while I was in the hospital delivering babies, I was not exactly confident that she would be able to handle the three of them herself.   We'll leave it at that.

While his choice in sitter for my first time away was difficult enough for me, there was one bigger problem.  I WAS STILL EXCLUSIVELY NURSING THE BABY! Star had never set lips on a bottle when I got this wonderful gift. He was still nursing twice at night. The gift meant I had to wean him. He did not want to be weaned. We'll leave it at that.

While we did go on that trip, he was told in no uncertain terms to never, ever do that to me again.

2.  If you are a long-time reader, you might remember the compost bucket we had in our old kitchen.  The Meijer gallon ice cream bucket.  It was nasty, but it worked.  And it could be replaced each time we finished a gallon of ice cream.

Well, one year Hubby thought I might want a nicer compost bucket.  One Christmas, he gave me a lovely ceramic one.  Two problems.

One, we had an ugly kitchen that was falling down around us.  The Meijer bucket really fit the decor much better.

More importantly, (two) it was ceramic.  A child is in charge of taking the compost out to the compost pile.  It was only a matter of time before that child dropped the ceramic on the concrete walkway.

Each day at chore time, I was a nervous wreck.  As the child headed out the door, I would remind him, "Be careful!  That is fragile!"  (Always pronounced fra-gee-lay, thanks to A Christmas Story) and then I would pray that he made it back safely.

I only had to go through that daily torture for 3 weeks before the child came in crying and upset that he had dropped the ceramic compost bucket.  It was no longer a bucket but a hundred ceramic pieces on the walkway.

1.  This last gift is so, so bad that I really should have just given it all ten slots and called it a day.  At least then I wouldn't sound like such an ungrateful heel.

The worst gift ever given to a wife by a husband...

After gaining 45 pounds during pregnancy, I delivered Phoenix in September, then celebrated my birthday in November.  For that birthday he gave me...

He thought I would want to see how much weight I had lost since giving birth.