Gone With the Wind Can Get You Through Anything

Hubby and I like to take tours.  Lots of tours.  Tours of anything and everything.  We've toured tons of old mansions, presidents' homes, and battlefields.  We've been through establishments making candy, beer, and wine.  We've even toured the old hospital of an asylum where experiments and surgeries were done, where jars of brains and body parts lined the walls.  We can safely say that I know my tour-guide lingo.  I know how to point things out and tell the stories.  So, today, rest assured that you are in good hands when you take a tour of our kitchen.  You may not want a tour of our kitchen, but there is a point, and it's free, so just go with it.

I always like a tour that has the tour-guide in period attire, so picture me in a big ol' Civil War era gown.  Scarlett O'Hara-like.  But not the curtain dress.  I'm not a fan of tassels.

Welcome to The Coop.   The house was built in 1866, and the land was dedicated to being a large pig farm.  Five families have owned it since then, and with each family the house was changed to fit their style and needs.  We'll start our tour in the kitchen.  Please watch your step as you walk through.  The kids aren't very good at putting their shoes away, and I'd hate for anyone to trip.

If you look to your left, you will see a little bit of each of the homeowners in the way this wall is set up. 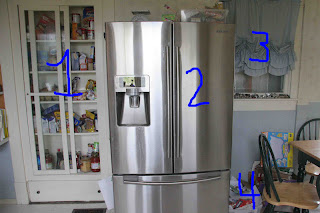 1.  On your far left is the pantry.  When this kitchen was built, we assume the pantry doors worked.  That would have made the use of the pantry much easier.  As it is, the person putting groceries away must simply toss the food to the back, where Mom either forgets about it or wrenches her back trying to reach for it.  The pantry has been left in it's original state, mostly because no one knows how to fix it.

2.  There is no way that the family who added the kitchen could have predicted the modern conveniences we enjoy.  Notice that the refrigerator is simply floating in the middle of the wall.  When the kitchen was built in 1930, there was no such thing as a refrigerator like this, so there is no special place for it.  The fourth homeowners simply stuck it up against the wall.  When the current owners had to purchase a new fridge, they simply went with the status quo.

3.  Just to the right of the fridge is a fun little detail of the house.  Through this window, you can see how the door that used to be here was bricked up.  We know there was a door, because there are steps outside leading up to this very spot.  Why the former owner decided to put a window here, we don't know.  We're hoping it's not just so they could show off their fancy new curtains. 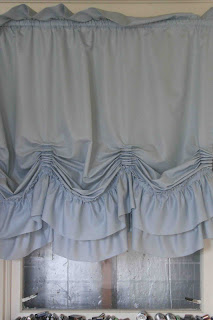 4.  Below the "window" you'll see the batteries, paper, and cardboard waiting to be recycled.  Back when the house, and then the kitchen, were built, there was no trash service.  Trash was simply thrown into a pit in the back yard.  Of course, they didn't have nearly as much trash back then, either.  This current family is very conscious of the environment and sacrifice the look of their kitchen for the sake of the planet.

At this point, does anyone have questions?  OK, let's move on.

If you will turn your attention to the back wall, you will notice the cabinets and counter top.   Sadly, the back splash hasn't withstood the test of time.  We are fortunate, though, that the wallpaper was put on securely.  It's a very good representation of the time period. 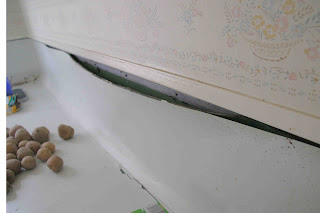 Moving on around the room, you will see the shoe area. 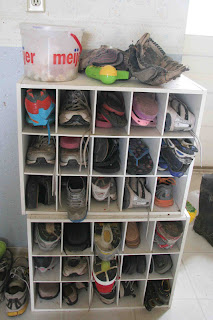 It is unclear what the early families did with their footwear.  Of course, they didn't have cleats or running shoes back then and wouldn't have use for a shoe cubby like this.  However, we do know that this was a pig farm, so there was plenty of mud- and poo-covered boots.  As there is no mud room in which to enter and clean up before entering the kitchen, we would love to know how they kept the kitchen clean.

The Meijer ice cream bucket is where the current owners collect the compost material.  In days past, they would have had a slop bucket.  We would love to know where they kept that, too.

To the right of the shoes you will find the door.  The one that goes directly outside and allows the mud- and poo-covered footwear into the house. 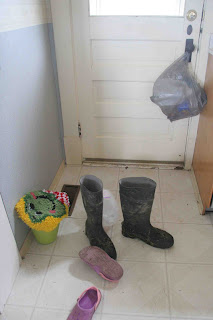 We have to assume that since 1866 mothers have been annoyed with the filth of her floor and the smell of the boots thanks to this door.

To the right of the door, you will find the sink, and above it the window that actually looks outside.  We think that the previous owner didn't actually care for fresh air, as he painted the window shut.

We ask that you please don't touch the faucet.  The current owners were told to install a water-saver by their children's school.  They obliged, always wanting to help the environment.  Unfortunately, the piece broke after just a few months, and they can't get the piece off.   If you were to use the faucet, it is likely that you would get sprayed with an unruly rush of water. 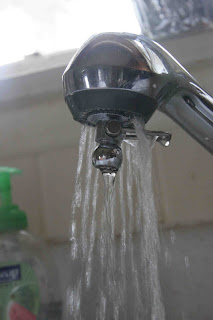 To conclude our tour of the kitchen, I ask that you look up. 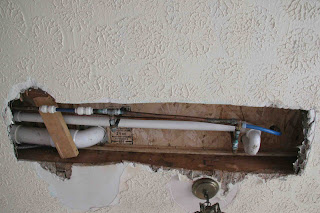 You are fortunate to be able to see some of the original pipes from when the kitchen was built in 1930.  There were a couple of leaks in the upstairs bathroom, so a few pipes did need replacing.  Notice how rusty and old those pipes look?  That is an indication that these pipe could blow at any given moment.

Well, we have concluded our tour of the kitchen.  Kindly keep moving on into the dining room and stop at the line of Matchbox cars.  There I will give you a history of the filthy pink carpet...

This morning I signed away a good chunk of our savings in order to get a new kitchen.

In the next two weeks I will be picking out cupboards, counter tops, flooring, lockers, faucets, lights, colors, and myriad other things of which I don't even know about yet.

In three weeks, my kitchen will be ripped apart, down to the studs.  For 4-5 weeks my family will be living with a refrigerator and a grill.  Our downstairs bathroom sink is the size of a dollhouse's sink.  We chose it so the little kids could wash their hands without being held up to the sink.  We never guessed that it was going to have to do for out kitchen sink.

All day long, I've been wandering around thinking, "What in the world have I just done to myself????"

Sure, it will be a great kitchen.  And the best part is, we will be busting through the back wall to convert that old smoke house into a mud room.  It will be a dream come true.

I'm just having a few panicky moments about the nightmare I will have to endure to get to that beautiful dream.

Since I'm already dressed like her, I wonder, what would Scarlett do in this situation?

When I am looking through all of the choices, my head swimming in shades of brown, I will say, "Great balls of fire!  Don't bother me anymore, and don't call me sugar!"

OK, I doubt the cabinet guy will call me sugar, but when channelling Scarlett O'Hara, you just have to go with it.

When the boxes are looming, simply waiting for me to fill them with crap from the kitchen, but I have school, soccer practices, cross country meets, laundry, and thousands of other things calling me, I'll simply say, "I can't think about that right now.  If I do, I'll go crazy.  I'll think about that tomorrow."

And when my kitchen is torn up, we have no stove or oven, no sink big enough to fill a cup, food and can openers stuffed in boxes stacked in the piano room, and children rolling on the floor, whining for a decent meal, I will go outside, stand under our prettiest tree, grab some dirt and proclaim, "As God is my witness they're not going to lick me.  I'm going to live through this and when it's all over, I'll never be hungry again.  No, nor any of my folk.  If I have to lie, steal, cheat or kill.  As God is my witness, I'll never be hungry again."

OK, I doubt it will come to stealing, cheating, or killing, but I'm sure the kids will be reassured to know that I would do anything in order to get them something good in their bellies.

If any of you have ever done a full kitchen remodel, give me some tips.  Share your hard-earned wisdom.  Show me the mistakes I need to avoid.

And if you don't have any tips, at least send some wine.  I'm afraid Scarlett and I are going to need some by the end of all of this.
Have a lovely day!
at 12:16 AM

Email ThisBlogThis!Share to TwitterShare to FacebookShare to Pinterest
Labels: my thoughts, our renovations