If You Are on a Diet, Just Come Back Tomorrow

On Saturday night I threw a going away party for one of my best friends.  She's moving to Japan for three whole years, so I decided we would have a real American BBQ to send her off.  Who knows when she'll get to eat our "normal" food again?

The plan was to set tables up under the tree out front (after getting rid of any random raccoon and bird remains, of course) with tablecloths and flowers.  Very fancy for the farm.  As in, it's never happened before.  We had to wait until 5 minutes before the party started to actually set up.  The entire afternoon it looked like we might finally get some rain.  We didn't.  It turned out to be a perfect evening for an outdoor party.  (One benefit of a drought, no mosquitoes to drive you mad.) 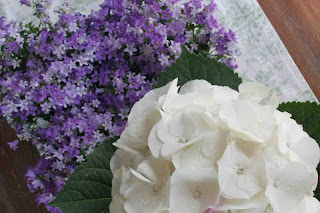 On Friday, I did the grocery shopping and started the prep work for the food.  All went swimmingly until the pie.

The kids believe that the timer on the stove is a video game timer and nothing more.  When the timer goes off, to them it simply means some one's time is up, so they just turn it off.  The video game player will be alerted to the time up signal by the person behind him in line to play.

This is a problem when I am baking something.

The pie was halfway done when I went upstairs to help Phoenix and Star pack for camp.  They were in and out of the room, up and down the stairs while I stayed in their room to help.

After a while, I started thinking that the timer for the pie should have gone off by then.  I went downstairs to find that the timer wasn't keeping time of anything.  And my pie was way overdone.  Which is when my frustration came out.

"Who turned off the timer????!!!!"  Can you hear the frustration in my voice?  It is not the first time that this has happened.

I gathered and grilled the big kids.  No one remembers doing it.  It has become that much of a reflex.  (I know, someone could have been lying, seeing as how irritated I was.  But my kids are terrible liars.  I can spot it a mile away.)  I then asked Turken if he turned it off.  He answered, "No, I'm not tall enough to reach it."   We never did find the culprit.

So, I was stuck without a pie and no time to make another.   I moved to Plan B.

Plan B should be in every one's back pocket.  It is the simplest dessert to make, yet tastes so very good.

Let the ice cream melt a bit to make it easier to mix.  On low speed, mix the ice cream, Cool Whip, and peanut butter.  Pour the mixture into the pie crust.  Drizzle chocolate sauce on top.  To make it fancy, I drizzle in waves, then use a butter knife to drag the sauce in the opposite direction. 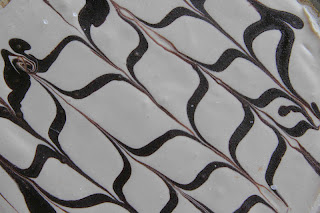 Cover and put in the freezer until the ice cream sets.

I usually make two of them at a time, since the recipe calls for half a gallon of ice cream and half a container of Cool Whip.

And because it is such a big hit everywhere, I'll let tell you of the other dessert I made, what Grandma calls Chocolate Delight.  However, I was told at the party that it has another name, The Robert Redford.  Named as such because you would be equally happy having either the dessert or Robert Redford.    It really is a little bit of heaven.

Preheat oven to 350.
Mix (I use a fork or my hands) the butter, flour, and walnuts until crumbly and pat into a 13x9 pan until slightly brown, 10 minutes or so.  Let the crust cool completely.

Mix on low speed the sugar, cream cheese, and 8oz of Cool Whip.

Sprinkle with crushed walnuts if desired.

Cover and stick in the fridge.

Man, this stuff is good. 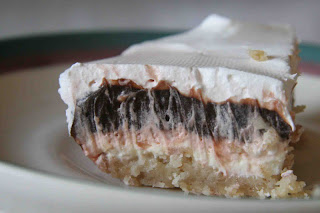 The dishes I made for the meal were really good and super healthy, but those recipes were from cookbooks and magazines.  The desserts are recipes that my grandma always made for me.

So, the party is over.  The house is (mostly) back in order.  My friend and I are in panic mode, seeing each other as much as possible before she leaves on Saturday.  We're both trying to ignore the inevitable, but every once in a while the thoughts creep in and I get sick to my stomach.

I know it will be a grand adventure for her and her family, but I'm still selfish and sad.

Although, the leftover desserts certainly are helping.

Can we say, "emotional eater?"