Back on the last day of school, the kids made a list of things to do this summer.   I almost made them stop after the first suggestion.  Of all the things they could do, the first thing out of their mouths was the one thing I despise more than any other activity the kids could choose.  They know this about me.  Yet the second I give them the opportunity to come up with a wish lists of things to do, the little snots hop all over it.

They want to build a fort.

I am a very easy-going mom.  I let them do all sorts of fun things, as I have proven here, here, here, and plenty of other places.  But when a child suggests this activity, or heaven forbid, starts building the fort without asking me first, I cringe.  Actually, I tense up, holler, "NO!" and immediately start scrambling for a reason to back up that no.

Unfortunately, they love building a fort more than anything.  Probably more because it is a forbidden treat than because they actually like doing it.

As it has been and will be at least 516 degrees every single day for as far as the eye can see, and we haven't had a drop of rain since June 4, playing outside is quite miserable.   We don't have anyone coming over all week.  The kids have been behaving and getting along quite well all summer.  So, I agreed to let them build their blasted fort.

When I told them, you'd have thought that video games suddenly started falling from the sky.  The cheering.  The jumping.  The hugging.  I had to suck the fun out of that party real quick, before they began their sprint around the house to collect as much junk as they could find from every room in the house.

Rule #1:  The fort will be confined to the piano room.  It will not ooze out into other rooms of the house.  You will carry only what you can actually carry without dropping miscellaneous pieces of junk on your way to the piano room, because we all know that you will never in a million years come back and pick up what you dropped.

Rule #2:  If there is any fighting in the construction of or the playing in the fort, the fort activity will come to a screeching halt.

Rule #3:  The fort will remain in this room for two, and only two, days.  When I say, "It is time to put the fort away,"(while I have my turn to cheer, jump, and hug), the children will immediately stop, drop, and roll their way to the fort, where they will...

Rule #5:  If there is any bickering, lallygagging, whining, or feet-dragging while they clean up, they will not be building another fort until they literally own their own homes.  It will never again happen in my house.

They all eagerly raised their right hands and agreed to the rules before they took off for all corners of the house.   This is where all of that encouraging I did over the years for them to stretch their minds and be creative came to bite me in the rear. When building a fort, they are nothing if not creative.

In this first photo, you will notice the number of blankets yanked from my beautifully organized linen closet. To be (A) draped over the upside-down piano bench precariously placed on top of the piano, and (B) hung from a nail, just waiting for someone to pull out the stitching Grandma took oh so much time to knit. 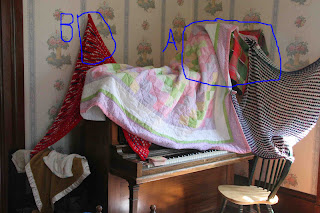 Next, you will notice the unbelievable number of shoe boxes that they have drug out of the basement to build the walls of fort number 2.  This annoys me for two reasons.  One, it appalls me that I have had to purchase that many shoes.  Two, it throws in my face the fact that I have not purged the basement in quite a while.  I was very nicely settled into ignoring that chore, thank you very much. 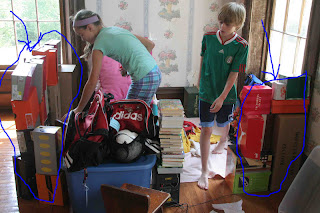 Sometimes, they walk that line of rule breaking.  I did say no ooze.  Does this qualify? 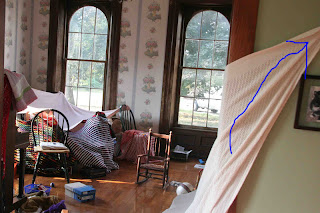 In the construction of fort 3, Phoenix had taken a photo off of the dining room wall, wrapped the corner of a blanket around the doorway, and hung it on the nail where the picture used to be.

Once the forts were built, they drug in all of the stuff they will need to "live" there. 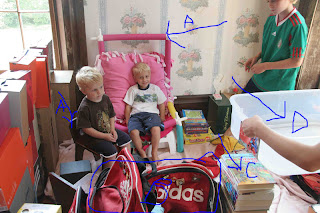 Notice (A) the noodles and the little chair from the playroom, which they used to build a seating arrangement.  Underneath Turken are the only two stools in the house.  We know that the stools are under there because we had some difficulty when it came time for Cuckoo to go to the bathroom.  Also notice (B) the kids' soccer bags.  They serve no purpose as of yet, but someone brought them down just in case.  And then, (C) they have a tall stack of books.  Not to read, but to create a doorway into the fort.  And finally, (D) an empty tote.  Right under Buttercup's hand you will see a photo of what is supposed to be in that box.  Any idea where those toys may be?  Yeah, me neither.

To try and slow my heart palpitations after viewing this mess, I zoomed in on that cute little thing grinning at me. 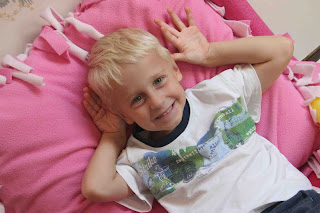 Thanks to Turken I left the room without sighing or groaning or crying.

I especially don't like the inevitable curve ball.  Something I never could have predicted, so I couldn't make a rule for it.  There is always a curve ball. 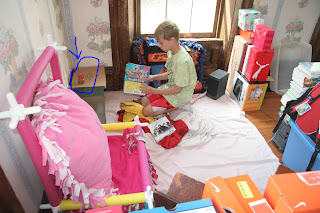 Notice that tiny little container, looking all innocent on their "bookshelf."  It didn't register when I saw it.  Later it did.  That tiny container was the curve ball. 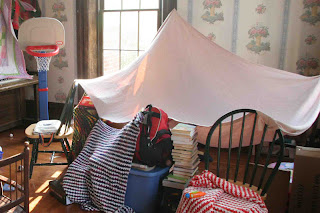 The large, pink blanket was attached to the window frames with the pushpins in that tiny little container.  Pushpins.  Many of them.  In my original 1866 woodwork.

Once their forts were made and fully stocked, they began the "Can we sleep in the forts?" pleas.  Sure, when the sun is still up they are all agreeable, promising that they will simply sleep.  They show me how it will work. 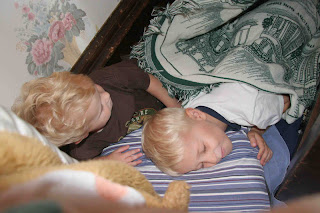 Except that it won't work.  Not a chance that they will sleep in these things.  I put my foot down and tell them no.  There will be no slumber party in the piano room, which is right next to the family room, which is where Hubby and I spend our one short hour alone at night, saying things the kids don't need to hear and eating things the kids don't need to know about.

Finally, the fort came down today.  When I said it was time to clean it up, they immediately got to work.  It was the first time ever that I actually prayed for an all-out brawl to break out.  Oh how I wanted them to break Rule #5!  To be able to say that they would never, ever be allowed to build a fort again.

But alas, they didn't.  They very quickly got the entire room cleaned up without one sour word.  And I actually saw them very carefully folding every single one of those blankets.  Blast it all.

It looks like they will be allowed to build another fort someday.  Some day far in the future, but someday nonetheless.   Bummer.

Is there any activity that your kids love but you dread?