To prepare for the three full, hot days we were going to have at home, I stocked up on sunscreen, popscicles, and ice cream cones, and I warned the kids that it was going to be a working weekend with a bit of fun thrown in.

We spent a good number of hours getting personal with weeds.  In the garden.  In the flower beds.  Circling the walls of the house and outbuildings.  Weeds of all shapes and sizes.  Every once in a while, a child could be heard to say, "Is this a weed or a plant?"  To which Turken, the expert in all things garden, would run over shouting, "I know what the plants are!  I'll tell you!"

Buttercup and I spent a good chunk of time on the Dixie Chopper, which resulted in plenty of grass clippings.  As a family, we raked, collected, hauled, and laid those clippings in the newly weeded garden.


Several hours were also spent on trees.  Cutting down little trees popping up where they shouldn't be.  Grinding up fallen branches.  Dragging large branches to the burn pile.  Hauling the new mulch to the newly weeded flower beds in the back of the house.  (Where, within minutes, Roy the Wonder Dog dug up and claimed the lovely areas as his cooling-off spots.)

At one point Giant did ask, "Why is it that we picked the one weekend where it hits 95 degrees every day as the weekend to do all of the outside work?"  And Buttercup did mention that her class discussed chores at school last week, and some kids in her class don't have to do anything more than get the mail out of the mailbox each day.  But pull out the popscicles and the minor complaining abruptly comes to an end.


Memorial Day Weekend in Indianapolis means the Indy 500.  Phoenix and Star went with the Boy Scouts to set up and work the parade on Saturday, then on Sunday we had our annual family Race Day tradition.  One of the kids cuts the driver bios out of the paper and puts them in a hat.  We each draw names until they are gone.  During the race, prizes are given out for different milestones.  For example, at lap 50, whoever has the lead driver gets a Tootsie Pop.  At the end, the winner gets to be the first to choose a prize from the prize pile.   This year, Giant was the big winner, and he chose the big bag of Twizzlers.  When it came to Cuckoo, he decided that the Whoopee Cushion was calling his name.  He has been playing with that blasted thing ever since. 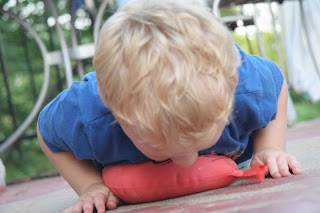 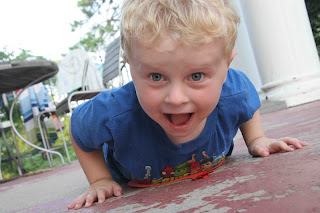 To end the weekend of hard labor, Hubby set up the baby pool and slip-n-slide for the kids to cool off and have some fun. 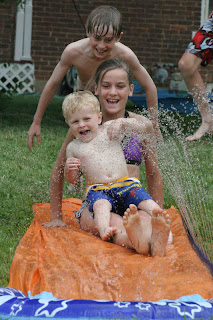 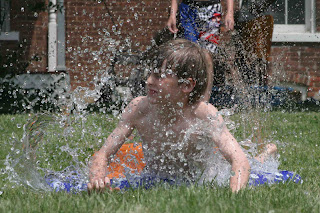 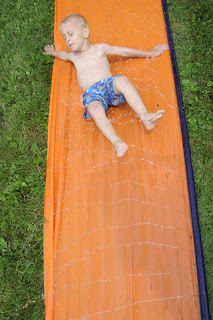 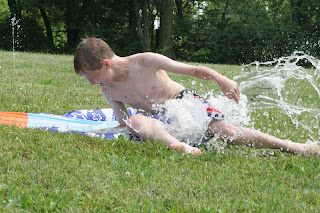 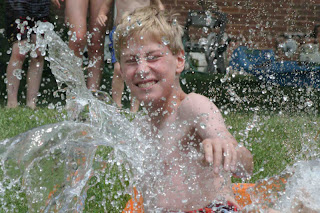 I pulled out the ice cream, because nothing says summer like a drippy ice cream cone. 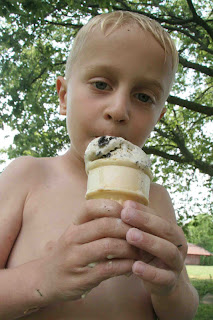 We realized as we were dishing them out that it was Cuckoo's first ice cream cone ever.  He had no trouble figuring out how it worked. 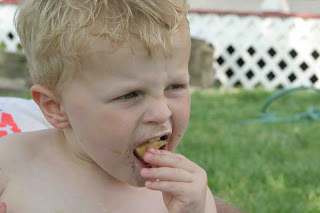 Hubby has been talking for a while about wanting to put in a pool.  Although it works, I don't think this is what he had in mind. 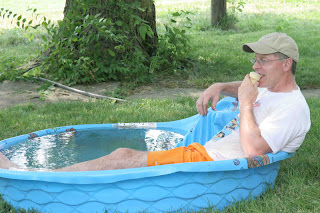 Just when we thought that the weekend was coming to an end, and I was trying to figure out what to make for dinner, a strange truck pulled into the driveway.  We assumed it was one of the many people who were simply turning around (because people actually do get lost, then drive all the way up our 1/4 mile drive, just to turn around) until it actually parked.  It took us a few seconds to realize that in that truck was our favorite family in this whole wide world.  Our very best friends that moved away three years ago.  The friends that we haven't set eyes on since I surprised Buttercup for her birthday over a year ago.  They were in the area for a party with people from their old church, couldn't reach us since we were outside all day, and decided to just stop by in case we really were home.

The kids piled out of the truck, hugs were exchanged left and right, and we all fell into our normal, like no time had passed at all.  Cuckoo, who was an itty, bitty baby the last time we got together, jumped right into Miss A's lap and never left.  The other kids ran off to the barn to check on the "house" they built all those years ago.  They climbed trees, played Capture the Flag and tag, talked, laughed, and ate strawberries till their hearts' content. 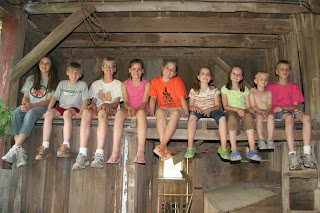 While out weeding, I had the thought of inviting some friends over for a cook-out.  My idea came to a halt when I came inside for something and saw the state of the inside of my house.  Grass, dirt, hats, sunscreen bottles, water jugs, and miscellaneous stuff was everywhere.  No way was I going to invite anyone over to this sty.

And then my bestest friend drops in with her family.  And the mess didn't matter.  They didn't bat an eye as they stepped over and worked around the disaster.  We have seen each other at our worst and our best, and there is no judgement.  No shame.  Just friends enjoying the rare treat of spending time together.

As I sit here trying not to scratch the amazing amount of poison ivy rash I picked up this weekend, I can't help but smile.  As Buttercup said during one of our water breaks, "We're doing a lot of work, but we sure are having fun while we do it."

You said it, sister.

With sweat pouring down our backs and dripping off our noses, we were telling stories.  While blisters were forming on our hands, we joked and played around.  As our muscles burned through all of the bending and lifting, we all chuckled at the way the little boys helped.

Yes, my kids do have more chores than anyone else they know.  They don't always have smiles on their faces, but they still work hard.  They are learning that hard work does not equal drudgery and unhappiness.  Fun can be found even in the hardest of jobs.  It's all a matter of what attitude you choose.  This weekend we chose happy, positive attitudes.

And it was wonderful.