As Usual, God Did Know What He Was Doing

This is for all the moms who are in the middle of raising an extremely difficult little one (or two).

For the mom who has had to do the walk of shame out of every store she's ever been in, dragging a screaming and kicking toddler to the car, many times without buying a thing.

For the mom who has had both relatives and friends tell her that they will not watch her not-so-adorable, strong-willed child.

For the mom whose stomach is in knots every time she leaves the house, worried about when (not if) she will have to pull her preschooler off of a sibling because the preschooler, in his own eyes that only see black and white, was slighted by the other.

For the mom who has felt the glares of judgement being directed completely on her for raising such an ill-behaved child.

For the mom who is scared to pieces about what this little boy will be like when he is older, bigger, and stronger, when she will be unable to pull him off of a sibling.

For the mom who cries at least a few times a week, if not daily, because she feels inadequate, frustrated, helpless, and scared, sure that God has given her the wrong child.

I have been there.

And Giant, that child who caused me so many tears, headaches, shame, and confusion once again proved to me that it was all worth it.

Knowing that he, Phoenix, and I would be leaving at 6:00 in the morning on Sunday for a soccer tournament, Giant came into my room at 5:00am.

I heard him bumping into things on his way to my bed, and I asked if he had had a bad dream.

His little voice answered, "Are you ready for your breakfast in bed?"

That little nine-year old boy had gotten up at 4:00 to get my breakfast ready.

And it wasn't just a bowl of cereal.

He got out my Betty Crocker cookbook, found the pancake recipe I use, and made me some pancakes. 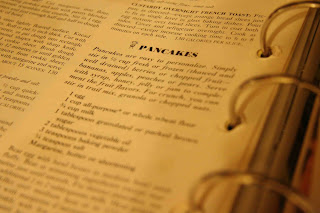 He was worried that they wouldn't taste good, so he added chocolate chips to the batter.

And he didn't just bring them up to me.  He presented them. 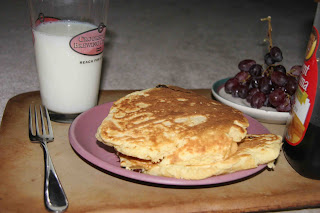 I am so glad that I let him live past the age of five.

Giant rarely shows signs of his younger, volatile self.  These days he is happy, compassionate, hard-working, and so very loving.  He is welcome in any home.

It took a whole heck of a lot of work to get here.

For those of you in the situation we were in a few years ago, keep praying and working hard to teach your little one.  To learn his triggers, his preferences, and his needs.  It will get better.  It took us years to claw our way out of the pit of self-doubt, but we made it.  You will, too.  In the meantime, here are some of the things that worked for us.

1.  At the age of three and a half, I gave him a watch.  It was the best thing I ever did for us.   It ended the tantrums each and every day over what time he was going to do things.

Our new routine started with me asking something like, "We will be putting shoes on to leave the house at 8:35 today.  What time will you be getting dressed?"

He would usually say 8:00.  I then left him alone.  At 8:00 he would go upstairs and get dressed.  He picked out his own clothes, because that is a battle I had no desire to fight.  Mismatched clothes are cute on a three year old, right?

2.  If he was having an especially bad day, the "punishment" would be that he had to be by my side the rest of the day, helping me with whatever I was doing.  Even though it sounds like torture for both of us, (and for the first half hour it was) it really worked, and for a variety of areas.

I was able to keep an eye on him, which meant his siblings were safe from his outbursts.

He got the individual attention that he so desperately wanted while I got to have time to learn more about him.

He happly learned how to do all sorts of things (like how to cook and make my breakfast!)

He got his mind off of whatever was bothering him and calmed down.  The end of these days were always good ones for him.

3.  Being consistent is imperative.  A rule is a rule is a rule. Today, tomorrow, next week, and next month. Consequences will always follow the behavior, GOOD OR BAD!  It didn't matter if I was worn out and completely not in the mood, I had to suck it up and follow through., both when he broke a rule, or when he did something well that got him a good reward.  Which leads me to...

4.  Focus on positive behavior.  If I saw him say, get up and walk away in a situation where he would normally scream and hit his brother, I hopped all over it.  Told him how proud I was for handling the situation correctly.

5.  Let him cool off.  Almost without fail, he would feel terrible after he threw one of his out-of-control tantrums.  He just needed the time and distance to cool off and think about things.  When he was in the midst of his craziness, he honestly didn't know what he was doing.  He couldn't remember what he had done.  So instead of getting in his face to try and help him calm down, I would send him to his room.  He wasn't happy about it, and the calming down took some time, but it would happen.  Eventually (over years) he got very good at removing himself from the situation.  Even in public.  He would get all worked up at a park and take off running and hide behind a tree.  In the early days, I would go after him and he would get into trouble for running away from me.  Once I figured out what he was doing, I let him go.  I'd watch him like a hawk, but I'd let him go.  Five minutes or so later, he would come back to the group, calm and ready to talk about what happened.  Which leads me to...

6.  Talk about what happened when he is calm.  We discussed what made him mad, what his options were, both good and bad, and what the consequences of each option would be.  I cannot tell you how many millions of times we had the same conversation.

7.  Patience is key, both in the immediate situation (don't raise my voice and get angry with him) and over time.  He did not learn better behavior overnight.  It took years of talking, disciplining, loving, and praying for both of us.


If you find yourself in the midst of an incredibly loud and embarrassing tantrum out in public, know that not everyone is judging you.  Some of us are feeling your pain and saying a prayer for you.


We'll end with some pictures of one of the flower beds the other kids cleaned up all by themselves.  Hubby was working in the garden while Buttercup, Star, Turken, and Cuckoo weeded and planted all of the new flowers they picked out. 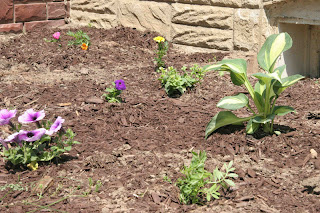 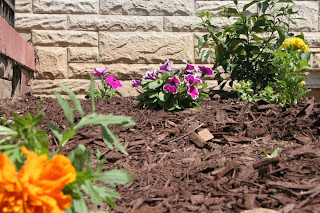 Yes, I had a great Mother's Day.