I started this post this morning. Many hours ago. I haven't linked up with Kelly for a while, so I thought I'd catch you all up real quick.

That was many hours ago.

Now I should be working on my Ten Things of Thankful post, seeing as how it goes live right about now.

I received a note from Turken's teacher yesterday. Basically, she noticed he had marker all over his shirt. She asked him a few times how it happened, and he insisted he didn't know.

I replied, "That is our life with Turken," except I rarely ask him how anything gets on him. He has no idea. The reality is, he is constantly fidgeting, and if he has a pen, marker, or anything else in his hand, it will be all over him in no time. He has even been known to write on his face, having no idea that he has done it.

Each morning when he comes downstairs, supposedly dressed and ready for school, he looks like he got roughed up by someone looking to abscond with his lunch money.

When he is doing anything while sitting in a chair, like eating or doing homework, he frequently disappears.

When he eats a meal, a good portion of the meal ends up on the table, the floor, and his clothes.

He is almost incapable of doing any task without stopping at least three times to attend to other things, usually forgetting what he was doing in the first place.

It makes getting out of the house with him a long, drawn-out affair.

This is life with our adorable Turken.

I had a dream last night. I would almost consider it a nightmare. For some reason, I had to catch a plane as quickly as possible. I called the airline, and of the three choices, I chose the earliest one, even though it meant I only had an hour to catch it. I wasn't even packed yet.

Oh, and Turken was going with me.

I had a dream in which I was trying to rush to pack and get out the door, with dear, little, I-can't-do-anything-quickly-no-matter-how-much-you-want-me-to-or-how-hard-I-try, Turken.

Seriously, when the first alarm (I'll explain in a bit.) went off, I was awoken from a dream in which I was in a full-on panic, with only 20 minutes to get to the airport, but I was standing at the front door trying to get Turken's shoes on him.

This is life inside my brain.

Cuckoo sleeps in just his underwear in order to facilitate a speedy school preparation in the morning.

His clothes for the next day are laid out next to his bed.

His backpack and jacket are laid out next to his clothes.

When he comes downstairs each morning, (before breakfast!) he is not only fully clothed, but has his jacket and backpack on.

He eats breakfast and brushes his teeth with his jacket and backpack on.

This is life with Cuckoo.

Bryan and I have a really old alarm clock. It no longer has an adjustable volume. There are now only two settings, either barely noticeable or howler monkey.

It's been on barely noticeable for awhile now, and we haven't had any trouble. Except the one day last week when it didn't make any sound at all.

I was awoken by someone going downstairs 9 minutes after the alarm went off.

We jumped out of bed, ran to wake everyone up, and scurried around to get everyone out of the house on time.

That night, as we were putting the kids to bed, Cuckoo gave me his Batman clock he had received for his last birthday. He loves that thing. It's a giant Lego Batman.

He handed it over and said, "Use this so we can wake up at the right time tomorrow."

So, now we have our alarm, which decides on its own which days are howler monkey days and which are barely noticeable days, and each day, 45 seconds later, just as I've dragged myself out of bed and into the bathroom, Lego Batman starts beeping.

This is life at our house.

For over a week now, the soap dispenser in our master bathroom has been empty.

Ya, the dispenser has run dry.

For over a week, I have been having to reach in and grab the soap from the shower to wash my hands, then put the soap back in the shower.

Normally, I leave a giant refill bottle in each bathroom, so I can simply and easily refill the almost empty dispenser.

But the gigantic bottle ran out.

And I forgot to replace it.

And every single time I leave the bathroom, I forget that we have no soap in it.

Until I use the bathroom again.

And have to use the soap from the shower.

This is what life is like without a working memory.

So, don't know if you've heard, I had oral surgery last week. This week, the stitches and bandages came out, so I'm feeling muuuuuuch better.

In the portion of the appointment when I was given instructions on the care and keeping of horribly sore gums, I was told, "You have to use this really, stupidly expensive toothpaste. Your gums will bleed when you brush them. Probably a lot. Keep brushing them through the blood."

Ya'll paying $15 for toothpaste is bad enough, but brushing while I bleed all over the sink?

It's as bad as you're picturing in your head. And as you gag and run for the toilet to vomit from the image now in your brain.

I was also told that I no longer will be flossing the back teeth where the gums were removed. I now get to use these teeny tiny brushes that bend and go in between the teeth. As I was told at my appointment, "The space between your teeth is bigger now, so you can clean it better."

See, I have mongo teeth but a little mouth. When I was in 4th grade, I had 8 teeth pulled, 4 adult and 4 baby. And still my teeth are snug. Getting floss in between is a chore. My wisdom teeth, which were still kinda covered by my gums were even worse.

I now have a bigger space.

So I can clean better.

Ya'll, the space is big enough that I no longer need to pack an afternoon snack for myself.

Plenty of food waiting between my back teeth to shove out with a teeny tiny brush to curb those afternoon munchies.

This is life with terrible, inherited teeth.

And guess who is so happy to hear that this is all hereditary! 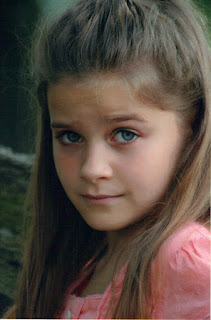 Short story from when she was about 6 years old:

We were playing the game. In the game, a team is given a category, and the team has a short amount of time to come up with the 10 items in that category.

Her team was given the category "natural disasters".

Everyone started shouting their answers, things like tornado, hurricane, and earthquake.

There was a lull when everyone ran out of guesses.

In the middle of the quiet, Buttercup shouted, "The playroom!"

While yes, I miss that sweet little face of her younger years, I am loving the teenager she is.

She's compassionate. She's hard-working. She's smart as a whip. She's not afraid to speak her mind.  She's hilarious. She's responsible. She's got a good moral compass. She is a slob.

Every room in this house has something of hers that doesn't belong there.

Her bedroom is a disaster.

This is life with my peach, Buttercup.

And now I am off to start my Ten Things of Thankful post.

We'd love for you to join in with us! The link is live at Lizzi's. My post and link will be up tomorrow.